22/04/20 The UK is “at the peak” of the corona-virus outbreak, Health Secretary Matt Hancock has told MPs – on the same day the number of UK hospital deaths rose above 18,000.

On a more amusing note, I watched a YouTube video shared on Facebook by a friend which really made me chuckle: ‘The liar tweets tonight.’

In brief: During the morning, I washed and waxed Sue’s Suzuki Alto and watered the vegetable plot and vines. Sue posted a letter. In the afternoon, I potted on some cucumber plants in the greenhouse. A slow, quiet day in lock-down at Willow Bank. Last night the Rothwells stayed up late and made themselves comfortable on the lawn to watch Elon Musk’s Starlight satellites and a predicted meteor shower. Unfortunately, Ellis couldn’t quite stay awake to see the meteorites. Sarah had Abby visit her today to drop off some gifts for the baby.

For the second time since lock-down Whats-app malfunctioned. On the first occasion I was using the App to talk to Brigitte in Leicester when Jim and Kate Crawford suddenly joined the conversation. It happened again today, Brigitte was chatting to her husband Jim in Cyprus, I  was using my mobile to solve a crossword when suddenly there was Jim and Brigitte in conversation. Unlike the previous occasion which was a video call, this was voice only with our three photos being displayed. The three of us chatted for a while and I discovered that Brigitte was hoping to rejoin Jim in Cyprus in a few weeks as the Cypriot government were planning on resuming repatriation flights. I believe that Cyprus has only suffered 19 deaths due to Corona-virus, so that seems a pretty good move, though I suspect the grandchildren will miss the company of their Nan.

23/04/20 A total of 18,738 patients have died in hospital after testing positive for corona-virus in the UK as of 5 pm on Wednesday, the Department of Health said, up by 638 from 18,100 the day before. The Health Secretary said: “From today employers of essential workers will be able to go on gov.uk to get a test for any of their staff who need a test. “And from tomorrow any essential workers who need a test will be able to book an appointment themselves directly.” As Suraj, Lee and Jamie are on the essential workers list I expect that they will have the option of being tested, though I do wonder if you haven’t developed any of the symptoms whether it is necessary? We shall see.

Another quiet lock-down day. Neither of us ventured out of the garden, though we did have a late morning parcel delivery of a bench. The temperature got up to 26 degrees, Sue busied herself cleaning the inside of a her car then made some celery soup for lunch. I replaced a washer on the outside tap that had been dripping for some time and then planted a small vine to replace one that had died over winter. During the afternoon I put together the bench and then placed it around the apple tree. Disappointingly we attempted to watch the National Theatre’s production of Twelfth Night, but the action and sound weren’t synchronised on YouTube and we gave up after 15 minutes. It was a modern take on the story with the original script, it looked interesting. Annoyingly it seemed to play perfectly on my laptop.

For the rest of the adults in the family it was a normal lock-down work day and afterwards they chose to cook exotically for their evening meal:

Jamie made duck something!

Charlotte made keema and potato curry.

Sarah made chicken and potato curry.

We had chicken pie, mashed potato and beetroot chips, followed by melon balls and ice cream.

24/04/20 Today is significant, not because  the corona-virus death toll in UK hospitals has hit 19,506, up 768 from the day before, or because of the dreadful news that two identical twin sisters have died within three days from corona-virus. On Tuesday, NHS children’s nurse Katy Davis, 38, died at Southampton General Hospital where she worked, her twin sister Emma, a former nurse, died earlier on Friday at the same hospital. But, because the man in charge of the of one of the world’s most powerful nations demonstrated to us all what a dangerous idiot he truly is: ‘Donald Trump has stunned viewers by suggesting that people could receive injections of disinfectant to cure the corona-virus, a notion one medical expert described as “jaw-dropping”.’  During his daily address to the nation he revealed a shocking lack of understanding of any of the issues and a complete ignorance of anything medical or scientific. He has a Bachelor of Science degree in economics and a specialization in finance at the Wharton School at the University of Pennsylvania, but obviously no common sense what-so-ever. Perhaps his BSc really stands for Bull Shit clown?

Another quiet lock-down day at Willow Bank. My day was filled with therapeutic mowing and filling two half-barrels with soil in readiness to plant courgettes. Most people would plant them up with flowers to make a pretty display, but I find all types of vegetables pleasing to look at and most importantly, they fill the stomach. Sue spent a day dusting and cleaned the balcony overlooking the pool.

I chatted with Viv and Ian over the garden fence. They have had to shut down their Chiropody practice until June and in the meantime  have been busy buying in PPE for themselves and their patients. The equipment they require is readily available, but they are having to pay quite extortionate prices. It is the way it is at the moment, there are always those who are eager to exploit the misfortune of others. A little later on I wasn’t surprised  when I took a phone call from the NHS to let me know that my appointment with the Podiatrist next week had been cancelled and would be rescheduled. Visiting a hospital in the present climate for anything other than an emergency is fraught with unknowns and I feel slightly relieved I do not have to.

Where is the cot going to fit? 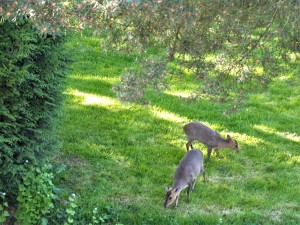 Late in the afternoon, our neighbour Claire, texted to let me know the female Muntjac had made an appearance with her newborn. I watched and photographed him/she frisk manically about across the river, enjoying the freedom of an open space,  while mum grazed patiently on the freshly mown grass. At the same time Mr. Pheasant and his new lady friend came to feed on the grain I had scattered earlier, I think she may have eggs in a nest nearby.

Lee, as well as working from home, has also been fitting out and decorating his study. Today he finished and from the photograph he seems to have made a pretty good job of it.

During the evening I watched Andrew Lloyd Webber’s  production of  ‘Love Never Dies‘, it is the follow on from the ‘Phantom of the Opera’. It was panned by the critics and Sue lost patience after five minutes and left to ‘catch-up’ on her laptop. I watched until the end and enjoyed it. There are no really catchy tunes, the story is good and the singing and acting strong, though the final scene was far too sad for me. I prefer a happy ending. Worth watching.

Breaking News: Ruth got a first  in her University exam this evening. She and Jamie opened a bottle of wine to celebrate.