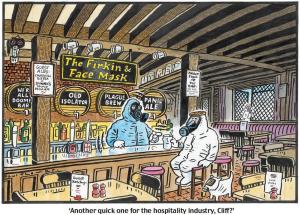 23/06/20 The number of people who have died in the UK after testing positive for corona-virus increased by 280. The government announced today that Downing Street will no longer hold daily press briefings. Boris Johnson has set out plans to allow pubs, restaurants, cinemas, museums and galleries to re-open on 4 July in a major easing of  lock-down in England. The two-metre social distancing rule will be relaxed  to a minimum of “one metre-plus” wherever a two-metre distance was not possible.

The second day of our promised ‘return to summer‘ was indeed a very warm and pleasant day with nary a cloud in the sky. During my morning cycle I picked up Peter’s mail, scanned it on my return home and emailed him with the attachments. I haven’t heard from him for over a month so I left a message inquiring as to whether he still intends to return to the UK. NZ is now virus free so I guess he will be able to fly to the UK, if he wants to.

Sue at last met up with Doreen. They spent the morning chatting in the Memorial Garden in the centre of town. Having been in ‘ultra’ lock-down in her managed apartment block since March, Doreen was glad to get out and talk to someone face to face.

I mooched about in the garden enjoying the sun, tying up a few more grapevines before eventually deciding late in the afternoon that I should do something positive before the day is done. I settled on my least favourite task and painted three short fence panels.

Sarah got some good news today, they can register Alice Thelma’s birth on Thursday. Perhaps they may yet decide to add my suggestion of ‘Buttercup’ as a middle name?

During the evening Jamie popped over to borrow some golf clubs for Joey, they were on their way to the golf range to hit a few balls. Hopefully, if Corvid-19 and time allows, I may be able to organise a round of golf with them, Suraj and Lucas later in the summer. Should be fun.

Britain basked in sunshine on the hottest day of the year so far, the Met Office confirmed the temperature peaked at 32.6C. Before the sun became too fierce, Charlotte and Ellis decided to cool off with a paddle on the water. They drove over early with Harry and borrowed my canoe. While they splashed along the  canal I took Harry for a long walk down the river Welland so that he could cool off and have a drink when he wanted. I brought him back very wet and very muddy. Whilst canoodling Charlotte and Ellis were listening to Steve Backshall, the naturalist on the radio. Taking the opportunity, Ellis sent him a text saying he was listening whilst canoeing down the Grand Union canal, he was later thrilled to hear Steve mention him over the airwaves.

You have to put the bung in?

Nala cooling off on her own canoe.

After they picked up Harry and returned home to Rothwell, I set about cutting one of the rear garden hedges, while there was still shade. I managed to complete the task just as the sun reached its zenith and the sweat started to trickle off my nose. As ‘mad dogs and Englishmen‘ are prone to do, after lunch I followed my morning ‘sauna’ with a couple of hours watering and hoeing the vegetable patch. It took a freezing can of cider and a cold shower to return my body temperature to something nearing normal.

A wiser Sue, stayed inside most of the day and worked on her ancestry charts.

Lucas had a visit from a school friend whose family had been self isolating since last February. No doubt he was desperate to see someone other than his parents. Ruth and Jamie have now purchased their own inflatable canoe and during the early evening they took it for a trial. It was a steep learning curve.

25/06/20 The UK death toll from corona-virus has risen by 149 in the past 24 hours, bringing the official total of deaths to 43 230. A nationwide clap to thank the NHS will take place next Sunday, at 5pm on July 5 – the 72nd anniversary of the NHS, which is hoped to become an annual tradition.
Regardless of the current pandemic, this is the least we can do as a nation to acknowledge the selfless work of those employed  in the NHS. This will be a constant reminder to the present and future governments of the UK and leave them in no doubt that its citizens value and praise the ethos of this institution. Tinker with its core principles: The NHS belongs to the people and is founded on a common set of principles and values that bind together the communities and people it serves – patients and public – and the staff who work for it. AT YOUR PERIL.

A hot sleepless night, brought no respite in the early hours of the morning. Sue and I had planned to attempt a ramble provided by email from the U3A walking group she is a member of, wisely we left the decision to go or not after checking the temperature when we woke. It was 7.30am and 24 degrees, it was a no go! 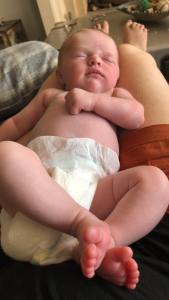 A present from Newbold Verdon WI for Sarah.

I did however embark on my morning cycle, though dressed down to thin shorts, T-shirt and sandals and a much shorter route than normal. Sue sheltered all day inside, working on her Family Tree. I did venture out before lunch to mow the rear lawns at a gallop before sheltering under the shade of the dining room awning to pot up a few flowers. I have no idea what they are, but I found them growing wild under one of the apple trees and decided they might look nice in the raised flower bed by the greenhouse when established.

The first phone call of the day came from Peter in New Zealand, it is winter there and though he is missing the English summer he is no hurry to return yet. He told me that his return ticket with Qantas probably won’t be available until next year. Though life is back to normal for him he is quite concerned that there are new cases of the virus being brought into the country from travellers coming from abroad. My next phone call came from John Lee in Bourne. We agreed to meet up and go for a walk next Tuesday somewhere in Rutland, he offered to plan where. Fingers crossed that the weather is kind to us as we have not seen each other since last October. I then called Jim and Bridget in Cyprus and inquired as to how their house sale was going. The good news is that contracts have been exchanged and they will have to vacate the property before August, they now wait for the Russian buyers to give them a date. My next call came from Jamie, he inquired as to whether we would look after Maddie, Rocky and Nala from the 10th-20th July while he and Ruth holiday in Gran Canaria. Of course we said yes, but I am intrigued as to whether they will have to self isolate for two weeks when they return.