0 A further 128 people have died in the UK after contracting corona-virus, according to the latest figures released by the Government. Spain’s foreign minister has announced Brits will be able to holiday in Spain from Sunday – without having to quarantine. The UK and Spain are still in talks over whether Spanish visitors arriving in the UK will need to quarantine. Upon returning to the UK, most arrivals must isolate for 14 days or face a fine of up to £1,000 if they are caught breaching the measures.

I planted a short row of outdoor tomato plants in the vegetable plot before taking a car full of hedge trimmings to the recycling site. At the dump, I found myself, and one other car discarding waste during my 15 minute slot. I noticed there was seven operatives either standing or sitting, watching the two of us unload our cars. I can understand why they didn’t volunteer to help, but it does beg the question, why so many? Also, we are now permitted two visits per fortnight instead of the previous one. Is this an acknowledgement that one visit is not enough, or is it that the site is not being used as much as expected? Or, maybe the citizens of Harborough are just being more environmentally aware.

On my return, Jamie, Ruth and Joey had arrived to use the canoe. It was decided to have a paddle in Saddington Reservoir, but on driving there we were turned away by a group of fishermen who claimed that boats were not allowed on the water because of Corvid-19 restrictions. The associated sailing club was closed and its website down, so we had no way of checking whether this was true, rather disappointed, we left. I returned home to mow the lawns and pot on some snapdragons, Jamie chose to drive to Whetstone Pastures Farm to pick strawberries to ease their disappointment. After gorging themselves, they called in briefly to drop off the life-jackets on their way home. We didn’t get strawberries!

During the evening Sue and I watched ‘Operation Finale.’ A true story of an Israeli team of secret agents setting out to track down the Nazi officer Adolph Eichmann who masterminded the Holocaust.
21/06/20 The UK’s death toll for corona-virus has risen by 43 to a total of 42,632 people. Germany’s reproduction rate of Covid-19 has spiked from 1.06 to 2.88 in the span of two days, prompting concerns over a second wave of the virus. An R number of 2.88 means that every 100 people who contract the virus would infect, on average, 288 more people. To contain the virus, a number lower than 1 is needed. Have they eased off too soon? Will we fall into the same trap? I think Spain maybe have.

Today was Father’s Day. It was originally founded by Sonora Smart Dodd, and celebrated on the third Sunday of June for the first time in 1910. I chose to rise a little later than usual, waiting for the traditional text greetings from Charlotte, Jamie and Sarah. Shortly after, drinking my wake-up coffee I opened the cards and sent my own thank-you texts. Charlotte, Suraj, Lucas, Ellis and Harry visited mid-morning with a a pair of wellingtons and some cheese and crackers. We spent some time enjoying the sun and chatting in the back garden before they left for home.

While Sue spent time at the dining room table on her Family Tree, reaching back as far as the 1700’s, I set about finishing the tree-seat I had begun at the beginning of the pandemic. After first clearing away the topsoil underneath the seat I then set a layer of cement, spreading 5 bags of blue slate on top. After lunch I visited Homebase and acquired 6 more bags of slate and spread those too. Finishing off I mixed some mortar and firmed up some of the loose stones that held the slate in position. Though at first sceptical about the family’s suggestion that putting ‘something’ underneath the seats would be better, I have to agree, it is.

The rest of the afternoon was spent tying up the grape vines and then the tomato plants in the greenhouse. I finished off by transplanting some lettuce while Sue took advantage of the mounds of top soil I had collected and potted up some succulents acquired from Sarah.
22/06/20 There were 15 corona-virus deaths recorded in the UK in the past 24 hours. The death toll now stands at 42,647. Mr Bean has been signed up by WHO to offer social distancing and hand washing tips to the world. With the UK seriously considering reducing social distancing from 2m, this WHO video is recommending just 1m: Mr Bean’s Advice.

On a promise by the BBC weather lady that the next few days will see a return to summer, Sue and I took the opportunity and drove up to Newbold Verdon to see our granddaughter. It was Lee’s first day back at work (upstairs in his study) so we were greeted by Sarah, Alice and Mia. After spending around half an hour chatting in the garden, we took Mia out for a walk and a picnic, letting Alice, who had been awake all night have a sleep. 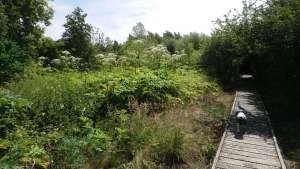 After first discovering our first Geocache of the day outside NB church, our route took us to Barleston, a small nearby village and once home to coal miners, though there was never a mine at Barlestone, the miners travelled to pits in Bagworth, Coalville or Newbold Heath. Passing by a small park near to the edge of the village we came across the entrance to a raised wooden walkway through an area of shrubs and marsh. As a diversion we, followed its snaking path and soon came across some Giant Hogweed, often described in gardening literature as being dangerous. Further into this wilderness of small ponds, swampy ground and woodland we came across our second successful Geocache, hidden under a stone and buried discretely between the roots of a tree. We were particularly pleased as we had previously failed to locate one in the centre of the village and suspected that it had been muggled.

Returning to the park, seated on a bench and table situated at the top of a slope we had our picnic. We had a splendid view of the locals taking their dogs for a walk below, though as usual, Mia was only interested in any crumbs that may be discarded from our mini-feast! 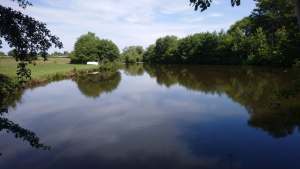 Continuing our ramble we passed by a pretty lake, a large tepee made of tree branches and a huge sheet of tarpaulin was sited on the bank. There was an area set aside for seating and a fire pit, we assumed it was for the Barlestone Scout group. Other highlights of our trek was passing under a huge wind-turbine, hearing the relentless whoosh of the blades magically carving the air into eco-friendly electricity. Further on we had to hurry across a meadow, its grass being scythed into regular lines by farmer and tractor. We found our last Geocache at the base of a post on the outskirts of Newbold Verdon.

On our return we again spent some time chatting in the garden, before leaving Sue and Mia to have a nap in the sun, Sarah, Alice and I drove to inspect their new allotment, just a quarter of a mile away. I had brought my petrol strimmer to hack down the weeds that had forcibly taken over from the previous owner. As Sarah and Alice walked back, I set about my task and within the hour had reduced the plot to something resembling the battlefield of the Somme (without mud).

Returning to Sarah’s I stopped for a much needed can of lemonade before Sue and I drove back to Harborough.