A wet and miserable day in Leicestershire. I saw hardly anyone during my morning cycle, it’s the way I like it. My daily forays are usually along  seldom tramped tracks and pathways, but since the pandemic, my fellow lock-down citizens have been encouraged to discover the joys of exercise and forced into avoiding urban pavements and experience the real countryside. Routes I could rely upon to occasionally surprise a fox, egret, badger, heron, rabbit, hare etc. etc. are now well defined with either flattened vegetation or worse, bare and rutted through the passage of countless boots, wearers exercising their right to a daily dose of government sanctioned freedom. The wildlife has adapted, no doubt taking up residence in more inaccessible locations,  my surprises now tend to be floral. True, I have discovered a few new and interesting routes by investigating these emerging  ribbons of erosion created by local residents, who like me are keen to find another way to get from A to B. Today, on a rare, but refreshingly wet, long and lonesome ride I discovered a beautiful, stunning display of Oxeye Daisies, and I had them all to myself! 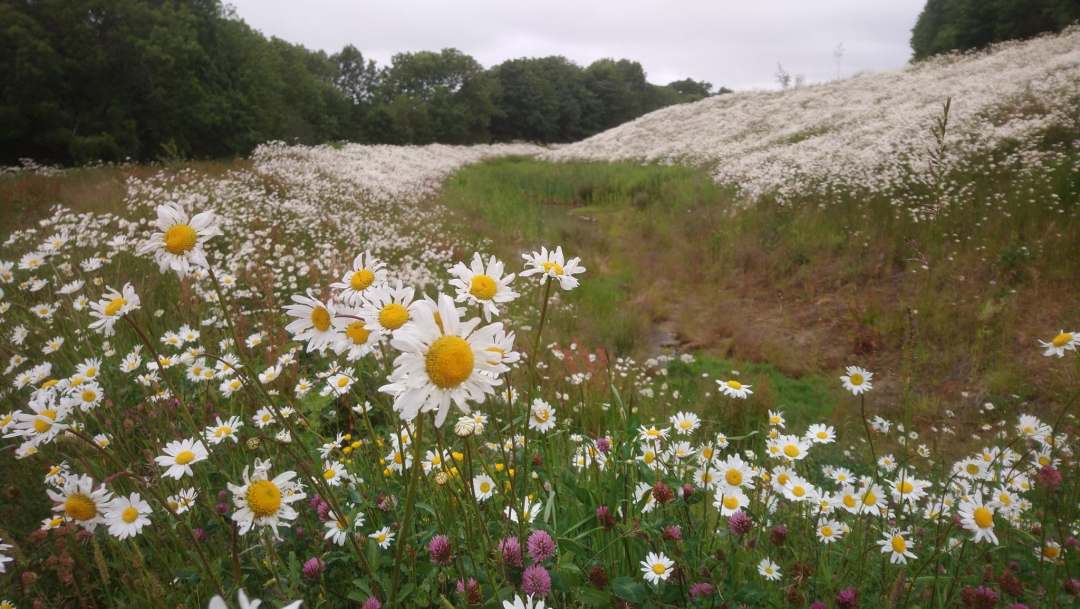 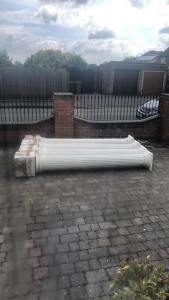 After drying off, and discovering I had  run out of beer and cider (I usually have a can whilst writing this blog), I drove across town to B&M for new supplies. As it was still raining I gambled that the citizens of Harborough wouldn’t want to shop and queue outside today. I walked straight in. As always, when not accompanied by Sue, the trolley got filled up with all sorts of stuff that my spontaneous self whispered I might need. With compulsory wearing of face masks soon to be upon us it was noticeable that none of the staff or, most of the shoppers I saw were wearing them.

Sue spent her day on a jigsaw, sewing the tapestry Doreen had given her to finish and feeding a bedraggled Millie. I dug out an old Tablet that had stopped working and coaxed it back into life, it now has a job in the bedroom as a digital clock display and a useful portal into Google Home.

Lee and Sarah managed to sell the four Roman columns that had adorned their rear garden for £200. Charlotte was pleased, she had campaigned to get rid of them from the very moment she first saw them.  I am surprised they have gone, Sarah loved them so. Though I thought they were too large for their garden, I had got used to them. 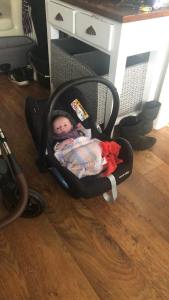 We had an overcast and murky day with rain arriving late in the afternoon.  Sarah and Lee are starting to feel the strain of a new baby, and posted on the Family Messenger, “Advertising childcare duties… will pay. Parents require sleep.” It was accompanied by a photo of a very alert looking Alice in her carrycot. I remember well, the first six weeks with a newborn are tough until the little bundle of poop, puke and pandemonium settles into a routine. At least, unlike puppies, they don’t chew the furniture!

While I was roaming the fields around Harborough on my bike, Sue went shopping to the Fosters Factory shop, returning with a wonderful range of French  fish soups that I can’t wait to try. The ‘other’ Apricot tree ordered as a replacement arrived during lunchtime, all the way from Holland. It looked a poor specimen, heavily pruned down to a stick of a metre long and devoid of any leaves. After unpacking I watered it and left it in the pot in a sheltered spot next to the greenhouse to see if there is still life within. I may move it into the greenhouse in a day or so.

We are growing concerned about our three pheasants. Despite putting out grain we have neither heard nor seen them for two days, fingers crossed the fox hasn’t made a meal of them. Concerning avian matters, we are experiencing another spate of birds attempting suicide by flying into the lounge window. Over the years it has been a regular occurrence on all the windows about the house and it is not unusual to hear the occasional thump on glass as we go about our housekeeping duties. But this week we have had five strikes alone in the lounge, each one leaving large wax like images of the bird in flight. Fascinating to see but perplexing as to why it happens.

During the evening we watched a the film: The Red-sea Diving Resort. It is loosely based on the events of Operation Moses and Operation Joshua (jointly referred to as Operation Brothers), in which Ethiopian Jews were covertly moved from refugee camps in Sudan to Israel during the 1980’s. At times the the plot lacked continuity but it was well acted and worth an evening’s viewing. Half way through the film, Jamie popped by briefly, to pick up a present for Alice that we had been looking after, he will deliver it tomorrow.

13/06/20 Government figures show another 181 people with corona-virus have died, bringing the official tally of UK deaths to 41,662. Hundreds of people descended on central London today as part of anti-racism and counter-demonstration protests , amid pleas from officials to stay at home to stop the spread of Covid-19. The British drug-maker AstraZeneca Plc said on Saturday it signed a contract with European governments to supply the region with its potential vaccine against the corona-virus. The contract is for up to 400 million doses of the vaccine, developed by the University of Oxford, the company said, adding that it was looking to expand manufacturing of the vaccine, which it said it would provide for no profit during the pandemic. Deliveries will start by the end of 2020.

Today, people living alone in England can today start to form “support bubbles” with other households. It paves the way for some grandparents to visit and hug their grandchildren again, while couples not living together will again be able to stay overnight at each others’ homes.

It was a warm and pleasant day in Harborough. As is now usual on dry days, I spend my time in the fruit and vegetable plots and Sue in the garden sprucing up things that have become unkempt since they were last tidied! Today she also blitzed the driveway of weeds and it seemed, turned a lot of the stones in the gravel the right way up 🙂  It is obvious that the easing of lock-down restrictions have begun, there is much more motor traffic  and there seems an endless stream of passing pedestrians at the end of the drive.

Sarah, Lee, Alice and Mia went support bubbling. First they visited Jamie, who this weekend was nearby with Ruth in Bottesford, they then went onto Lee’s parents in Cotgrave where Alice also met her new Aunty Sam White. Tomorrow, Sue and I shall be forming yet another bubble and travelling up to Newbold Verdon to see our grand child for the first time in the flesh. Fingers crossed the weather remains good.

Good news about our pheasants. The two males were seen by Sue, they were  waiting impatiently for her to stop stone turning on the driveway, so that they could feed on the grain, left under the Scots Pine by the lounge window. Soon after I spotted a very proud and protective mother pheasant with a large brood of chicks marching along the river bank. My task next week is to take some family pheasant photos.