31/05/20 The corona-virus death toll in the UK increased by 113 on Sunday, taking the total number of confirmed deaths to 38,489. Deaths  in Italy climbed by 75 on Sunday, against 111 the day before. The total death toll since the outbreak came to light on Feb. 21 now stands at 33,415 the third highest in the world after those of the United States and Britain. Protests against police brutality following the death of George Floyd have drawn large gatherings in dozens of major cities across the United States and even in places like London and Berlin. The development has many  fearing a new spike in corona-virus cases. Ironically, protestation of the wrongful death of one man by illegally congregating in large numbers, WILL lead to the deaths of at least a few more people in around two weeks or so. Would those deaths be unlawful and who would be culpable? 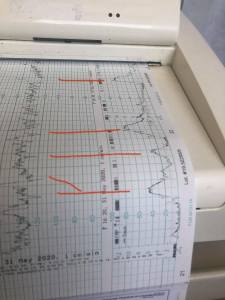 This morning at 8am, Sarah and Lee drove to the hospital. Prior to entry onto the maternity ward Sarah had to have a Corvid-19 test and was isolated in a private room until the result of the test was known. Lee stayed with her she was moved onto the Corvid ward. As of present she is hooked up to a machine monitoring the baby’s heartbeat and her contractions, the results of her test have not yet come back. There is only one other patient in the unit and Sarah is getting rather bored (she says). She will transfer to the delivery suite when the results come back, or the baby decides otherwise.

Here in Harborough it was another dry, fine day. Mia and I started the day at the crack of dawn watering every plant and tree I have and then went for a play in the park with ‘squeaky ball’, she loves to fetch it, making it squeal all the way back to me.

Late morning Charlotte, Suraj, Lucas, Ellis and Harry turned up to borrow the canoe.  As before with Jamie,  I helped them launch it into the canal. From their photos on Facebook they seemed to have had a great time. When they returned, they stopped a while and chatted in the garden with Sue and I.

Jamie turned up late in the afternoon in his Audi R8 as I returned from a walk with Mia. He had driven down from Bottesford and wanted some fresh vegetables for Maddie. He stayed only long enough to gather the greenstuff and then left.

As of 9.21pm this evening (31/5) Sarah is still waiting on the ward and the baby doesn’t appear to be in too much of a hurry.