It’s just a few days since I published the last blog, but I think in the present circumstances that it is befitting that I note down at more frequent intervals the events and details of the enforced changes in the way the Palmer family attempt to adapt to our new and more vulnerable world.

On Friday the 20th March schools shut their doors to children, pubs and restaurants were ordered to close and venues and events that attracted large numbers of participants were stopped. Already the country had been told to work from home (if possible) and the old and infirm are to self isolate in their own homes. The chancellor introduced a whole raft of legislation to aid the implementation of these and backed it up with a colossal amount of money. Only time will tell whether these initiatives  work in slowing down the pandemic, protect our precious NHS and save lives.

We are not alone in implementing these strategies, most of those countries that have already been infected are treading the same path that we have chosen and no doubt those that have yet to be affected will no doubt shadow the same tactics. Do we have a better alternative when in uncharted territory?  When this is all history, the post-mortem will  provide a solution, let’s hope that our ‘experts’ haven’t got it too far wrong.

It’s not the time for recriminations, that may come later, but for now we have to ‘bat’ for  team Earth and give it 100%, because any less will not be good enough.

As a family, we text, call and message each other constantly throughout the day, keeping each other up to date as to what we are getting up to. There have been a few brief visits, mostly to borrow, return or leave a variety of items that are needed by those family members not in isolation, we don’t come too close or stay too long.

On Saturday the 21st, during the evening Sue and I were in the lounge, watching a Netflix film on the cinema system, munching Bombay Mix and sipping refreshments, pretending we were in the Pullman seats at the Odeon, when Messenger began to urgently ping on both our mobiles. That could only mean that it was the family group in conversation. Lee and Sarah were on their way to Hinckley Hospital. Lee suffers from asthma, he had developed a cough and was feeling quite unwell, having rung 111 (NHS helpline) during the morning to seek advice they rang again at lunchtime and were told that a doctor would contact them. This happened at 5pm and were told to go to the hospital. They were met outside the hospital entrance by two fully environmentally suited medics. Thankfully, after further investigation the upshot was that it wasn’t Corona Virus. Relieved (but feeling poorly) they returned home much later that night.

Today was Mother’s Day. The Prime Minister had asked that families did not meet up and create an opportunity for infection to spread. Sue was being treated to a meal by Charlotte, Jamie and Sarah, but as the restaurants were closed, this was going to have to be moved to later in the year. A small sacrifice.

This afternoon I telephoned an old friend Roger Woolnough. He had arrived back from his winter break in Cyprus on Friday. He had to cut short his stay as all Cypriot hotels had been ordered to shut by the government. Luckily, he managed to get a seat on the last flight out of Larnaca to Heathrow at a cost of £611. He described that the island was in panic. Apparently, before Christmas a rich Chinese woman who lives on the island had bought up all the medical face masks and other equipment and sent it to China to help the medical services there in the early stages of the pandemic. They only have themselves to blame.

The weather has been quite good over the last few days, very sunny but with a cold chilly wind. The roads are very quiet, though Welland Park has been fairly busy with families and children, plus the usual dog walkers. The town has a feel about it that we haven’t experienced since 30 or more years ago. The place was much smaller then and when walking around the town, though we didn’t know everybody personally, we shared a certain familiarity because we recognised them as townies. It is like that, but the familiarity is borne from sharing the same worry and adherence to the new rules of engagement. But it seems fragile. All conversations start with, “How are you?” An opening that searches for more than an obligatory pleasantry! I do not know what I would do if the reply was, “I have this awful cough and temperature.” 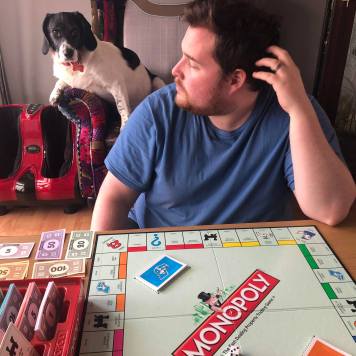 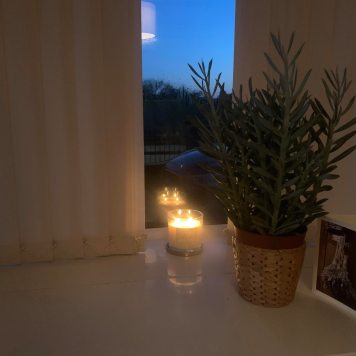 A selection of messenger photos shared since the last blog.

1. Chicken feeder I made for Charlotte’s hens. 2. Lee losing at Monopoly 3. Hinckley hospital entrance. 4. Sue’s card. 5. Harry and boys enjoying the sun. 6. Sunday 7pm window candle to remember those affected by the virus. 7. Mia in water. 8. Geocache found. 9. Ellis and his water balloons.