On the 8th of  September apart from Jamie, we all went to Lubenham to see their scarecrows. It was a scorcher of a day,  fooled by the previous few days weather we didn’t dress appropriately. I particularly suffered through a lack of head cover. The boys loved seeing all the extremely imaginative Scarecrows, they were particularly impressed with the exhibit that gave free toys out to children (I think it was to persuade us to vote for their scarecrow in the Village Competition). We had burgers and drinks in a marquee while sheltering from the furnace that was cooking my bonce (burgers seemed appropriate). There was a fair on the Green and the boys had a couple of rides, the grown-ups busied themselves looking at the various stalls, talking about buying the pretty things that were on sale, but I don’t think anyone did. We had seen everything that was to be seen by 2.30pm and we went back to Willow Bank, feeling a little cooked.

As we got back I got a phone call from Jim, and I cycled over to the Rugby Club and met him to watch the Colts beat Lutterworth (I changed into shorts and took my hat!)

On Monday Nan and I were going up to Yorkshire to check to finish off the work I was doing on the house and again she decided she didn’t want to go, so I travelled up alone. This time I took a working Freeview box, so I had some entertainment during the evenings after I had finished for the day. On the Thursday I had an experience similar to that of those that had been in the Twin Towers on 9/11. I was moving the shed further up the garden to create a parking space. I had knocked out the front and back walls and was chiseling out a stubborn screw on one of the side walls when the whole thing tilted side ways. Realising I was going to be trapped and the post I had braced the walls with, had slipped, I made a dive for the rapidly narrowing escape route  to be thwarted by the step-ladder that tipped over at the wrong moment. Bouncing off the ladder I hit the floor to be miraculously covered by the apex of the roof. I was trapped inside it! I manged to brace myself against the underside of the roof and pushed it to one side and then crawled out of the gap I had made. Despite a gash on the top of my head (bouncing off the ladder) and a painful wrist that I must have landed on, I think I was very lucky.

I drove back to Harborough on the Friday after having the house valued by a couple of local Estate Agents.

Sarah’s car got MOT’d, Taxed and insured and her first journey was to see her sister in Rothwell. A few days later she drove up to Lee’s to stay for a few days.  She and Charlotte had an evening at the cocktail bar bin Rothwell to celebrate Sarah passing her test, by the look of Facebook it looked quite a hectic and long evening, I believe they suffered for it the following morning. I played Suraj again at golf, and honour was regained, though I discovered that my golf clubs don’t fit in the boot of a Fiesta, hmm.

Last Sunday saw Nan and I drive up to Yorkshire with Sarah following, she was starting Uni’ on Tuesday and was moving into her room in the house she has rented with 5 other friends. We left after lunch and were soon there. After lugging around a tonne of clothes up the stairs to her room, I took Nan to Prior Bank as she was  chastising the other students about the state of their Kitchen and the untidiness of the garden, it didn’t seem to be going down too well.

Priory Bank was the Care home that we thought Aunt Edna was in, but when we got there the staff were completely new and after inquiring where she was ,m we foud out that the staff were all agency staff and were a little evasive as to explaining where the resident staff were. Something has obviously gone on. Edna was not there, and no one knew where, other than after half an hour of interrogating her notes we found she had been taken to hospital, but no indication as to which one.  A phone call to the Northern General showed she was not there but at the Hallamshire, which was lucky as that was only a mile away. We found her there in the ”Stroke Ward’. She didn’t look to bad but part of her face was frozen and she had some difficulty sayingcertain words.  But, she recognised us and wanted to know where she was. She had been there for a couple of days. After chatting to the nurse I found out that she was still having tests, but she was improving quickly from when she first arrived. We stayed around an hour and then left for Thurcroft as it wasn’t visiting time and the nurses were getting a bit shirty.

That evening we had Quiche and coleslaw for supper, watched golf on the TV and then went to bed. It was a cold night. The following morning Nan picked the runner beans from the garden and then I pulled up the plants and put them on the compost heap. I took Her around to Nicky’s  for coffee and a chat. We had a surprise when we got there as she announced she was pregnant and having a baby boy (she kept that quiet). I left her there and drove around the streets of Thurcroft, knocking on the doors of houses that displayed the ‘Fore Sale’ sign of the two agents that had valued the house. I wanted to know how they felt about having them as an agent.  Typically, it being Yorkshire, within a few minutes of conversation both parties knew each other’s lineage back to the Ark and I was instructed to remember their dad, mum, aunt, uncle , friend etc. to Nan. After satisfying myself which I should choose I picked Nan up and we drove to Whiston where we met Sarah and had a pub lunch.

On return to Thurcroft, I visited the Estate agent and put the house on the market. I loaded up the car with a few things from the shed and then after a brief stop off at some friend’s of Nan’s we set off back to Leicestershire.

That evening Sue informed me she was going to the Sugar Loaf. Disappointingly she rejected my offer to accompany her for a drink as she was going to see if a pair of sunglasses were there. They had been lost by Charlotte the previous Sunday, when they had lunch there. At £140 for a pair of Prada glasses, that seemed quite an expensive meal, and ridiculous for a pair of sunglasses. Luckily, Sue the ferret badgered them into looking for them, and they were discovered at the back along with another pair (which we seem to have acquired as well).

Over the weekend Jamie and  a friend worked on Jamie’s car. Unbelievably they raised the suspension.  Apparently, it was too bumpy a ride before, I wonder if he is developing piles?  At least the road humps in Harborough can rest a little easier.

Now that the allotments are producing fruit and veg in abundance, the grapes have decided to join in. We have been scoffing the red variety for just over a week, and though not big (more like large black currants), they do taste quite nice and are very moreish. With around 10 bunches per vine there is plenty to keep us going. The white grapes are even better, they are much bigger and even more plentiful, but disappointingly not ripe yet, and are still hard. We need more sun! 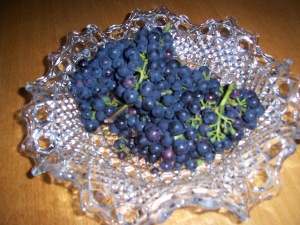 Sue and I went to see  ‘Salmon Fishing in the Yemen’ at the Harborough theatre. A very entertaining film, well worth watching.

Yesterday, Nan and I went to ‘The Waterfront’ for lunch, the meal was very impressive and it was nice to look out over the canal (where we used to live).  Sue went out with Lynne Keane (Charlotte’s childminder) to Emerson & Wests.