It was two days ago that Charlotte, Suraj and Lucas travelled to see us, it took them over an hour by minibus, the roads are not great here, mostly dusty affairs with many police checks to delay any journey. It was lovely to see them and as it was Charlotte’s birthday, she had cards and presents to open. The staff at our hotel were just as excited as us to see them, so they had to do a round of introductions to all on duty that day before we could show them our hotel grounds and rooms.

After the introductions and tour, we went by taxi into Stone Town to show them the sights. We haunted the gift shops and art galleries before having lunch in 19th-century century European explorer David Livingstone’s house. It is called his house, but it was originally the British Consulate, his body was brought there and stored (after he had died) before being shipped back to England. It is now a very pretty bar, with pretty views overlooking the sea. Whilst shopping, we had an unpleasant incident when a local hawker became too ‘pushy’ with Suraj, it wasn’t until after a bit of pushing and sharp words, he eventually left us alone. We left the market situated within the fort with several paintings purchased. They left us around 4.30pm to return to their hotel in Nungwi.

The following day was Charlotte’s and Suraj’s wedding. After breakfast, Sue and Sarah went in a pre-booked minibus to Nungwi. Sarah was so excited about the wedding that she didn’t go with us for the previous evening’s meal in Stone Town, preferring to wash her hair and get everything ready. Sue and Sarah went to help Charlotte get ready, they were also having a special wedding day Spa and massage. Charlotte had also arranged for her own and Sue and Sarah’s hair to be styled.

Jamie and I (men) didn’t travel with them as protocol dictated, we were not allowed to enter the hotel (Gema del Est) until after 4pm. And it is also why Suraj and Lucas had to travel to our hotel on the return taxi, he wasn’t allowed to see Charlotte until the start of the ceremony, so it seemed best they meet up with us and we travel north together. When they arrived, we wasted time walking along the beach to a nice bar and having lunch. In a bit of a panic, we had to race the incoming tide on the way back, or else things might have been very different to those planned (though Sue and I weren’t sure what HAD been planned). After showering and changing into our glad rags we got the taxi at 2.30pm and travelled north. Disappointingly, it rained on the way, but thankfully it had stopped by the time we arrived, and the sun came out!

Uniquely, the staff drove us by golf cart to where Suraj and Charlotte had their rooms. On the way I had to agree the hotel is in a beautiful location set on a stunning white beach, I am not surprised it deserves its 5-star rating.  It is the largest and grandest hotel on the island and has won a prestigious international award for exceptional service and facilities. 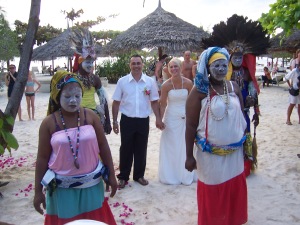 Jamie, Lucas and I were taken to where the girls were staying, and Suraj had to remain in his own rooms. I have two very pretty daughters, but today they looked absolutely stunning. Several weeks ago, from the photographs that were taken at the time I had made a video of my own wedding, today, looking at the women in my family reminded me of how gobsmacking beautiful Sue had been on that day (and still is). Neither Suraj nor I had seen the girl’s dresses before now, we agreed they were a perfect choice. Having paid for them to be designed and made, even the Yorkshireman in me had to agree (reluctantly) they were worth it.

Eventually, dressed and smelling sweet, Jamie, Suraj, Lucas and Sue were whisked away in more golf carts. I took a few photos of Charlotte and Sarah before we too were transported to the starting point next to a beach full of interested holidaymakers.

What happened next was truly amazing and other than the birth of my children, it was the proudest moment of my life as a father, to give my eldest daughter away in such a fashion. The following description cannot do justice to the sight, sounds and emotion that greeted Charlotte, Sarah and I on that walk to the altar. We began stepping down a series of steps strewn with red petals, accompanied by two Massai Chieftains. As we paused awhile at the bottom, it seemed as if everyone on the island was taking photos and applauding. Thankfully, we were each presented with a glass of champagne, someone knew our throats would be very dry at that moment. Sandpaper gullet washed away, we were invited to carry on by another Massai warrior who scattered yet 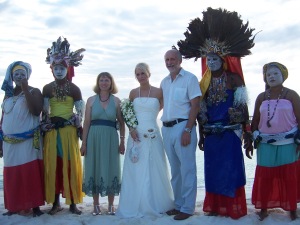 more petals across a walkway of plaited palm leaves (thoughtfully placed to prevent Charlotte’s train from dragging in the sand) and laid over the pristine white silica. What followed was a winding and lengthy trail beneath several flowered arches to the constant flash of cameras and the clapping from guests and hotel staff (who had been given time off to attend). We eventually reached our destination (seemed forever), and I handed Charlotte over to a waiting Suraj (he looked very relieved). Through moist eyes, I could see he was surrounded by

twelve Massai warriors and to the side, a band of Massai drummers banging the life out of their instruments in a hypnotic rhythm.

As I stood back to watch the ceremony, Charlotte and Suraj began to take their vows, giving me a chance to take photos and to take in just how many people were there. There was complete silence as the priest and betrothed gave their vows, no one seemed to want to miss a single word.  Sue and I were beckoned forward to sign as witnesses and the priest motioned Suraj to kiss Charlotte, at this the crowd erupted in applause!

As the cheers subsided, Suraj left Charlotte’s side and in front of a hushed and confused audience, he brought out a small wooden camel and presented it to me. Only the family knew its significance and it was a wonderful and memorable gesture. Years ago, when Charlotte was just a little girl, I had playfully bartered for her with an Arab in a souk in Egypt, for several camels. He had admired her blonde hair and wished his daughters had the same. At the time I thought it was a bit of fun, but to my young Charlotte, unknown to me it had been the cause of many a nightmare.

The married couple left the beach along the plaited walkway which now had traditionally dressed warriors dancing and chanting alongside an even louder banging of their war drums. Reaching the

end of the walkway, the proceedings seemed to dramatically change and follow that of a traditional Masai wedding.  The couple stood facing the warriors arranged in a semi-circle as they leapt, danced and sang traditional songs, at times (to European eyes) there appeared to be threats. It was very loud and spectacularly colourful. When the proceedings calmed down, formal photographs incorporating absolutely everyone present took place. Eventually, in the obligatory golf carts, we were transported back to the rooms the now-married couple had been staying in. 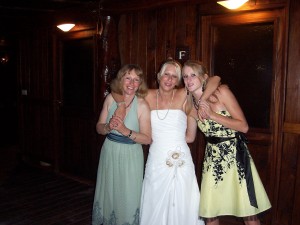 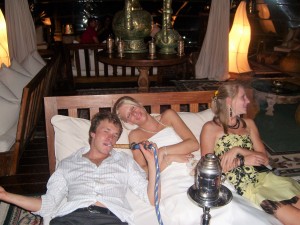 Here again, was a surprise. The sight greeting us on entry was stunning, every surface was scattered with red flowers and petals, and Jambo was written in petals on every flat surface including the beds. And. to our amusement, the toilet pan was also given the same treatment!  Even more champagne was available, and food and fruit were laid out neatly on a table. How the staff managed to transform the rooms while the ceremony took place and witness the wedding seems quite unbelievable.

Later, still high with emotion but considerably merrier through the influence of alcohol, we travelled back in the now-usual vehicles to the beach for the wedding meal. The sun had now begun to set, and a warm, golden glow was slowly marching across the heavens. The beach was empty of guests, we only had the 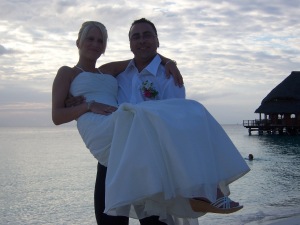 swish of the sea lapping near a heavily laden table and chairs, beautifully decorated with more flowers and plants. It was superb, it was so romantic. As candles were lit, the sun dipped below the sea and the stars came out to celebrate my daughter’s wedding. There was champagne, malibu and coke, and soon seven very merry revellers.  The food was served by a pair of smartly dressed, uniformed staff until a (very creamy) wedding cake appeared, and we were left to ourselves. With cake sliced and devoured, under a spangled firmament, we made sandcastles, played tag and attempted cartwheels, it was all too much for tired little Lucas and he quietly dropped off to sleep in his pushchair. He missed the African band playing a mean Santana set and he slept on as Suraj and Jamie found a

Hubbly Bubbly pot and relaxing on cushions in the beach bar, drifted off to some distant ethereal plane.  All too soon, it was time for those of us whose accommodation was in the south of this beautiful island, to depart.

We left around 1 am, arriving back to a dark and silent hotel around 2.30am. I attempted to sleep, but couldn’t, I wanted to remember every single moment, recalling the sights, sounds and emotions of the day in the darkness of the room.  I got out of bed at 6,30am and began to write.

It has been such a perfect day. Thank you, Charlotte, Suraj and little Lucas.