19/05/20 An additional 545 people have died in the UK after contracting the corona virus over a 24 hour period. This brings the total number of people to have died in all settings after testing positive for the virus to 35,341. The number of deaths to date in and around Harborough has been 16, with just 4 fatalities within the town. My optimism of yesterday seems ill-founded.

On a lighter note, Donald Trump is continuing to defend an unproven corona-virus treatment involving the anti-malaria drug hydroxichloroquine despite studies from within his own government highlighting dangerous potential side effects and disclosed today that he is taking the drug himself. 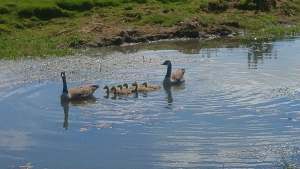 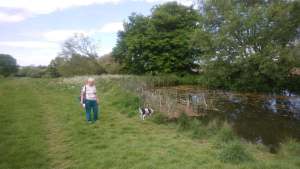 Mid-morning Sue and I drove up to Newbold Verdon to see Sarah, Lee and Mia. On arrival we dropped off some ‘goodies’ on the doorstep, briefly chatted to Sarah standing in the doorway and then clipped a lead onto an excited Mia. While the day was still cool we set off on a planned walk through the local North Leicestershire countryside. Lee was working, engaged on a video conference in his study. Six months ago I had plotted a route on my GPS taking in the local views of the area, but a cruise and then a pandemic got in the way of being able to walk it. 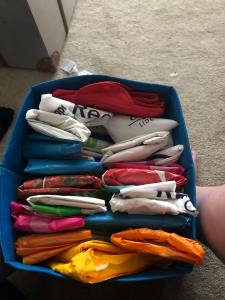 That’s a lot of carrier bags!

We started the hike from the nearby Gothic styled St. James church. The entire route took us exclusively through and around fields emerging from their winter starkness. It was wonderful to walk among hedgerows bursting with fresh buds and blossom, sheep and cattle grazing on vigorous new growth and even some late tadpoles wriggling randomly in a small pond. As if we needed any more evidence that spring was here, in another pool we came across a pair of Canada Geese complete with a new family of goslings. The drake rhythmically bobbing his head in warning at Mia as we passed. She took not notice. Frustratingly we passed by a large field planted with potatoes, popping their heads out from row after row of undulations and in perfect condition, no sign of frost damage! What is going on? My spuds are struggling in south Leicestershire and these are thriving in north Leicestershire! Not fair. We had our sandwiches and chocolate bar in the corner of a field. I sat on a stile, Sue sitting on a light picnic rug I had carried in my rucksack, Mia nosing between the two of us, hoping for a scrap or two. Successfully pressuring Sue for a bit of a sandwich, she had to make do with one of her own treats from me. The heat had built up for our final leg back to Newbold and a heavily panting Mia struggled, she was glad to get back home and shade.

Keeping our distance we sat in the back garden and chatted with Sarah. It’s not long now before the birth and we could see that movement is getting quite difficult and best not attempted unless absolutely necessary. While we had been walking Mia, Sarah had spent her time folding plastic carrier bags into neat little triangles (to save space), 61 in total. Lee came down for a chat and I think to refresh his thoughts. Working from home is convenient, but it does mean that you are available 24/7. We left knowing that we shall be returning, possibly next week, perhaps even sooner?

During the late afternoon I set about repairing the large wall clock that sits on the outside of the sun-lounge, it got heavily warped last winter and stopped working. I cut out a dial from a poly-carbonate sheet ant fitted it into the clock frame. I ordered a clock mechanism and some stick-on roman numerals off the internet, I will assemble it when they arrive.

Jamie has decided to age a large piece of steak. He has covered it in butter and hung it in a dark cupboard for 21 days. And I thought that life was dangerous enough with a rampant corona-virus without salmonella being given an opportunity too! Today, Ellis made Sue a painted pebble, which was appropriate as Sue also found a painted pebble on our walk, she placed it among the stones around Sarah’s pond.

Captain Sir Tom Moore said he was “overawed” to learn that he will be knighted after raising almost £33 million for the NHS by walking laps of his garden. I think the prime minister hit the nail on the head when he said, ” Sir Tom provided us all with a beacon of light through the fog of corona-virus”. A well deserved award and I hope a fore-runner for a plethora of equally deserving accolades for those on the front-line against corona-virus. Our archaic honour system for once has a justified purpose, it is long overdue that ‘gongs for the boys’ is eradicated from the system and is used exclusively for earned and warranted reasons. If there is any doubt, I am in the phone book. 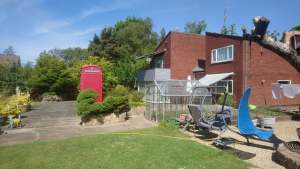 On the hottest day of the year so far (28c) pictures of residents and tourists flocking to beaches in Southend, Bournemouth, Margate and Brighton sparked a backlash, with one man saying: ‘It’s madness, it’s like everyone’s forgotten about corona-virus.’ Therefore, it wasn’t a surprise when I read the headline, ‘There were no new corona-virus infections recorded in London in a 24 hour period‘, obviously there was no left one in the capital, they were all on the beach!

What do you do in a pandemic on a hot day? Well, I watered the vegetables, mixed some mortar and cemented the loose rocks in the raised flower bed together, before unwinding the awnings above the patio and balcony. I then retired for the day onto the balcony with some very cold cans of Newcastle Brown and listened to the radio. My view to the south of the county was totally devoid of any activity, except for one passing aircraft (don’t see many of those now) and a very brave/stupid crow attacking two Red Kites as they circled overhead. A little later I witnessed a small angry sparrow flying after a much larger magpie, seemingly desperate to get in a good peck! Has there been an out break of avian madness in Leicestershire, or perhaps they are zombie birds? 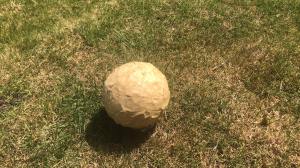 Sue spent some of the morning tidying up around the garden, before escaping the oppressive heat by laying down in the study (coolest room in the house). Later, she manged to raise enough energy to begin her fourth jigsaw. Lock-down must finish soon as she has now run out of jigsaws!

Besides being pregnant and melting in the heat, Sarah (for some reason?) made a wasps nest and watched it dry. She is selling the succulents she raised in the green house, on a table at the front of the house for 50p each. Today she received a lovely note from an unknown neighbour for one transaction. After finishing her gardening work for the day Charlotte cooled down with an ice lolly and watched her strawberries grow. Jamie had a BBQ in the evening. 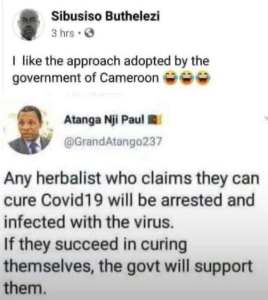 21/05/20 The number of Covid-19 patients to die in the UK is has passed 36,000 after a further 338 fatalities were reported. Of these, 233 happened in hospitals, with the overall number of deaths now reaching 36,042. Data shows, that Sweden, which has kept schools, bars, restaurants and shops open throughout the corona-virus crisis, has become the country with the highest number of Covid-19 deaths in the world per capita over the last week. Perhaps there is a lesson to be learned here? 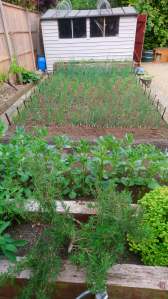 Like many, I find it difficult to ignore the President of the USA, I am not one of his unfortunate citizens and yet his very existence seems to increasingly enrage me. Today, on leaving for Michigan he was asked by the media how he was feeling, he replied, “I tested very positively in another sense. I tested positively toward negative. I tested perfectly this morning, meaning I tested negative.” Any idea what he meant? Such clear thinking and articulate oratory obviously makes him a shoe-in for leader of the free world! (irony)

Another hot and sunny day in south Leicestershire. A long morning cycle ride took me through land once occupied by RAF Market Harborough, a WWII airfield from which Wellington bombers and Hurricane fighters flew. After decommissioning it was used as a Polish Camp for housing displaced Polish families, some of which were were still living there in 1958. Now it houses Gartree Prison (I once worked there), the Leicestershire County Showground and a growing new housing estate. None of the war time buildings remain but the concrete aprons for the bombers are still there and it was along one of these that I explored. To my surprise I came across a gentleman flying his model aircraft, how appropriate is that? He was very adept, I stood for quite awhile leaning on my bicycle watching his machine perform loops and dives, turns and twists, sometimes even upside down. When his craft came to earth in a smooth landing I engaged him in conversation. Though there was no evidence of it, he professed to being a bit rusty, naturally he hadn’t flown anything since Christmas. He told me that the small patch of grass used as a runway was going to be ploughed over soon, however, the farmer was providing the club that he belonged to with another landing slip not too far away. How kind I thought, yet I did like the idea that aircraft were still flying out of RAF Market Harborough, even if they are quite a lot smaller than the real thing. I left him to his play and continued along the concrete track-way convinced I could faintly hear the steady throb of twin-engine Vickers Wellington revving up behind me?

Sue spent the afternoon gathering leaves and garden debris and I cut back the top of the ivy along the garage and the side of the house. I would have liked to taken off the thick frontal growth but there are several nests in residence with occupants at the moment who I don’t want to disturb. As is the case on a Thursday, at 8pm, with the rest of the neighbours we went to the end of the drive and clapped to show support for the NHS and other Carers. This evening we stayed a little longer to watch a convoy of trucks, tractors and all sorts of commercial vehicles, decked out with flags and with lights flashing and horns blaring, pass by. A very patriotic and British exhibition of coming together. 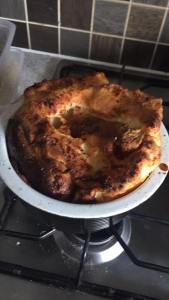 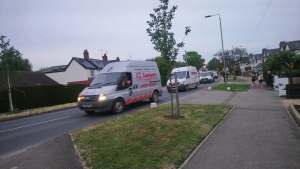 Yesterday, Sarah had a visit from Abbey Rogers, her Sheffield University friend. They sat and chatted in the garden for a few hours before Abbey set off on the long drive back to Yorkshire. Jamie took his R8 out for a Costa Coffee drive-thru. I think Ruth made toad in the hole or a possible vaccine for Covid-19, but from the photo it isn’t clear.