On the 11th Feb we passed the International Date Line and magically the 12th disappeared in a flash to be instantly replaced by the 13th, tough luck on those that had a birthday or other celebration I thought, but we did celebrate Valentines Day as recompense the following day. All the activities and meals had the theme of love somewhere buried within them, but there were few other outward exhibitions of romance by our fellow passengers, though I did watch a few fellow males look briefly at the heart shaped boxes of chocolates for sale, before hurrying on to what ever diversion was more important.

Worthy of mention was a production of the ‘Phantom of the Opera’, absolutely fabulous and though reduced down to just an hour, it kept faithful to the plot. Unbelievable vocals and brilliantly acted, not surprisingly the cast received a standing ovation. The memory will last for a long time.

Life on board ship

I had decided at the beginning of this cruise that I wouldn’t comment on what we, the crew and passengers got up to each day, other than the unusual and perhaps the odd incident worthy of comment, otherwise this blog would soon become tedious to write and even more so to read, not forgetting it is the destinations which provide the experiences that are interesting. These blog pages were created to inform family members of what each of us got up to, principally as a diary of the Palmer’s activities, to be read in our dotage as a reminder, when memories grow dim and we become even more sedantry. However, with so many sea days behind us and more to come I shall fill some spare sea time into describing life on ‘our’ Columbus.

In an enclosed environment, where a large group of people are in close proximity to each other it is inevitable that bugs will easily pass between individuals, despite the crew constantly squirting antibiotic gel onto outstretched hands, gel dispensers being available everywhere, constant reminders to wash hands, all surfaces and hand rails being regularly wiped over with strong and pungent chemicals, if every individual doesn’t play ball and be equally scrupulous with hygiene, then infection is going to spread. The ship suffers from what has been termed the ‘Columbus cough’. As this is a world cruise, bugs have the opportunity to really exploit the situation as the length of time to find a foothold is that much greater. As in cruises of 7 or 14 days, bugs are not being disembarked to home ports, but at every port we spend some dollars in. As hosts we do a very good job of permitting bugs to jump ship and no doubt wreke havoc on unsuspecting natives. Wasn’t it the first Spanish ‘cruise galleon’ captained by Cortez that saw off the Mayan with European diseases?

Every where we go, we hear the detonations of sneezes, coughs and the the rasping of noses into tissue (if lucky), very few, if any, have been spared the ‘Columbus cough’. Sue and I are presently getting over our second bout of annoying runny noses and tickly throat. We have been touched very lightly by this malady but others have not been so fortunate. As with germs, rumours spread rapidly, and as with ‘Chinese whispers’ it is impossible to say what we hear is true. The ship’s hospital IS full, that we know from people who have been interred in it for a few days to recover. Either, 11, 8, 5 or none have died on board through its presence, though my guess is none as there have been no ambulances waiting at the ports that we have called at and the last incidence of canabalism on the Polynesian islands was in the 1916.

The bulk of the passengers are in excess of 50 yrs. of age so it is appropriate that many of the deck and pool activities that happen through the day pander to their tastes and experience. Many of the TV shows of the 60’s and 70’s are re-enacted; Blankety Blank, Mr & Mrs, Call my Bluff, Family Fortunes, etc. etc. But, the most popular (and least active) that take place morning, afternoon, eve and night are the quizzes at various locations around the ship. They are always well attended and hotly contested, I can’t imagine a ship load of 18-30 year olds putting this high on their agenda. Sue and I prefer to play as a pair but, most play in teams of 6 to 12, so we treat it as an important brain stimulant and we try to improve on our previous scores. It is well known (and discussed) that one team of 11 each fill their own sheets in and when the answers are given out, if one of them has the right answer, it is written into their team sheet. Yes, it is team play, but I think that is not quite in the spirit of a team quiz. They win quite a often.

The more active groups include the ship’s choir who have met for daily practice since the start of the cruise and recently gave us a performance of the songs that they had learnt. Likewise, there is an amateur dramatics group who have put on a performance of ‘Snow White’, it was about as amateurish as you could possibly get, but it was tearfully funny because of it. Another group is the large ukelele group, who have also performed for the other passengers and were surprisingly good, it is quite novel seeing a herd of (I don’t now the collective noun), strumming tiny guitars and singing cowboy songs and sea shanties, they do ever so well. 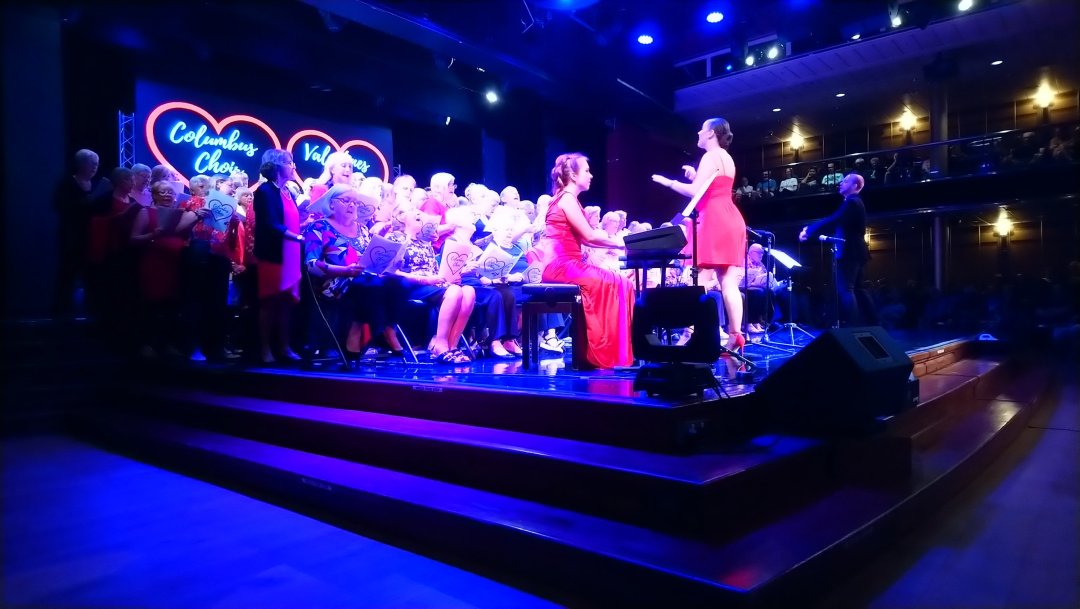 As always there is a large Bridge playing group who meet each day in the dedicated games room, Sue and I on occasions have joined them when it is too hot to play our games of scrabble on the deck. Bridge is not a game we care to learn to play as the members never seem to be enjoying themselves and often make quite scathing comments on those players that don’t seem to be playing well. Besides a dedicated library there is also a popular jigsaw room containing half a dozen on the go at a time to be worked on by anyone who wishes to.

It is our habit to play a game of shuttle board on deck seven in the late afternoon, until the heat and humidity get too much for us, Sue is often seen playing a variety of other games involving throwing or sliding objects into or onto a variety of equipment with what appears to be a dedicated group of players.

Of course I could attempt to divide the passengers into groups: those that spend all day sunbathing, reading, involved in activities, sitting chatting and drinking or continually eating, but apart from sunbathing most seem to dip in and sample all the delights on offer.

Films are shown during the day below decks in the Palladium and at night under the stars on the top deck on a huge screen, sea conditions permitting. There is also a casino, but I believe that it isn’t used much by the present passengers, it may be used better when we pick up more in Australian and New Zealand. There is disco which is used until the wee small hours, and by the look of some of our fellow guests at breakfast it is well patronised.

The crew are from all four corners of the Earth, but there does appear to be a theme among them. Like many, our cabin steward is from Kerala in India and along with the Phillipines they seem to be allocated this job on board. Our table waiter is from Myanmar and surprisingly there are fifteen more of them, but the bulk of the dining staff are also from the Phillipines. Below decks, the engine room and maintenance seems to be comprised mostly of Russians and Ukranians (not sure how that mix works!) with many Eastern Europeans being in the service sector (shops, spa, reception etc.). The chefs are mostly indian and the captain is Greek. The entertainment team and lecturers are mostly made up of British though they don’t appear anywhere else on the ship’s rosta.

On Valentines Day we had a special meal. 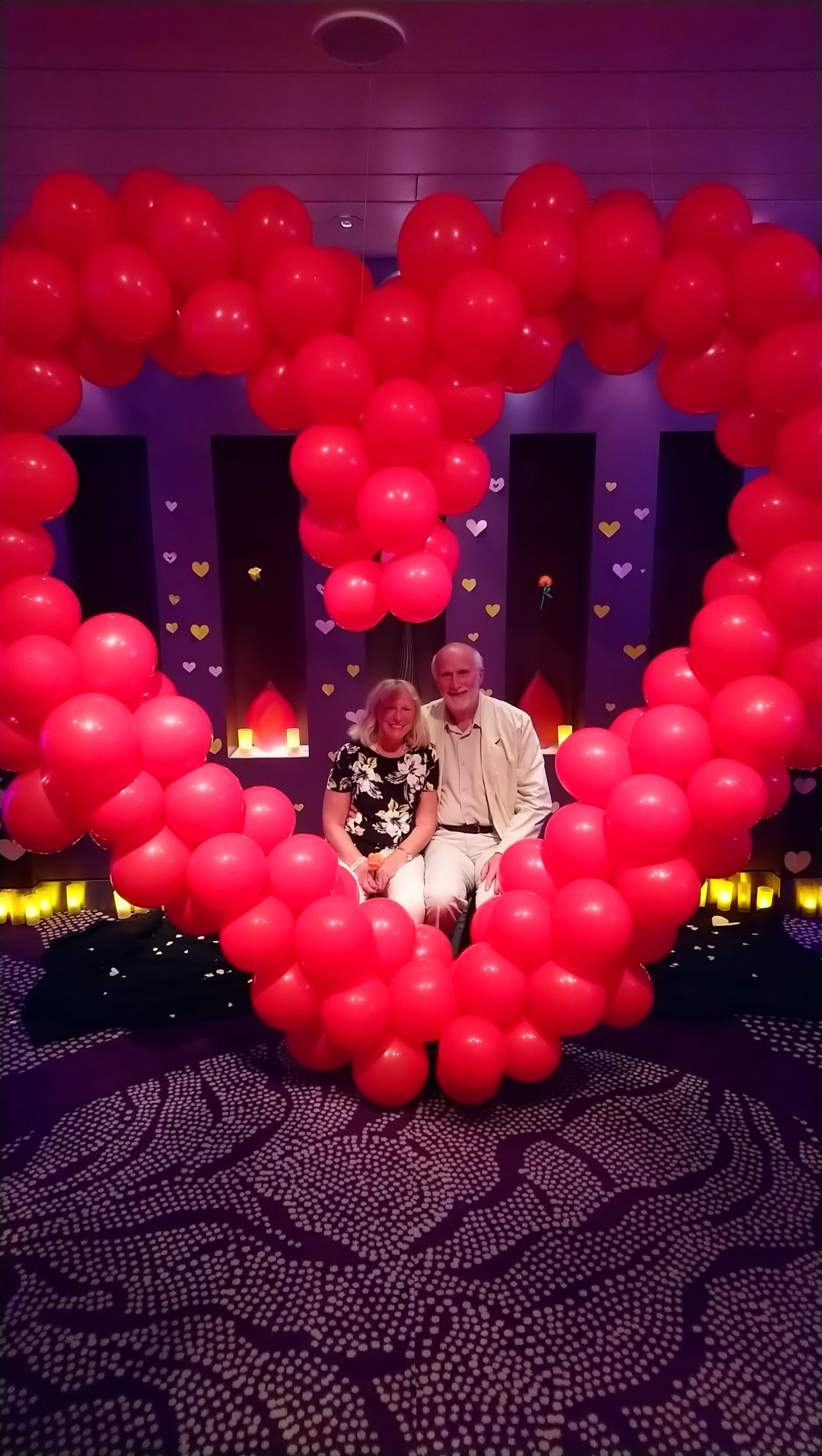