We were out on deck by 6.45am to catch our entry into the Bay of Island and were lucky enough to have timed our emergence from the bowels of the Columbus just in time to catch a glorious sunrise over the islands. It looked like it was going to be a glorious day and that is what it turned out to be.

Breakfasted, we were on the third tender of the morning for a long 20 minute transfer to Waitangi Wharf, located just outside the town of Paihia. We had not opted for a cruise organised trip, but were going to follow our own itinerary. After disembarking from our brightly coloured orange lifeboat/tender left the dock following the well sign posted route along the shore line to the Waitangi Treaty Grounds. Most other passengers boarded free shuttle buses into Paihia with a few fitter ones looking like they were going to walk it, it would take them half an hour.

Our route to the Treaty Grounds took us through the grounds of a hotel that had fabulous views of the bay before arriving at the entrance of our destination. Acknowledging that we were from the ship, we received a discount on the entrance fee and paid $80 for the both of us. We had 30 minutes to wait before our guide was ready to take us around the various exhibits and sights. We spent some of that time in the Maori Museum situated close to the entrance,before meeting up with our Maori guide and other ticket holders (some from the ship).

We first visited Kauri tree as this features heavily in Maori folklore, but this was a relatively young specimen at only 150 years and was nowhere near the girth and height of the ones Jamie and I saw on our road trip to NZ a year ago. Even so, you could appreciate why they regard the tree with such reverence.

We moved on to see several Maori war canoes , the largest of which is 79 years old and takes 80 rowers, but has accommodated 158 individuals on several occasions, including Prince Charles and Lady Diana. It is made in three parts from Kauri wood.

Next we visited the treat ground itself and the delightful, white wooden house that the treat was hastily prepared. The Waitangi Treaty is the most important document in New Zealand, comparable I guess to our Magna Carta in effect. It is when New Zealand was born as a nation in1840 and for once we British did the right thing, respecting Maoris tradition and culture. The document produced was signed by most (but not all) of the North and South island chieftains. The story of the signing is wonderfully told in the museum.

Our tour ended with first a traditional Maori welcome (intimidating), then a powerful performance of their traditional dances (again threatening). In one dance I was surprised to have a had a spear thrust at my throat, it couldn’t have missed by more than a few centimetres. I was thankful for his skill but would prefer it to happen only once in this lifetime.

Before leaving we visited the museum again as this time we understood the significance of the exhibits and artifacts we had passed before. Of course the associated shop was visited and some purchases made. I would recommend that anyone visiting the Bay of Islands area to visit the Waitangi Treaty Grounds, not only is it a fascinating visit with entertainment but it gives you a rare insight into the history, culture and soul of New Zealand.

We returned to the wharf and caught the shuttle bus into Paihia. It is a popular tourist destination township in NZ for Kiwis, there are many small and middle sized hotels, but they are tastefully built and many of the largish homes are B & B’s. It’s a busy little port with frequent ferries over to the small settlement of Russell, which unbelievably was the first capital of the country. It also attracts many cruise ships even though they do have to anchor mid-sound and tender their clients to the small quay. As a consequence the place has tourist shops in abundance along with many restaurants and bars. From the quay you can catch boats that will take you dolphin and whale watching as well as fishing trips and those that visit many of the little islands in the area. You can also take a helicopter ride to see the bay from the air. We caught a twenty minute ferry ride to Russell.

First stop was at a bar in the centre of the settlement for cold refreshments to cool down as the heat of the day had really started to kick in. We moved on through the town passing by many of the tidy white wooden houses, looking like they were plucked from a Victorian postcard towards Long Beach on the other side of the isthmus. Part of our trail took us along a narrow, shady valley path that was punctuated liberally with beautiful blue trumpet like creepers, very pretty.

Arriving at the beach we were discover that quite a few of the Columbus’s crew had taken advantage of some free time and were sunbathing or swimming. A lovely quiet beach, with just a few houses on the hillside for company. We paddled in the surf to cool our feet then sat in the shade and people watched for a while. Returning to Russell we thoroughly investigated this gorgeous little town, so, so pretty, especially on a hot sunny day when the colours of the sea and land stand out so vividly. I really do like this place. 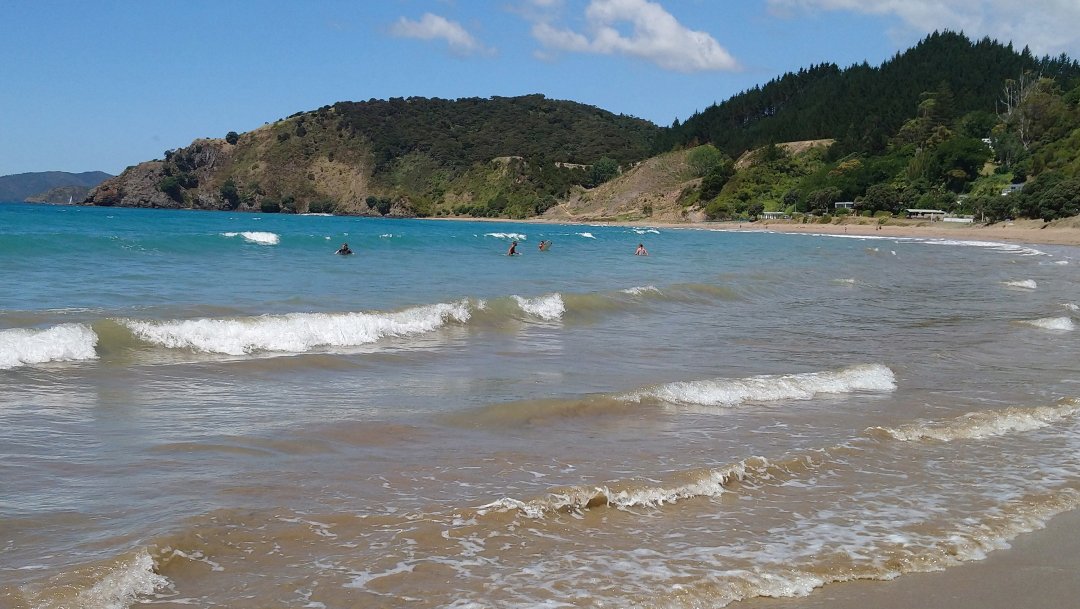 We returned on a slightly faster ferry to Paihia, where after visiting a supermarket for some beer to put in the fridge in our cabin, we perused the local outdoor market then the shops down the main street before catching the shuttle back to Waitangi Wharf. Here a tender was waiting and within twenty minutes we were back on board and heading to the burger bar on deck 12 (shocking!)

After the evening show and meal, I ventured on deck to watch the sunset over the bay, as I saw it rise first thing this morning. Both events were magical. This place really does have a special place in my heart.