On our second sea day we had passed over another time zone so enjoyed another hour in bed, making 11 changes so far, we could see from the comfort of our bed that the bow camera was displaying running water across its lens indicating heavy rain. We have enjoyed excellent sea and weather conditions up till now so I guess it was to be expected sometime. By the time we had emerged from breakfast, the sky had brightened and the rain had disappeared, but up on deck, it felt quite clammy. We made the decision to deviate from our regular timetable of events and play table tennis up on deck 13 in possibly the coolest room on the ship. That was the plan, but we were eventually scuppered by what appears to be an inbred national trait that I am sure has on occasion led to conflict.

We first checked that the room was not being used and then visited reception to pick up the bats and balls necessary to play the game. However, they had been taken, so returning to the table tennis room we expected to discover people starting their game. It was still empty. We waited awhile and eventually returned to reception to be informed that the bats had been picked up at 9am, which was just before we attempted to collect them. After several repeated visits between reception and the room, and phone calls by the staff to the rooms of the miscreants, still no one by had appeared to play. Eventually, at 11.20am we came across the culprits. There were seven of them, four playing doubles and three waiting to play. It was no surprise to seasoned Brits as ourselves, and witnesses to many hotel pools with towels draped over the surrounding empty sun loungers placed there the previous night, that they were German. To be fair, I was surprised that they had branched out into this previously unknown area of spiteful annoyance, but it did not prevent me from providing them with the benefit of what I consider as good sound advice. We left in silence, with the point made. 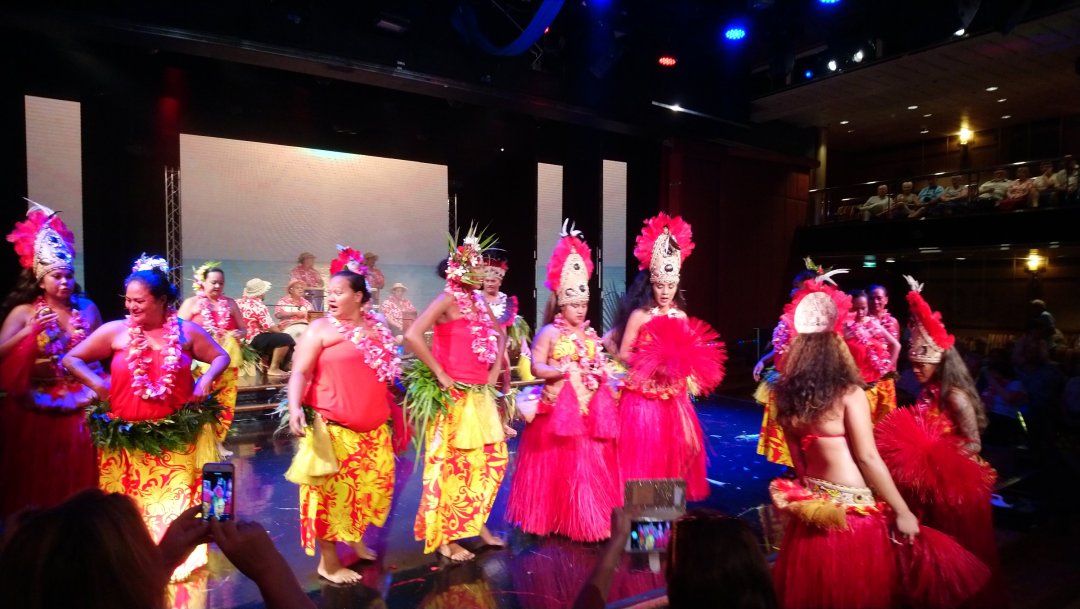 We had noted during the morning news update from the bridge that there seemed a little hesitancy in the weather report and this gave rise to the thought that not all was well. That evening during a formal dinner, we had our meal disturbed by an announcement over the PA system from the captain informing us that there was a storm on our route to Tonga and this would make docking at the port too dangerous. We would be carrying on to New Zealand and calling in at the Bay of Islands as an alternative. It’s a very pretty part of NZ, Jamie and I visited it on our road trip to the North Island. We shall wait and see if there are any excursions organised, or if this is a ‘DIY’ stop.

From the information displayed on our cabin TV, we could see our change of course to avoid the weather system causing problems and it looks like we have quite a few more sea days ahead before NZ. There was a noticeable increase in the swell overnight causing the ship to roll but not enough to cause concern when walking around the decks, pleasingly Sue is not suffering from the usual seasickness of past cruises, she seems to have acquired a pair of sea legs at last. As with missing out on Nuku Hiva it is a disappointment, but as the captain said, our safety is paramount and we can always come back. That Tongan rugby shirt I was hoping to buy will just have to wait, there are greater hardships in life than missing out on a shopping trip!

The sun is out, the sea is blue, the entertainment team are top notch and the food is first class, so what’s to moan about?