What a wonderful day. It began when we opened our blinds and there was the castle of Rhodes resplendent in the sunshine with the Greek flag flying proud.

I had been to Rhodes before, with Nan, Sarah and Jamie. Sue and Charlotte had stayed at home because of the scheduling of the British examination boards. I remember the island with fond memories and was hoping to show Sue some of the sights I had visited in the Old Town.

We had a leisurely breakfast as we were not moving on until the evening.

Disembarking onto a quay that was only a few hundred metres from the castle walls meant that we were soon ambling along between the sea and fortifications. They are so impressive. You can imagine that any potential attacker would have been deterred and hence move on to easier plunder. The multiple layers of defence are practically intact, untouched by time or man.

After negotiating the lower ramparts we struck inwards through the walls via a heavily fortified system of gates that for any aggressor would have meant certain death. The number of huge round stone ‘crushing’ balls lying around was testament to failed past conflicts.

Entering the Old Town we encountered a maze of narrow cobbled roads  festooned with shops and restaurants. Immediately Sue dropped into search mode and started investigating each shop in turn while I sat on a bench beneath the imposing walls and played ‘scratch my ear’ with one of the town cats.  Without Euros no purchase was possible so an ATM was located and the buying spree began. At this point Sue mentioned that we must not under any circumstances let our daughters know what a wonderful place this is for bargains. So I promised to keep quiet and not mention it when we returned home. 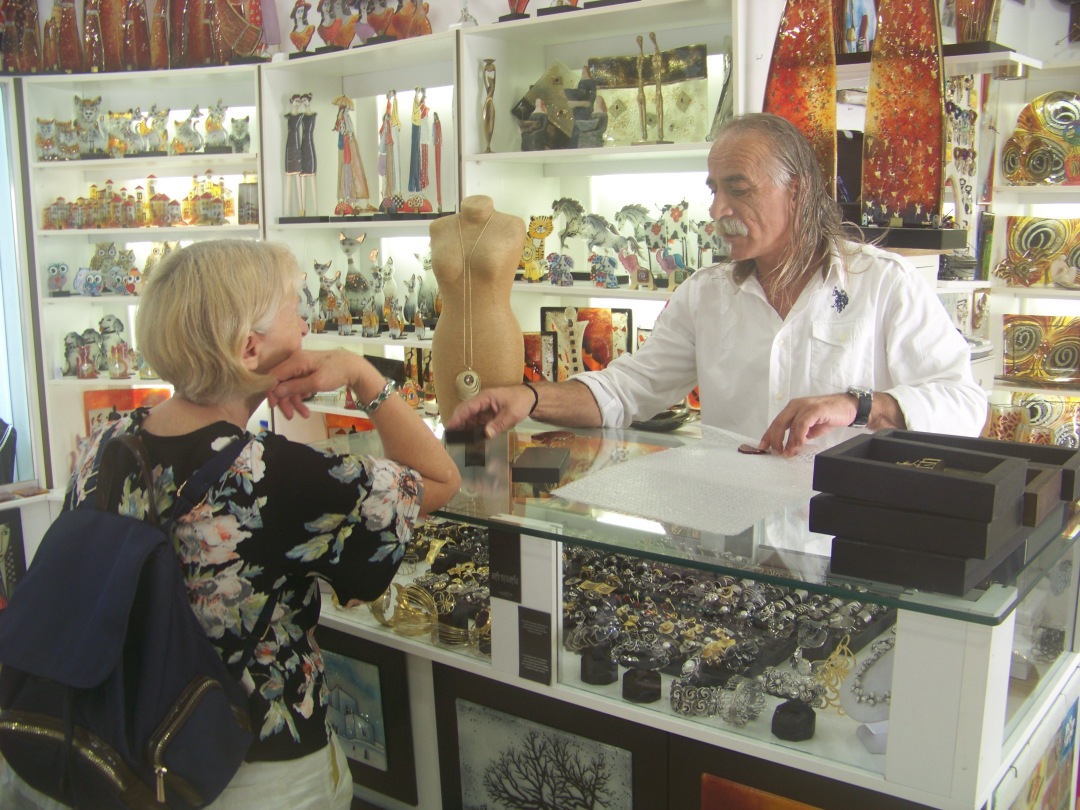 A Christmas bell, a jumper and blouse, dress, glass trees for the windowsill and wooden Easter eggs were all securely packaged up before we exited through the castle walls 3 hours later and headed for the ship.

Back on board we deposited our ‘booty’ in the cabin and made our way to the restaurant. We met Aylo there who had been having a bad morning. He too, like us had spent the morning in the town, but for him it was a reliving of the time when he had visited with his now deceased wife and found it very upsetting. He was in tears. During lunch he asked if he could join us for our afternoon excursion into town and what could we say?

We met him again on the quay for our second attack, this time vowing to take ‘no booty’. Aylo was good company, he was very knowledgeable on all that we looked at and was an expert on where everything was that was worth looking at. The castle keep was a particular high point. Many photographs and the reading of information boards later we found ourselves back in the main tourist area where our earlier entrapment occurred.

A leather bag (Sue), a Gant T-shirt (me) and a Lexus baseball (Aylo) later found us in the main square. Deciding to quench our thirst on a gorgeously warm day we found a restaurant with the highest level of floors and secured a table with wonderful views of the town fountain, square and castle. On ordering drinks I was delighted to discover that my Mythos came in a litre glass boot. How novel and worth a photo.

We stayed chatting and observing the people below for over an hour, enjoying the sunshine and ambience of Greek culture.

On our return to the ship, meandering through the maze of streets, it was a close call on several occasions not to enlarge our already large carrier bags. Sue and I vowed that we shall return here in the future and ‘spend’ more time to get to know the place better.

Back on board we again deposited bags in the cabin and made our way ‘up top’ for tea and sandwiches. Does this never end?

Sue watched our departure from the ancient harbour of Rhodes on deck, the sun was low over the town and the sky was  acquiring that mellow glow, reminiscent of  warm summer evenings in the UK (Charlotte on Messenger mentioned that it was tipping it down in Rothwell).

We went for our evening meal very late and caught the 9.45pm magic show. And it was magic! Novel, amusing, quirky and at times downright astounding. Where do they find these people? Frederiko Fontanili, you should be on the tele.

No late night walk along the deck, the sea was becoming rough and the swaying of the boat made it unsafe for Sue’s bone structure, so hand in hand it was down the lift (for once) and into hammocks.