Another slow start to the day. Looking out of the window we didn’t have the stunning view of a medieval castle to peruse, we faced acres of uninspiring tarmac covered with stacks of containers of all colours.

The ship’s excursions had long since departed by the time we emerged onto the quay to board our shuttle bus to the port entrance. Though first impressions weren’t great, at least the run of warm and sunny weather we have been enjoying continued to greet us.

The Thompson Spirit was also in port, so we were expecting lots of Brits to be seen around the place and we weren’t disappointed. Sue picked up a city map from the information kiosk and we set off following the helpful yellow line leading to the centre. We hadn’t gone more than a couple of 100m when we came across some  ‘Hop on, hop off’ tour buses. With no plans made for this port, we hopped on.

We decided it would be a good idea to stay on the bus for its full circuit, see the various attractions highlighted on our map and then return to them. We knew that as this was Greece on a Good Friday, the locals would take this festival very seriously and shops, attractions and museums would be closed.  Only tourist shops would remain open as two ships were in port.

Around two thirds around its route we stopped at the entrance to Knossus. This was closed confirmed the driver. However, two passengers insisted on getting off. The driver enquired with a  staff member standing to one side and discovered that it was indeed open until 11am. It had opened specially just for the excursions from our ship and was then closing. We were off the bus like a shot and standing at the ticket office with Euros in hand. What luck.  The excursions were leaving while we entered, so, we had the whole site to ourselves along with the others that had jumped at the opportunity.

The Minoan palace of Knossos is accredited as being the site of the Labyrinth and the Minotaur and the story of Daedalus and Icarus. It is thought to be around since 3000 BC and was destroyed by an earthquake. It is a very unique site. Much was destroyed by the earthquake and a later major conflagration, but also much still remains and in quite a good state considering its great age.

It is easy to understand theories that the palace itself was the maze in which the mythological half/man half/bull presided when you see for yourself the multiple layers of buildings, structures, alleyways, roadways and watercourses. Some of which have been restored and really do give you an insight into the opulence of the place, with mosaics, wall paintings intricate masonry everywhere. As for Jordan, Petra is a place you must visit, so is Knossos to Crete.

We managed just over 2 hours at the site before the gates were shut and we had to catch the next ‘Hop on’ bus.

With plans amended we alighted next by the port castle and fish market. The castle itself was unremarkable and we gave it only a cursory inspection before heading into the city along the main route where all the tourist shops lay. Yes, Sue did manage to find a Christmas bauble for the tree.

As it was a Greek holiday the centre was very busy with locals and tourists alike. At the very end of the street we were following we came across a parade made up of school children carrying national flags, the pavements were thronged with cheering locals (we assumed parents). Later we came across groups of families posing for photos with proud uniformed children holding the Greek flag.

In Lion Square at the the centre of the city we found a restaurant with a high balcony and sat watching the crowd below while we had refreshments. It was fascinating observing how they celebrated; most carried little flags, all seemed happy and intent on engaging everyone around in conversation. And the sun shone.

Refreshed, we paid the bill and made our way back to the port via a different route to that which we had earlier trod. As we got closer we became aware that there were little ribbons of cruise ship passengers heading in the same direction, intent on not being left behind. 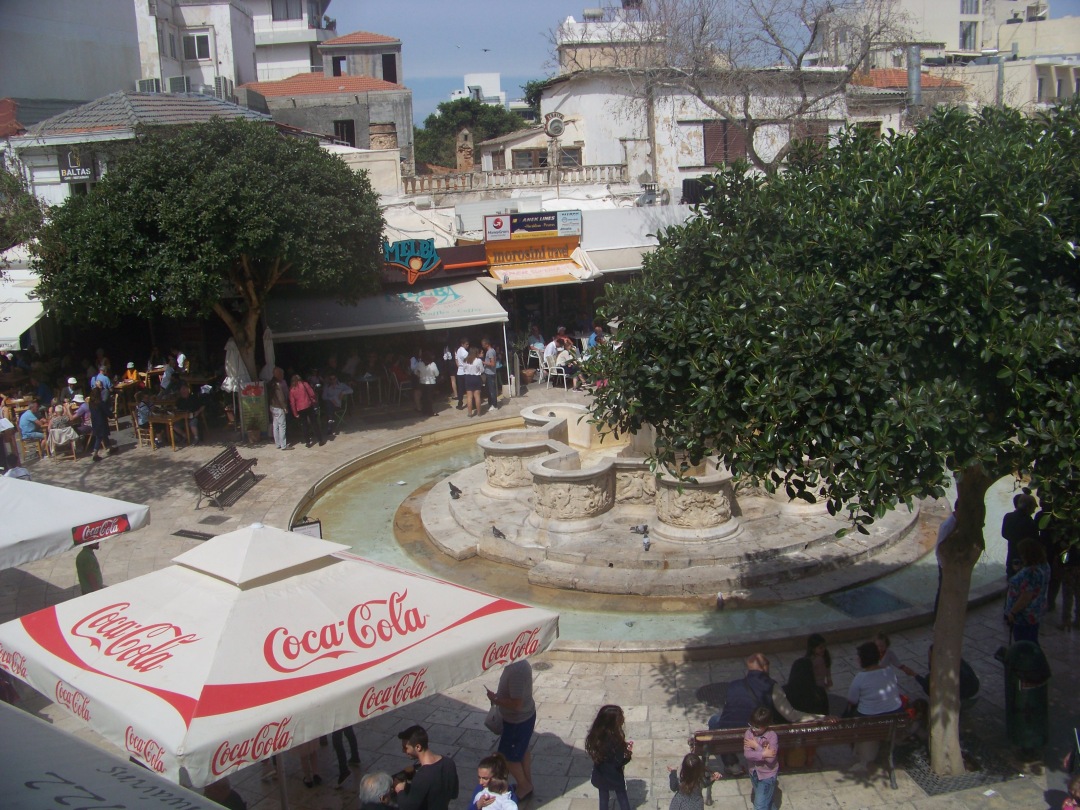 Reaching the port terminal we boarded our shuttle bus and were soon up in the Grill restaurant enjoying a very late lunch.

Sue enjoys watching the ship leave port so she went on deck to say goodbye to Crete. I watched the breaking news from Brussels on the TV in our cabin.

When Sue arrived back in the cabin we shamefully napped until it was time for the evening show, a very good tenor who sang ‘passionate’ songs. Well we are aboard the Romantica!

The meal afterwards was a major disappointment. The Botticelli was advertising the menu as ‘Food for Connoisseurs’, Sue suggested that we give it a try. As usual the service was agonisingly slow, principally due to the system in operation for ordering and delivering the food. The waiters work hard, never stop moving or have time to chat with the passengers. We tend only to use this restaurant on rare occasions. We expected great food and received ill conceived, pretty but tasteless fare. Much of it went back. Sue’s soup was a cracker; pork jowl and seafood with cannelloni beans. When she ordered it the waiter informed us that it was a dry soup.  And it was. It went back.

It was later announced during dessert that the chef has 7 Michelin stars. Hmm, we thought they went up to 3 stars, but perhaps that is just for British chefs. Maybe they meant he has 7 Michelin tyres?

A very short trot around the decks this evening, it has got a little chilly. What is going on? Afterwards, reading the ship’s magazine in the cabin we spotted a typo error for tomorrow – Max temp 12 c?