We had quite a comfortable night, but captain announced that we were behind schedule due
to an adverse current and a force 8 gale. Yes, there was movement of the ship but due to the wonders of technology the ship’ s stabilisers had been deployed and were smoothing the effect of the mountainous waves we could see through the window. A similar effect to that of Quells, which are no doubt being taken by many passengers. In the past Sue would have to only look at a wave and be ill, it seems her sprained wrist has a stabilising effect similar to that of the ships’. 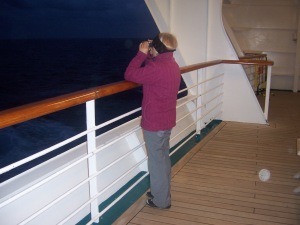 Despite being in breakfast about an hour later than usual we were still only the third couple in. Afterwards, Sue fancied a walk around the deck???? Kitted out for this little adventure we began our survival march. Reaching the bow we found the starboard side blocked off, retracing our steps to the stern we found a similar blockage. It was at the stern that we came across one sole passenger fool hardy enough to venture out. He was well wrapped in many layers and leaning over the rail. We didn’t investigate closely what he was doing. Hurrying back inside we returned to the cabin to drop off our arctic gear and pick up the ship’s news paper. It was around 20 minutes later that the feeling in my ears returned!

We attended a lecture titled, ‘How England Won the World Cup’. It was a chance to reminisce, I was surprised it appealed to Sue and she remembered that she missed the match because was on a bus returning from a sports meeting when it took place. I watched it at home with my mum.

Sue later attended a short seminar on how to use the launderette on Deck 8. She said she found it fascinating. I was returning from a fruitless search for vacant eats in the atrium in order to read my book! When we met up again, we found a cosy place near the art gallery to read. Incidentally, the ship’s newspaper advertised that there is a 50% flash sale today on all paintings, not good news for Tom and Jerry. Now, how do I broach the subject at dinner tonight?

A rather substantial lunch (more than planned) was taken in the Ligurian, we sat with two other pleasant couples who had as usual been on hundreds of ships and were only going to be home for a week or so and before catching another. It seems that the rumour that for £99 you can stay on board for the Oceania’s next destination to the Caribbean may be true, due mainly to there being a shortage of passengers for the trip.

After lunch I caught 40 winks while Sue went to a seminar on feet. She returned with two sheets of paper with an outline of her feet. Apparently her feet at OK, it must be the rest of the body that is causing problems, I look forward to the seminar on bottoms and the associated print. I am intrigued as to what she is going to do with her pictures, colour them in and scatter glitter over them? I suppose I will have to blu-tac them to the cabin wall and draw a smiley face on.

We read our books outside the Compass bar and listened to a quiz going on inside for much of the rest of the afternoon. The sea outside the window next to us looked mountainous, the stabilisers were doing a really good job, my beer and Sue’s cocktail didn’t slop over once!

We took another foolhardy turn around the deck, with the same result for my poor ears! Then as they warmed up we packed in the cabin and then changed. Having stuffed everything into our suitcases we then watched the Headliners in the Footlights Theatre perform the Blues, excellent. On return to the cabin we placed the cases in the corridor in readiness for the crew to disappear them. 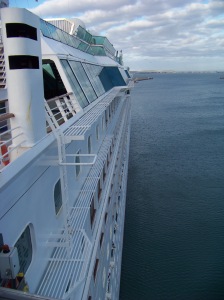 We dined with Daphne and Colin as Tom and Jerry were eating elsewhere. Afterwards we watched the passenger talent show and each of the acts received tremendous applause. Much of it well deserved.

Returning to the cabin we noticed the cases had gone. We put the clock back one hour and set the alarm appropriately. In bed for 12.30am.