Breakfasted at 7.45am then went on deck to check where we were, the ship was slowly edging itself alongside the dock in La Coruna and it was still dark.

By the time we had changed into our gear for the predicted weather (9 degrees and showers) and disembarked, the sun was up, it had gone past 9am and it looked like it was going to be a nice day. As we passed through the passenger terminal we had expected to pick up a city map, but there wasn’t any, we would just have to use the rather featureless one provided by the ship.

We headed right along the port road to take some photos of the building frontage that the city is famous for, they call it the ‘Crystal City’. From there we continued to very nice harbour park and took some photos of the ship. Continuing on again we came across the fortifications that protect the harbour. It was this that Francis Drake attacked in revenge for the Armada which set off from the port of LA Carina. Apparently he was repulsed by the town’s heroine Maria Pita who is commemorated everywhere in statues and paintings. Away ties are always notoriously difficult, but we won the home leg by such a large margin that we eventually went on to rule the world!

The fort itself is well-preserved and a must see for any visit, the internal exhibits trace the history of the location right back to the Romans and beyond. We were accompanied by a large party of teenage students and teachers, though noisy, when the teacher stopped to do some explaining, they all were quiet and attentive. 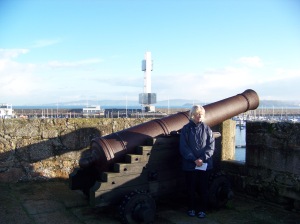 We moved on and found General John Moore’s grave in a small picturesque garden. He was in charge of a 30 000 strong contingent of British troops and was being chased by Napoleon with 80 000 soldiers. Like Dunkirk, he managed to evacuate the majority of his men onto ships and back to England with the loss of only 900 men and himself. His wish was to be buried where he fell, and he was.

We moved across the road to the Military Museum. Another must visit place, especially for those that enjoy militaria, it has a superb collection of pistols and rifles, with General Moore’s battle depicted in little toy soldiers. It brought out the little boy in me, I would have loved to played with them, though probably in my scenario ‘Boney’ would be the one legging it home.

The sun was getting a little fierce so we ambled down to the shore to catch the cooling breeze before climbing up into the town to visit the oldest church in the area and a place of pilgrimage, even to this day. There was not a lot to see inside though I found that quite refreshing as I am about bombed out with glittering, elaborate Spanish and Portuguese Catholic churches! Some where in there was the sacred bones of some saint, but we didn’t find them. There was a rather contented dog sitting outside.

Shunning all other churches, and there were many, we set to meandering the pleasant flagged streets of La Coruna. While we were popping in and out of shops there was a brief shower, then as quick it came, it disappeared and was replaced by sun. We eventually worked our way all the way to the other side of the port, had a sit down and then worked our way back along streets we hadn’t before. When we were parallel to the ship, we reboarded. It was 2pm. 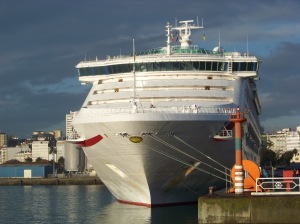 Lunch was taken in the Plaza then back down the gangplank to visit the port shop for Sue to purchase a few items that she filed to find I the city. Returning to the ship we got out our books headed for the Atrium and settled down to read with beer and cocktail. We were still there when the ship slowly eased out of port. We watched from the comfort of our seats as the ancient Lighthouse of Hercules slid by and then we nosed our way through an increasingly turbulent sea towards the Bay of Biscay. We traversed this body of water on the way south without noticing, but I fear on the way back we will be experiencing its other face. We have a sea day tomorrow. In preparation, as soon as the coast slipped towards the horizon Sue and I feeling a little weary, returned to the cabin to catch a few zzzzzzzz’s.

We dressed informally for dinner, both of us choosing the special Marco Pierre menu, and it wasn’t bad. The following entertainment was the Irish comedian, again he was very funny and at times my sides hurt. Just after midnight as we settled in our cabin for the night the sea began to make its presence felt.