We encountered rough seas during the night. The lurching of the cabin in random directions was exaggerated because we are located at the front of the ship and high up on deck 8. Great for access to all the ship’s facilities but not good in poor weather. I find these random movements relaxing and generally sleep well, though when the bow crashes through a very large wave it does it with a bang and a lot of juddering, we had four of those in the night! Sue slept well and the obligatory seasickness did not manifest itself. We were both in breakfast for 8.15am and tucking into the usual fare, we did not have many fellow passengers as company, and none with walking sticks had made an appearance yet.

When I had switched on the TV this morning the headlines was the rather spectacular crash of an aircraft into a bridge in Taipei. It had only been four hours since the incident and the footage that was being broadcast was a testament to today’s technology in getting the news out to the world. Amazingly there have been survivors.

Afterwards I sat in the atrium, next to the window and read my book, occasionally looking out when we passed through a particularly large wave. Yarrrrr, there she blows!

First lecture of the day was a run through the 60’s year by year and an outline of the significant events that took place. It was mildly interesting and an easy way to spend a rocky morning, sat down. Not surprisingly the deck competitions had been abandoned for the day. 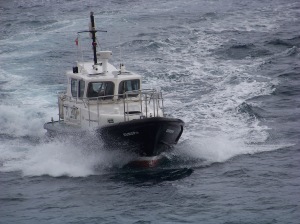 I had a minor panic when I went on deck to take some photographs of the rather dramatic sea. When I clicked on the camera it didn’t work, the I remembered I had taken the battery out to charge it last night and not replaced it doh! Walking back to the cabin to get it I somehow lost the retaining cover that held the battery in the camera. Quickly retracing my steps I couldn’t find it anywhere. Perhaps it fell out in the cabin? Back I went. No! So it was back to the deck to check there. Resigned to buying a new camera on board I returned to the cabin to be greeted by Sue gleefully holding the cover, old Pocahontas had spotted it in the corridor, she had been returning from having a coffee.

Back to the deck and I think I took a pretty good photo of the conditions, perhaps every good shot needs adrenaline? I met Sue in the Theatre to watch the film Jersey Boys. Lunch was taken in the Plaza at a window seat to watch the white-topped waves rush by from our safe perch way up high. We shared our table with a couple of ladies from Shropshire who Sue struck up a conversation with. Afterwards we took a stretch around the deck, as the bow section was taped off we had to traverse this through the ship itself. On our last circuit we spent some time sitting at the stern enjoying the sun, watching the white froth spewed by the propellers disappear rapidly towards the horizon.

We didn’t fancy the piano recital, bingo, table tennis competition, talent show or photography lecture on offer and sat in the atrium reading and sewing. It just seemed the sensible thing to do. After a while Sue’s wrist began hurting so she returned to the cabin for a rest and I had ‘Old Thumper’ as company. Presently I too joined her, to be greeted by our cabin steward who gave me a questionnaire and seemed most anxious we would give him an excellent report. I assured him we would.

It was a formal night so we donned our glad rags for the last time on this cruise and then picked up a photo from the photo desk that had been taken at the table a few nights prior. We had a full complement of fellows at the table and the conversation centred on how bad last night’s singer had been. As we left the table Jerry caught us was keen to show us a photo on her mobile of the painting they had just bought on the ship. By a weird coincidence we had stopped and looked at the same painting when we were picking up our photo. We had thought it was crudely done and the over large frame made the painting of a prostitute rather ugly. It was titled Red on Blue and cost £6490.00. We have been asked to take a photo of our painting to show her. Hmmmm.

tonight’s show was such a contrast to that of last night. A tribute to Queen by the Headliners, absolutely wonderful. I spoke to the lead singer afterwards and told her that her song, ‘The Show Must Go On’ was spine tinglingly good.

In bed for midnight and still choppy.