Breakfast at 7.15 and we were already secure in harbour having arrived in Gibraltar just before 7am. It was still dark and all we could see from deck 7 was the lights of the town twinkling away on our starboard side. We disembarked with sun just having risen at around 8.30am. We were due to depart the port by 1.30pm, so there was a mass exodus of passengers from the ship.

Some had already left on their tour buses while others queued for the shuttle buses into town, but we joined the line of fit walkers and briskly completed our 15 minute journey to the beginning of Main Street under brightening skies and a stiff breeze. We had mingled with children of various ages making their chatty iPod way to school and they like us had to run the gauntlet of commuter traffic at each junction. 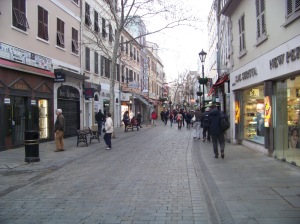 Passing under the arch of Casemate’s Square we stopped awhile and took photos then watched the citizens of Gibraltar hurrying to work, it wasn’t yet 9am and some were settling themselves down for a quick breakfast at the many little cafes around us. We slowly wandered up the principal shopping street, Main Street. We took our time looking through windows at the merchandise inside as most were closed. The shopkeepers knew that the Oceana was in port as many windows displayed various discounts on the production of our boarding card so we were confident that they would be opening today.

We stopped to take photos of the Governor’s house and the marching British soldier outside. We didnt’ take photos of the red telephone boxes, the British Bobbies on the beat or the traditional British pubs scattered along our route. Reaching the end of the street, we looked at the map and thought where to next? If the cable car had been working to today we may have ventured up the Rock, of course we had the option of walking or taxiing there, but as we have already been up their a couple of times on previous trips we wanted something new. Consulting the map I remembered that Rosia Bay was where the pickled body of Lord Nelson came ashore after the Battle of Trafalgar and nearby was a 100 tonne cannon. That would do. 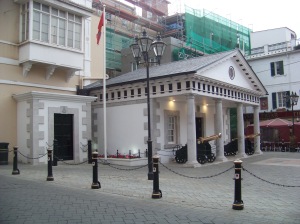 The route there was relatively uninteresting and took about half an hour of leisurely walking. We saw no other intrepid passengers. We found the cannon quite easily but opted to visit it on the way back. We found Rosario Bay without too much trouble and descended a very steep slipway to the water’s edge. It was in a very sad condition, much of the concrete quayside had cracked and slipped, though you could tell that at one time it had been a very impressive anchorage, though not for today’s large modern ships. The waters were crystal clear and there was a group of divers suiting up to test the waters. While we clambered over and along the tangled mass of rocks that had once been the harbour wall a couple of the divers submerged and we took photos of the surroundings. We could find no trace of a commemorative plaque. Disappointed we returned to street level via a small narrow door set in the wall that spiralled upwards through a urinary air blanket, passing another small door set in the confined passage labelled Military Distillery! Well I never, so all those tots of Navy Rum issued to our brave sailors over the centuries pass through the body without losing their potency. And we modern guys just dribble it all while looking blankly at a tiled wall!!!! 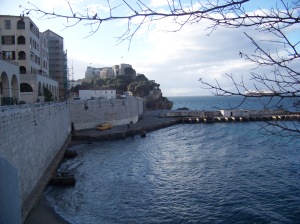 As we were about to retrace our steps we met another couple from the ship who were on their way to Europa Point and its lighthouse. We followed them for a while through a couple of tunnels before coming to the picturesque Camp Bay. We spoke again and they told us it was about another 10-15 minutes away. Spotting the lighthouse cliffs I gauged it to be in excess of half an hour, so we took a some photos and turned around.

Presently we came to the cannon emplacement and to our surprise found the Lord Nelson’s plaque we had been searching for. Paying the lordly sum of £1 each we entered the 100 tonne Cannon Museum and explored. The information boards were well done and packed with just the right amount of information, sufficient to keep the topic relevant and exciting but not too much to induce a state of comatose in avid Coronation Street watchers and the like.

Making our way back to Main Street we were please to see that all the shops were open. Luckily most of our fellow passengers had elected to patronise those establishments that sold alcohol or tobacco, so Sue’s search for a Christmas tree decoration went unhindered. She eventually found one right at the very start of the street.

About halfway down Main Street (after we had visited a quaint 15C church) Sue spotted and art gallery up a side street (divine intervention). We both took a liking to a painting by a local artist of Rosia Bay. The ticket price was £90 but on asking, this was reduced to £80. Sue inquired as to a discount and there was a further reduction to £75. Somehow during the wrapping, the artist was phoned and the price came down to £50. Now we have the problem of where to display it. 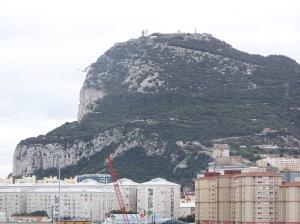 We returned to the ship and we re back on board for 1pm. Lunch was taken in Ligurian Restaurant. I sat next to an Irishman who I guess was a member of the Travellers. He had been in the UK for 19 years, I suspected that he was a Gang Master in the vegetable fields in Boston though he did mention prawns as well. He certainly worked his way through the menu. He mentioned that at rhe moment his wife was elsewhere on the ship, not doubt selling lucky heather to the crew after a morning tarmacing Gibraltar runway. You meet all sorts on a boat.

Afterwards we returned to our cabin, Sue to do a crossword and a sleep and me to read my book. When she woke we moved to the Atrium and I supplemented a chapter or two with London Pride.

To blow out the cobwebs we took a turn around the deck as the light began to fade, we met one other soul on our windswept journey, one of the dance troupe, probably toning up before the show as she was purposefully stretching out. Returning to the cabin we changed for dinner, it is a 60’s theme night for the attire, but like most other passengers we didn’t bother.

Prior to the evening meal we sat in the atrium and listened to some piano music before joining a full complement of fellow diners at the table. Sue fancied watching a blues singer in the Footlights Theatre, I fancied listening to the flautist of the other evening in the Starlight Theatre. We hot-footed it to Sue’s choice . To be fair some people in the audience were quite enthusiastic about the ladies performance, but I am afraid that having to admit that you couldn’t remember the words to the second verse of a song after you have sung it, or remember the names or order of the songs in your set and having to peer down a scrap of paper in the footlights to read it, smacks of poor preparation. The range of her voice wasn’t vast and several songs began in the wrong key. However, it summed the performance up when she fell down the steps twice at the end of her final song. Watching a bumbling performance such as this was quite endearing to many in the audience, but this lady appeared on the Voice! Unlike others who only clapped politely to show their disapproval I should have left to watch the flute player who had talent.

It is a sea-day tomorrow. 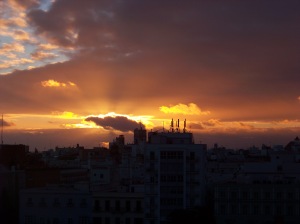