Excellent night’s sleep and Sue woke saying that her wrist felt much better, despite it being still very swollen. Breakfast was in Jardine and I had a couple of wonderful poached eggs on a bun base laid on a bed of fresh salmon and topped with an exquisite sauce that had just a hint of cheese. Mmmmmmmmmmmmmm!

We had a quick turn around the deck, but the weather was cool and miserable, you could see several squalls around the ship but they appeared to rapidly pass us by, though it was obviously a matter of time before we would plough through one, sensibly we took shelter back into the cabin. Somewhere between the two Sue managed to lose one of her gloves. 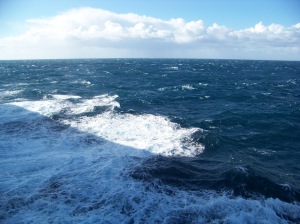 First lecture of the day was on the Beatles. Enjoyable but as it was our era we knew most of the information imparted. Sue remained in the theatre to watch a port presentation on Cadiz while I relocated to the photography studio for a lesson on how to take good landscape photographs. We met again back in the cabin before proceeding to lunch in the plaza.

I spent an hour in the Atrium reading my book and occasionally glanced up to watch a line-dancing class, it seemed fun and perhaps if Sue could be persuaded we might give it a go?

We had lunch in the Plaza. Afterwards, I went to a port presentation on Gibraltar then after a couple of chapters of my book I relaxed in the Footlights Theatre listening to the music of Grieg by the pianist Nick Powell. Very beautiful tunes (I nearly drifted off during the second set). He had once performed in the Grieg Theatre in Bergen, we had been there during the autumn.

I found a little niche in one of the bars and settled down with my book, but it wasn’t long before I was disturbed by a quiz. It was too difficult to concentrate on the plot so I gave in and concentrated on the answers: 17/20.

Returning to the cabin I found Sue had dressed for the Captain’s Party. She went to listen to some music while I showered and changed. The part was held in the Atrium and after a glass of wine and a photograph from the onboard photographer we stood and listened to the Captain as he spoke a few words. He wasn’t a patch on the captain of the Oriana who had natural charisma and an eclectic sense of humour, this one is hopefully a better seaman than he is orator. 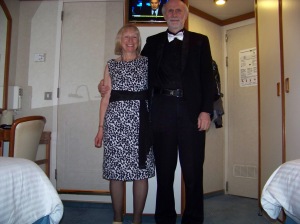 Dressed in our glad rags for the evening meal we had a choice of menu specially prepared by Marco Pierre, but notably no one chose any of his dishes.

The entertainment in the theatre was a song and dance troupe, who performed a variety of dances from musicals finishing up with the Can Can. Very energetic and quite exhausting to watch as it involved a lot of audience clapping. We will sleep well again tonight.