Woke at 7.30am, switched on the TV and clicked over to the channel showing the camera on the bow. Still dark but there were some twinkling lights around that were smudged with what I guessed was rain! Breakfast in Jardine then onto the deck to check where we were. The ship was slowly progressing passed the outskirts of Lisbon which was just about visible in the gloom and yes it was drizzling lightly so, curiosity satisfied I descended back into the bowels of the ship and the sanctuary of a warm cabin.

Sue and I then dressed and prepared for our day out in the city. On the TV we could see the bridge approaching that we
had been forewarned by the captain during the address at his party last night. On deck, along with many of the passengers we took photos and video of the ship’ s passage underneath this feat of engineering. Returning to the cabin we finished our preparations and then disembarked.

The drizzle had stopped. Ignoring the queues for the excursion buses and the pleas of the many waiting taxis we set off left of the terminal, towards a very impressive square that could be seen from the ship. It took around 10 minutes to get there and yes it was as large as it appeared from a distance. After exploring its expanse we chose to wander up one of the pedestrian esplanades that led towards the centre stopping briefly in one shop for Sue to buy some cards and slightly longer in another specialist outlet for me to buy some 20-year-old vintage port (when in Rome).

We came across another impressive square, this time purchasing some custard tarts from a patisserie that had been recommended by the ship’s port presenter a few evenings back. We sat on some theatre steps and scoffed them. Very sweet and probably very moreish, if we had some. Our wanderings took us into a quite dismal looking church, but once inside it was another story. Not dripping with gold or statues or even painted ornately. It had burnt down in August 1959 and they had rebuilt it. But wow, had they done it right. Of course the roof had been replaced but the rest of the building’s structure had been left as the day it had caught fire. It had been cleaned and the pews etc. had been replaced but essentially it was a time capsule of that momentous day and it looked so right. Sue remarked that you could smell the smoke, of course you couldn’t but that is the effect I think they were after. A brilliant building and so full of soul. In contrast, we visited the Cathedral later in the afternoon and were disappointed by its lack of character, just another huge empty space that they have tried to fill with icons. 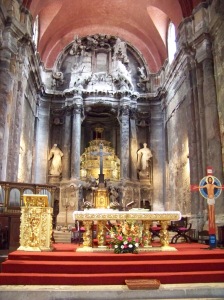 Amusingly, it was while we were leaving the first church that Sue visited the toilets. On ship, the one-armed bandit has severe problems putting on tights, watches and other necessary bits and pieces. Buttoning her trousers has so far remained beyond her skills and I have been lending a hand. Now faced with wandering the streets of Lisbon in trousers that were likely to disappear towards her ankles, at any given moment, she requested that I again lent a hand. There was no where private to perform this act, so I am afraid the deed was accomplished on sacred ground. Whether this had anything to do with the two prostrate priests we came across I wouldn’t t like to say, but I guess celibacy can be difficult at times.

We visited the castle next. We both agreed that it was one of the better ruined castles we have ever visited. Much of the structure was intact and that which was missing could be easily interpreted. The views over the battlements were great for photography. Well worth a visit. 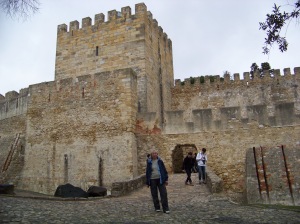 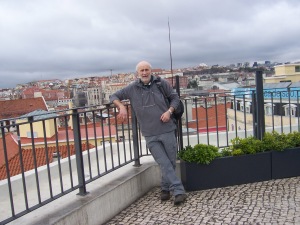 We returned to the ship via the Cathedral and a short section of the old castle walls just as some of the tour buses returned. We had lunch in the Jardine and the retired to the Atrium, Sue to do some needlework and me to read my book.

By and by, my eyes started to get rather heavy, so I returned to our cabin to replenish the batteries which had obviously been drained by 5 hours of tourist activities. Sue, hardened by years of retail therapy opted to go on deck and watch the ship leave port and then watch the shenanigans of the leaving party, aft. Afterwards she did some more embroidery in the Atrium before returning to the cabin, waking me up and then falling asleep herself. I read my book.

I notice on BBC World weather that the UK is having a fair bit of snow. I bet the roads are in chaos and the schools are shut.

Dinner was smart informal, making dressing for the meal considerably quicker, though Sue did have a problem with the hairdrier which required the cabin stewards attention to show her which button to press to make it work (I wonder how many times he has had to do that?) Two of our fellow dinner partners were taking advantage of an Indian themed night in one of the other restaurants, so there was just 4 of us on the table; Daphne and Colin.

We chose to watch the Four Tunes in the Footlights Theatre for our evening entertainment. We had seen them on the Oriana and they again didn’t disappoint. In bed for midnight.