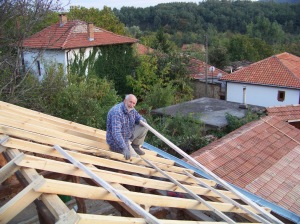 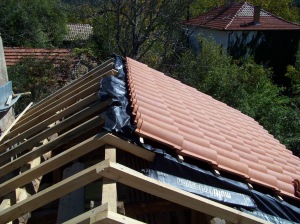 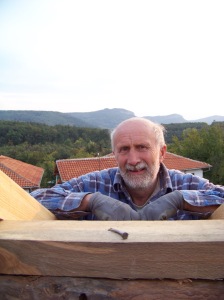 The day was another scorcher, even hotter than the day before. Working on the roof after midday became quite difficult, ladders become hot to climb and the black material already laid a definite no-no to touch. Work slowed to a lethargic crawl punctuated with many water stops, until we ran out of water and then had to resort to a more satisfying if not more dangerous beverage.

The morning went well. David laid the tiles already up on the roof across half of the front-side, and they looked really very good and straight. I experimented in converting the chute we used to take the tiles off the roof into an elevator to slide the new tiles back up to the balcony. By the time David had used all his tiles I had refined my contraption to the point where I could load pack of 8 onto a little sliding platter and pull it up effortlessly after the application of wax rubbed on to the contact surfaces from a candle to the balcony. After just 10 minutes I had raised 5 packs (40 tiles). I can sack- barrow 16 tiles from the garden to the chute, lift/slide 8 tiles to the balcony and carry 4 tiles at a time up the ladder from the balcony to the roof.

After lunch we secured the facia board at the back of the house in readiness for the guttering. As the afternoon was stifling I took a welcome break while David pre-painted them before fitting and we had to wait until they dried, so for half an hour I lay under the roof and nearly slept.

Next we set the last rafter in place on the end of the house, laid material across the roof, worked out and fitted the first lat then fitted the rest against this measurement. Again, we ran out of daylight, for which I for one was grateful.

We ate in the same bar as the previous night and again the food was good. We stopped at a shop on the way back for some provisions and I bought a large chocolate bar each with the aim of watching a film and pigging on the sweet stuff. Like many of our other plans it went awry, after scoffing the chocolate in double quick time we went to sleep. Not even 10pm!