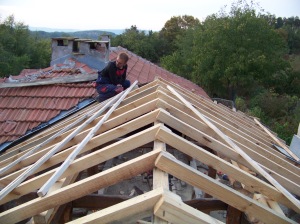 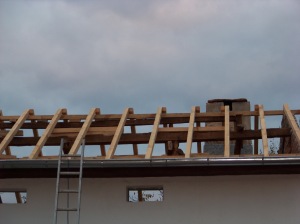 We were hoping to get most of the tiles on today, but we didn’t.

Being on a roof in full scorching sun is not pleasant! The work went slow and mistakes were made and had to be rectified. During the morning we painstakingly set the metal edge to the place which the end tiles would sit up against. First we had to fit the bitumen material underneath and then cut, position and nail the lats through both. It took both of us to hold them in place, with David on the top of the ladder with a 15m fall below and I perched on the rafters we had fitted. Having done this and making sure that it was right, David laid the end tiles and then the next 3 rows. On checking the look of them from below at the front and side, everything seemed spot on.

As we prepared to move along the roof, pedantically we checked the position of the metal. IT HAD MOVED!!!! Only by 1 cm at the top, but this 1cm would offset our angle and progressively increase as we went further along the roof. We discussed possible remedies at length but the inevitable had to be faced. The tiles had to come off, the lats prised up and the metal relayed . Disheartening, but we did it.

With that done I changed into shorts, bush hat and sunglasses and risked the splinters as the sun was now quite fierce. We passed on lunch as we didn’t feel like eating with the heat but stopped regularly for glasses of water, luckily we had run out of beer or might have been tempted and made even more mistakes.

During the afternoon the postman arrived with a parcel for David. Two strobe lights to put on the new loft space when finished to keep out/annoy the sossals. I rather think he is inviting them set up a disco and is more likely to attract the party rat set and he will be soon hearing continuous Bee Gee’s music emanating from the roof. A little later a van turned up with two shifty Bulgarians. They had some rather nice tools in the back, drills, generators etc. and wanted David to buy them. They obviously were the proceeds of some thievery and he sent them away.

Back on the furnace roof we decided to lay out a longer run of material and lats to catch up on lost time. This we did, diligently measuring the distance between each lat precisely (so we thought). With a last look at the position of the lats before the tiles went down one didn’t look right. On investigating it dawned on us that the end of one of the previous lats that had already been re-sited one had been measured incorrectly by 3cm. After prolonged discussion on the effect of this (the tiles already laid, did sit well) we again faced the invitable and took them all off again. Remeasured and this time (hopefully) nailed them in place. However, before we did this we decided to punish ourselves for our lack of accuracy by moving 80 tiles from the garden next door (that was a siting mistake from the first day that has now come back to bite us) to the first floor balcony. The effort totally exhausted the pair of us.

As we nailed in the last lat the sun had gone down and we couldn’t see to re-lay the tiles so we climbed down the ladder.

We had our evening meal in a bar that we had not been to before and the food turned out to be surprisingly good, but best of all they sold the dark beer that is so hard to find. We were fast asleep and very tired in bed before 10pm.