We wake up thinking roofs. We spend the day talking about roofs. We go to bed and dream about roofs. Roofs aren’t so complicated back in the UK. They are made from standard materials, machined to accurate dimensions and thus are put together using logical and architecturally sound methods. Bulgarian roofs (especially this one) was put together using an adz to shape the timbers, nails to join everything, and there is the rub, the timber is so hard that they could never get more than half a nail into the wood before it is bent over.
Much of its structure relies on the stability of the box and the hardness of its wood held together by half driven in nails. It has proved itself as a roof for well over a hundred years or so, but UK building regulations would have it condemned. Nipping out into the woods and cutting a branch or sapling for a rafter or beam that bent in a particular way so that it met another peculiarly shaped one works here because the timber used is amazingly tough (though still not immune from woodworm or rot). Our task has been to straighten and restructure the internal shape of the roof to one that we are familiar with whilst using modern Bulgarian materials that are nearly but not quite standard. A 3 by 8 timber is just an average, don’t expect every piece that you pick up will be exactly the same, it won’t be. Bulgaria is now part of the EEC, they have a lot to change. 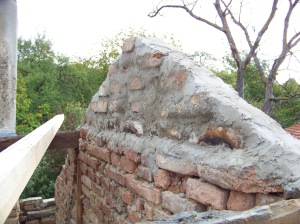 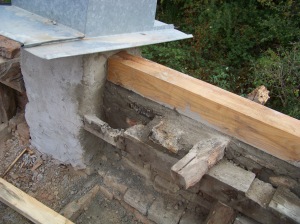 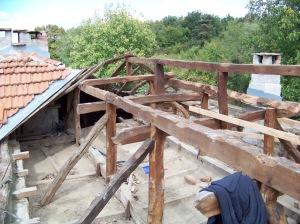 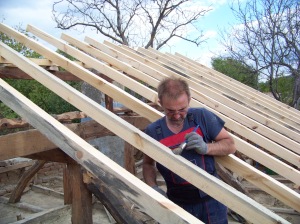 Sevdolin came today. He worked on the wood store roof and generally kept to himself, though he expressed disapproval of our work on the house roof, but wisely left it at that (I like Sevdolin). During the afternoon over lunch of a tasty but confused stew/soup/ goulash made by David from a few packets and tins that he randomly picked from the larder, I did have a long chat with him concerning the love of his life, motorbikes.

The roof work went on at a steady pace, both us are well versed in what we are doing now and apart from the occasional stop for a chat to discuss an issue that might crop up we are silent. Though there is the frequent thud of head on rafter to be heard which prompted me to fetch my bush hat and line it with a tea towel to reduce the inevitable impacts. To illustrate how close David and I have become, on one occasion whilst supporting a rafter we both turned around and head butted each other. He was considerable more stunned than myself due to the amazing properties of towelling as proved by the large lump on the side of his noggin.

At the end of the day we had completed fitting all the rafters bar one, which was left for further consideration as this married two roofs together. We have some minor snagging left to do before tackling the latting and laying back of new tiles.

That evening we were so tired we didn’t feel like eating, but watched the obligatory film (Host) and went to bed.