Favalosa Six
We had a very early start this morning. We were in breakfast for 6.30 am. The ship was docking by 8 am in Recife, we had booked an excursion that was to leave at 8 am. Recife must be a huge city as we seemed to be steaming along the shore with skyscraper after skyscraper marching on onto the horizon for ages. We watched the ship dock and then went to the meeting point to disembark. The bus was waiting for us on the quay. 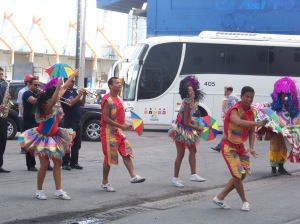 Our first stop was in Igarassu, it is one of the earliest settlements in Brazil and we went to see Sao Cosme e Damiao Church, one of the oldest in the country. After a wander around taking plenty of photos we were back on the bus and headed to the Ibama Centre for the Protection of the West Indian Manatee. They were held in tanks. Very large creatures (the size of large dolphins), slow moving and with pudgy faces. The adult males and females were held in separate tanks (I suppose it gave the males a bit of peace). The young from these were to be released back into the wild, though we were not allowed to disturb them and they were held in tanks we could see but not visit. They look quite primitive creatures, and apparently taste very nice, hence they are endangered. 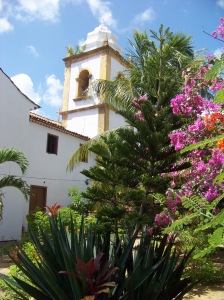 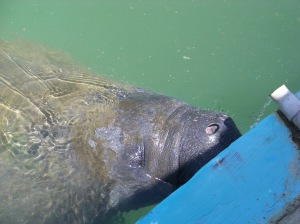 From the Ibama centre we boarded the bus again for a very short drive to catch a boat waiting to transfer us to an idyllic palm fringed, white coral beach. The boat disgorged us on a very small island. It reminded Sue and I of the Maldives, except this one happened to be in the centre of a large lagoon, one side open to a strikingly blue and sparkling sea. We wandered around the entire islet taking photos. On one occasion I waded out to one of the local women who was gathering shell fish and with her son we managed to have a conversation. sharing a laugh or two as her son took our photo together. 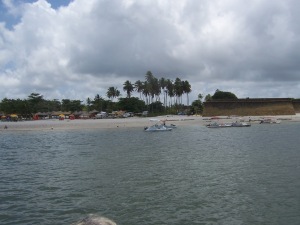 From this little corner of heaven we returned to the Favalosa. She was due to sail at 1 pm, however at 1.10 pm we were still making our way through the Recife traffic. The captain waited. As soon as we boarded we went for a lite lunch, or rather I did (I think Sue must still be fattening up her worm) and Sue opted for something a bit more substantial. During the afternoon Sue worked off a few calories and read her book on one of the decks, exhausted, I rested in the cabin.

A little later in the afternoon we found our way to one of the restaurants and I had coffee and sandwiches and Sue had tea and fruit. The Captain came over and had a chat with me. He was quite a short man. We discussed navigational issues etc. I inquired as to his favoured strategy in the case of abandoning ship. Did he prefer to conduct matters from the bridge or was his preference from a life-boat some 200 metres off the port bow to get the full picture?

Sue and I took the binoculars onto Deck 12 to watch the sunset. We sat in deck chairs watching the sun rapidly set over a distant city-scape. Using the binoculars you could appreciate the speed of rotation of the Earth as the sun sank below the horizon, silhouetting the skyscrapers against a reducing and ever orange disc. As the last shred of sunlight disappeared, the Italians on deck gave an impromptu applause. I think they may have more soul than the English.

The evening meal was torture. Last night I sat next to the gentleman from Manchester as the Dorset couple were absent. Being sociable I thought I would chat to him (he always sat at the other end of the table to me). I suspected that he had poured a bottle of ‘Old Spice’ over himself prior to visiting the restaurant! He must have, the smell was unbelievable, over the time it took to eat my meal, the fumes stripped the lining from my throat. This evening when Sue and I arrived at the table, I had to sit between him and his wife. Thinking that the ‘Old Spice’ episode was a one off, perhaps a mistake back in the cabin proved incorrect. Not only had another bottle of the stuff bit the dust, but his wife had emptied a bottle of ‘Lily of the Valley’ over herself!!!! It was as if I had been locked in a perfumery and someone had taken all the tops off the samples. I could not smell or taste any of the food that I ate, indeed opening my mouth to talk only increased my sensitivity to the pungent odours. To make it worse, Jonathan (the guy from Dorset) knew exactly what I was going through as unknown to myself he had suffered it for three nights running, which probably contributed to their absence last night. He wore a constant smug smile all the way through the four courses. As I sit typing this, my clothes still carry the choking aroma of 60’s perfume. Tomorrow, I shall be first in to the restaurant and sitting at the end of the table!

Tonight’s entertainment in the theatre also stank. A very large Brazilian lady was singing a medley of Jazz and Blues. However, ‘It was too good to be true, I couldn’t take my eyes off of you.” sealed it as the third song was unrecognisable from the original or any variant I have ever heard. We joined the throng and left. There was a few jazz stalwarts that seemed to be finding some harmony or rhythm to the act, but not Sue or I. We took a turn around the deck, decided against listening to any of the other acts in the many bars and mini-theatres and called it an early night.