Favalosa One
Despite last night’s downpour, we woke to the sun shining and a blue sky. As all good mariners should, we ate a hearty breakfast (hopefully the fishes will not appreciate that later). We decided to say farewell to the beach. It looked so nice and the waves were ever-so inviting, it probably wasn’t a good thing to have done. We should have stayed longer and have promised to re-address that situation in the future. Soon we had the surf washing delightfully over our toes as we ambled along the surfs edge, both of us were so enraptured by the heaven we were soon to leave behind that neither of us noticed a very large wave charging down onto the beach. Too late to sprint (not that we have done that recently), so it was a bit of a soaking. Looking on the bright side – it was refreshing! After a few more steps with the sand now clinging to my toes I picked up a very large moth/butterfly that had suffered the same fate. I put him on my T-shirt and he seemed keen to hang on and dry off. By the time we had reached the end of the beach we were more or less dry (a lie). We sat on a wall and for a while watched the more sensible beach walkers. 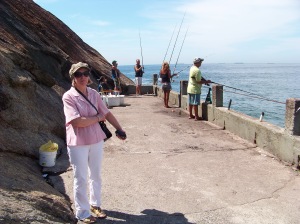 Sue was keen to walk along the cliff path to see the locals fishing, so moth and I duly followed. On return along the path I photographed one of the street people that had fallen asleep against the cliff. He was wearing a green Leprechaun hat with lit cigarette dangling from his mouth. I suspect the photo I took could easily make the cover of National Geographic and make him and me a fortune. 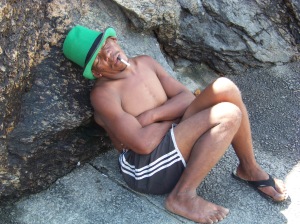 On the way back to the hotel I dropped my old friend mothy onto the trunk of a suitable tree (he blended into the bark amazingly). I hoped the vultures overhead weren’t watching. 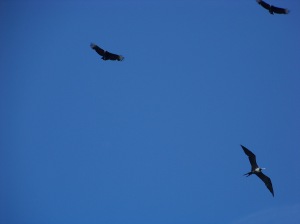 After a quick packing of suitcases and a checking of drawers etc. we checked out of the hotel. After a wait of some 15 minutes our car to the port turned up (early). Less than 10 minutes later we were there. Checking in went without a hitch and within 30 minutes we were on board and in our cabin. Our steward introduced himself and not surprisingly he looked Filipino. He mentioned that there was a buffet on Deck 9 and as Sue was keen to sample its delights, we set off in search. Around an hour later Sue read that afternoon tea was being served on Deck 5 and was keen to try that too. I am a little worried that Sue may have picked up a worm. 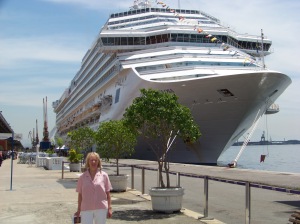 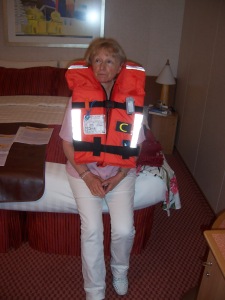 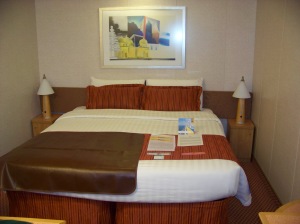 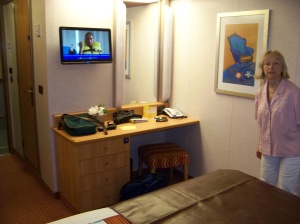 After a little further exploring of the ship, which included a tour of the exclusive Spa (need to take out a mortgage to participate in that) we attended the ‘Welcome Meeting’ for the English on board. I am afraid to say that sometimes I have been ashamed of being English. It might be an age thing, but when a meeting that should have lasted around 15 minutes with a slick presentation, ended up being 3/4 of an hour because several old gits (one woman in particular) couldn’t concentrate long enough to listen to what the presenter had JUST said, backed up by a HUGE screen with her script in HUGE letters printed all over it, AND we all had in our possession a sheet with ALL the relevant information, kept asking obvious inane questions to the Italian presenter, who was rapidly (like me) losing the will to live. Sue and I have agreed to jump overboard if she books onto any excursion we are on! For some reason the meeting reminded me of the many curriculum seminars I have attended in the past.

Afterwards, as a a bit of practice for when we next meet the lady, we had Lifeboat Drill. We put on our buoyancy jackets in the cabin (they call it a stateroom, but that is probably the condition it will get left in) and when the alarm sounded, made our way (calmly) to our correct station. Twenty minutes after being thoroughly drilled, we were back in our room getting changed for the evening meal.

The entertainment that night was in the Theatre and was excellent. It included some great dancing and a fantastic laser show. 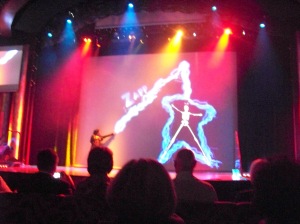