Rio Tres
Today we had decided to risk the buses again and see ‘Christ the Redeemer’ on top of Mount Corcorvado. You can see the statue from practically every location you visit, so it was time to see the gentleman in person.

We caught a bus with no difficulty, but unfortunately it was packed and we had to stand. It was the best ride you are ever likely to get on a roller coaster. The swerving and braking is down at high velocity and unless you hang on with grim determination, you will bruise. Fortunately after a couple of kilometers we managed to get seats and could enjoy the scenery rushing by. We soon arrived and as we got off the bus we overheard that the train up the mountain had an hour and half wait time. We have heard this technique before, many times, to encourage you to take a taxi or other modes of transport/guides. We went to the ticket office and booked a train, leaving in 40 minutes. To pass the time we walked across the road and visited a very large and newish Catholic church. It was quite sparse inside, but had interesting stain-glass windows. On return to the station we had a short wait and boarded the funicular. 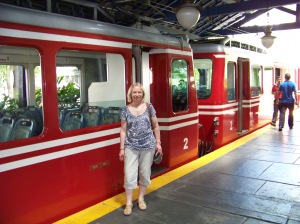 We were lucky as we had the front seats next to the driver, great view for videoing the journey, which is what I did. We chatted to a lady that was part of a cruise party that was on board the train. There were a few good vistas to see on the trip up, but the real treat came when we reached the top. 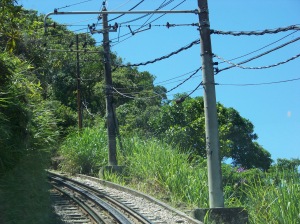 It was very busy, and it took quite a lot of angling to get our photos, but it had to be done. Sorry to the foreign lady whose foot I squashed, but you shouldn’t stand so close (no need to swear, I couldn’t understand). I had expected the iconic statue to be a bit of a disappointment, expected it to be rather tacky and showing wear around the edges. Not a bit of it. It is truly a beautiful sight to see and kept in immaculate condition. The views are equally spectacular and a definite must for any one visiting Rio. 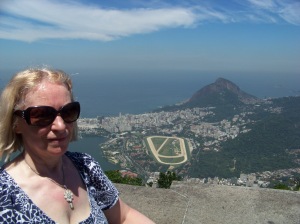 After taking numerous photos we had a rest in the cafe at the top with drinks, soaking up the views. The shade of the umbrella was nice. Refreshed, we queued for the return journey, it didn’t seem long as I haggled with a guy to buy a painting. He wouldn’t shift off his opening price despite my best efforts (even Sue chipped and the double attack usually seals the deal in our favour). However, I paid his price and then took a photo of him for Interpol. The journey down the mountain was not as swift as the mad dash back to Copacabana on the bus. 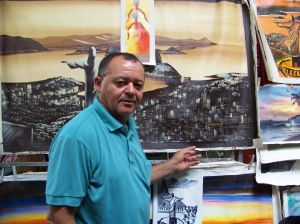 After a quick shower (to cool down again), we took out some cash from a cash machine then ambled down along the beach to the fort at one end, which guarded it from attack (the Spanish and French, I think). To gain entrance you have to pass through a small military camp at the bottom. It was a very steep climb to the top of the fort with quite a lot of moisture being shed from foreheads, even though being 4 pm, it was still quite hot. The summit gave the now obligatory splendid views, but as a surprise there was a fully restored Brazillian fort of around 1906 (cannons and all). After reading the few English information boards and taking lots of photos we set off back down at 5 pm (we heard a warning siren from down below). 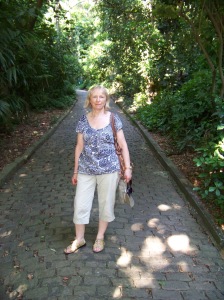 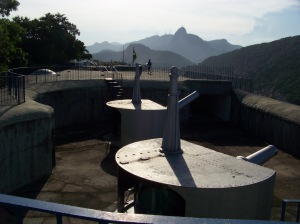 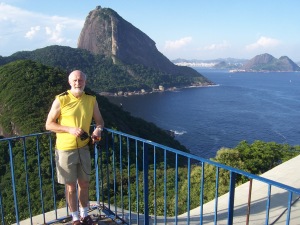 On leaving the camp, we stopped, had drinks and watched life on the beach from an elevated beach bar. We had brought the binoculars and these got used. As the sun slowly sank over ‘Christ the Redeemer’, we set off back to the hotel. We stopped on the way to watch a game of beach volleyball, and of course a game of beach footy.

After a brief stop at the hotel (again to cool off), we decided not to go up Sugar Loaf Mountain (as planned) and see Rio at night as the sky was flashing and we thought that they wouldn’t let the cable cars work. How lucky we were, later on while sat in a restaurant, the sky started behaving like a demented flash bulb and the heavens opened up. We watched with amusement as the street outside flooded and the pedestrians splashed their way through the maelstrom. We waited out the storm for over an hour (an excuse for drinks) and then dashed back to the hotel. Only a little damper.