The previous posts I have been writing on my Tablet Pc, but I had a problem copying it to WordPress, however I managed to solve that last night. This one is written directly to WordPress, as yet I still haven’t managed to embed any photos into the Blog !

Woke up early again!!! I had the pleasure of opening my birthday cards from the family and friends, Sue only once said ‘Happy Birthday’ and for that I thank her. I discover that on my return, the family are sending me on a ‘Murder Mystery’ dinner on a steam train. I and already looking forward to it. Though on reflection, that depends who gets murdered!

Today we had decided to Visit Jardim Botanico, though were unsure on how to get there. I now understand why Ayerton Senna was such a good racing driver, at one time he obviously drove a bus in Rio. I had decided to follow the advice from many websites that it was not worth hiring a car as the traffic is too difficult, the signage unreadable and taxis and buses are so cheap. We opted to join the locals and go by bus. What fun! The buses don’t seem to do anything less than 50mph in congested traffic, they weave maniacally from lane to lane. To catch a bus you stand at the stop, hopefully see the number on the bus from around half a mile away (any less and it will have gone passed), put one foot in the road (a very dangerous thing to do) and point at the driver, and then get out-of-the-way or you will die! The bus will swerve to the kerbside and brake from 50mph to a stop in less than 10 metres (I kid you not). We caught the right bus and survived the journey, the bus conductress was very nice and gave us the nod when we got to our destination.

It was a very hot day. We paid for our entrance ticket and then started meandering along the various paths through the gardens. It is on the edge of the Atlantico Rainforest so we were expecting to see monkeys and sure enough we found a couple scoffing some dates up a tree and dropping them onto us below. Later on while sitting in the shade in the cactus section we had a lizard join us for company, he obviously wanted food, he had a sweet little face and he tried hard, but he was unlucky, we Brits are going through a recession and we don’t do food runs to the 3rd world anymore. We took lots of photos and had a pleasant rest at the cafe where we had fresh fruit drinks to quench our thirst (no beer available). Afterwards we had a walk around the lake before taking on the bus drivers and finding our way back to the hotel (stopping off for necessary supplies, beer and water, at the supermarket). 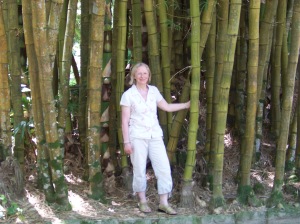 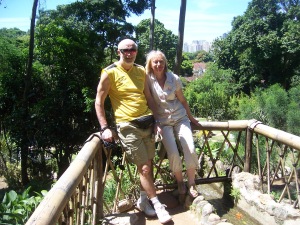 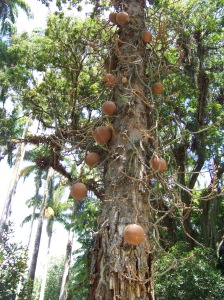 After a cooling shower we received a Skype call from Sarah, and then shortly afterwards from Charlotte. They both wished me a happy birthday.

Around 5pm we walked down to the beach and sat and watched the passers by, then had a dip in the sea ourselves. Considering how hot the day had been, it was not quite as warm as yesterday. However, the waves were fiercer and when you got caught by one it was like being tumbled around in a washing machine. Afterwards we dried off and counted the frigates and vultures in a procession high in the sky going somewhere out to sea. They did the same yesterday evening, we wondered where they were going. After we had dried off (Sue had naughtily brought a towel from the hotel!) we walked down the beach for a while before returning the towel to its proper place.

This evening we went back to the Mall for a meal, Sue chose hers quite quickly from the English menu brought specially for us by the waiter, (ironically) I couldn’t make my mind up but I really liked the dish photographed on the cover, so I asked the waiter for that. I don’t think it was a proper meal on the menu, but he took the menu into the kitchens and after 20 minutes an exact copy was placed on the table. It was delicious and very filling (a great choice).

Looking forward to tomorrow and being a day older, I knew I would get used to it with practice.