I have been out with the chainsaw again, this time with a dual purpose, the trees and bushes I felled along the river bank,  principally to make sure that any flood water made its way down river rather than collection debri and causing the water to back-up of course they have been chopped into handy logs (waste not want not). While  dropping a large willow tree that was choked with straw from the last flood I met the lady who lives across the road (and garden was flooded). We had a good chat about rainy issues etc. and she asked if I wouldn’t mind taking down the willow that grew on her side of the river. After completing some rather satisfying carnage my side of the river I popped over  and together we felled the offending willow. As it was starting to get dark and rather chilly I promised to return the following morning and finish the job, which I did (keeping the thicker logs for the fire). She Lives alone in the bungalow,  and doesn’t know anyone in Harborough, though her daughter lives in Sibbertoft. I promised that I would see if Doreen would pay her a visit to have a chat etc. They are of the same age and I think would get on well. By living next to the river they share at least one interest.

On the Thursday I met up with an old friend John Lee. W e had arranged to go for a walk near Hungarton. He had some excellent news, he had finished his treatment for prostrate cancer and the latest tests had  confirmed that he was now free of it. The walk was through some very beautiful countryside and the day though it had a frosty start, it turned out to be conducted under blue skies. We started and finished at the ‘Black Boy’ pub in Hungarton (yes, we did have a celebratory pint).

On Thursday morning Sarah rang. Her car wouldn’t start, the battery was flat. She didn’t feel confident enough to roll it down the hill and make a bump start so I reminded her that she had breakdown cover, with home start. They came out within half an hour and she was back on the road. She had been to Blackpool with Uni for a couple of days and the car had obviously been missing her and wanted to make a statement. A couple of days later, it failed to start again so Santa brought an early Christmas present via KwikFit.  The weather forecast for next week is very cold and snow and Sarah is now due back in Harborough next Saturday for the Christmas break. Fingers crossed the weathermen have got it wrong.

Friday, was Thai Night. Charlotte made a superb Thai chicken stir fry and I made Thai fish cakes, that though were not  very round, and a bit crumbly, tasted authentic (and I enjoyed them and Suraj had two). I also made a very large prawn curry that I think was also very good. It was decided that the meal reminded us of holidays in Thailand, praise indeed. Lucas had to miss his soccer training as he has got Impetigo. Ellis got rather tired during the evening  so he got one of the cushions, carefully placed it on the carpet, lay his head on it, wrapped himself up in his comfort blanket, and went to sleep, how sweet is that? That was the Rothwell’s cue to leave. Jamie took Nan back to her flat.

Jamie and I are great fans of Derren Brown and as a birthday present we are going to see him in Northampton, next April.

On Wednesday Sue and I travelled up to Yorkshire. I needed to drop a parcel off for David so that Genya could take it to Bulgaria (she was flying out on the Saturday), also drain the central heating system at Nan’s old house so that we wouldn’t have problems when the really cold weather arrived. We drove straight to the house to check that things were ok (and they were), before driving to Rotherham and the  ‘GetSorted’ unit to see Genya. We spent around 15 minutes with Genya, before leaving as she was very busy and we had to meet Sarah in Whiston for lunch. Luckily we both arrived at the pub at the same time. Lunch took about an hour and we successfully filled our daughter up with much needed sustenance, before we went back to Thurcroft and Sarah returned to Sheffield. Back at Nan’s I successfully drained the system, read the gas and electric meters while Sue attempted to keep warm in a cold house on a freezing cold day.

One evening, while in Bulgaria,  during our long chatting sessions David had told me about Donna Nook. It was where the grey seals come to give birth and it sounded quite interesting, so I resolved to go and see them. We had booked some accommodation at the Crown Inn in Saltfleet in Lincolnshire, which was close to the beach where the seals came ashore. The journey there wasn’t without incident, the SatNav kept shutting down and the weather deteriorated into snow showers. With a combination of good old-fashioned map reading (by Sue) and repeatedly switching the SatNav back on, we got to the right place.  On the way to the Pub we passed a sign saying ‘Donna Nook’, so we decided to have a look despite the fact that it was going dark and the snow had started again. Upon reaching the beach car park, not surprisingly we were alone. It had started to blizzard, but undeterred we put on our hats, coats, and gloves and ventured out of the car. It was worth it. Though we couldn’t see very far it was quite evident that there was a lot of seals about. The howling noise they made was quite spooky in the dark! 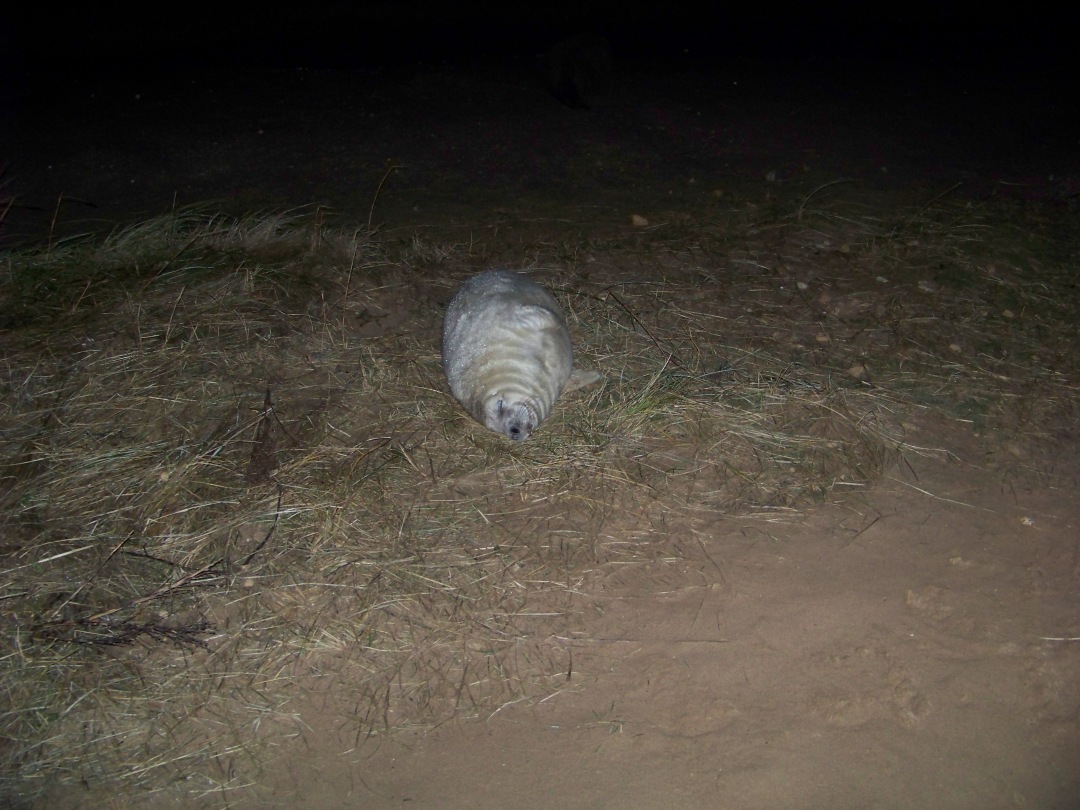 After around 20 minutes or so,  we headed back to the car and a bit of heat. Within 5 minutes of driving we had found the pub and parked in the car park. It wasn’t going to open until 6pm as the landlord and lady were returning from the theatre in Norwich and had forewarned us. We had a walk around the village and then found the beach (and a lot of caravans) before returning back to the pub just after 6pm, to find it all lit up and open. There was a nice warm fire lit and a menu provided for our perusal. After checking into our room and having quite a substantial meal, we settled down by the fire with some  drinks and chatted to our hosts. Quite a few other customers arrived for food and drinks on what was turning out to be a rather snowy night. Later on that evening we were invited to take part with the locals in some long alley skittling. It was tremendous fun. Sue and I were both paired up with locals (I with the landlady) and were victorious. Your truly taking first place and Sue coming second. Afterwards we retired to a nice cosy bed with snow gently drifting down outside.

After breakfast, we braved the icy conditions and drove back to Donna Nook (named after the Spanish Armada galleon ‘Donna’ that sunk off the coast there). In the daylight you could see that there were hundreds of seals scattered along the beach. There was also quite a few sight-seers (all wrapped up against the freezing conditions).  The pups had quite a novel call for their mother, it sounds exactly like ‘mum’, very weird to hear it. Quite a few of the big bulls were charging about protecting their territory, they can move as fast as you could run. Unfortunately we spotted a few baby seals that had died, by the look of it they had been squashed by the much bigger adults.  We spent a couple of very chilly hours there to see so many and be so close. There was quite a lot of information boards around that explained seal behaviour and also quite a few wardens that seemed very keen to talk. To help the Seal Society we bought a little cuddly seal for Ellis. 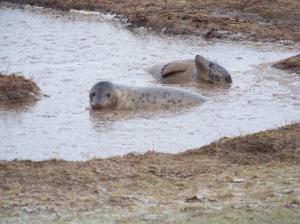 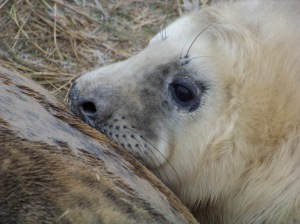 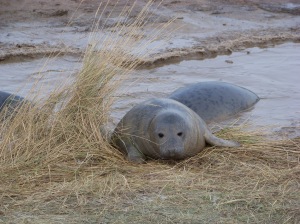 Rather frozen, we returned to the car and made our way to Mablethorpe. After a walk along the beach, through the town and then a meander around the street market, we found a fish restaurant and had a plate of the obligatory fish and chips. Luckily the establishment was as warm as its menu, which in the icy conditions was  very welcome. A brief but slippy walk back to the car helped burn up the enormous amount of calories we had just taken on board. 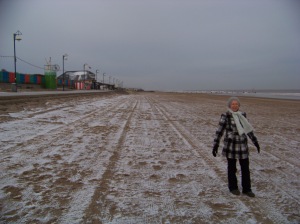 Mr SatNav  (after falling off the dash-board, with a quite a bang) behaved himself all the way home and got us back safely in time for tea and a hot bath.