Since returning from Bulgaria it seems to have rained most days. The ground is absolutely sodden to the state that it can’t absorb anymore water. Any rain that falls just lies on the surface and forms puddles. My daily bike rides have been such muddy affairs that  I avoid most of my favourite routes as the wheels get clogged with mud and make progress too hard work. For the first time in a long while I skidded on the slippy surface and came off, only to hit the ground with what I thought (in slow motion) was going to hurt, to find that the ground was so soft it was like landing on a pillow, the only damage done was loss of pride and the addition of a lot of brown mud.

Sue had told me that the river had been ‘up’ a few times while I was away, last week we had a few days where the rain did not stop falling at all and the river rose and rose until at 3am in the morning (yes, we were awake) it looked as if it was going to over top the bank. Listening to the radio it sounded like most of the country was under water already. I remember that way back last May, the Water boards announced that there was a water shortage and there was a hose-pipe ban. It doesn’t appear to have  stopped raining since that announcement.

The river level didn’t start to drop until the following evening and it took a further day to settle back into its proper bed! I took a walk through the fields around the farm Shop and most of them were under water as was a great deal of Welland Park.  Twenty cars or so parked down by the railway station got washed away and quite a lot of houses in the town were inundated. The weather forecast for the rest of the month is for freezing temperatures and possible snow.

Even though most days have been wet and miserable I have been out with the chainsaw felling trees and cutting logs into manageable sizes. Currently I have enough wood cut and stored away to last most of the winter, but there is wood out there that I have put the chainsaw to but not been able to retrieve as they have been under water (hope they haven’t floated away!) I will go and check on them some time later this week. There is a large sycamore on the river bank opposite the house, that I noticed was rotten. I will have to take it down soon as it will fall into the river and could block its flow, and there is the problem, the river is presently too deep for me to fell it. I meant to give it the chop during the summer but never managed to get around to it. We shall see.

Sue has been called a few time to work at Church Langton. There is a new Head who has been keen to cover to classes, but it seems that reality is starting to kick-in and he is finding it increasingly difficult to keep up with things. I think they should be called Managers now not Headteachers, you don’t need to have the ability to teach, only cope with paperwork.  We went on a council walk near Pitsford reservoir, the rain held off for once and it was nice to see everyone again. There were quite  few new additions to the group. We had an excellent lunch at the Swan in Holcot, I had the trout which was caught in the reservoir and it was really very good. The following week I took my mother there for lunch and we both had the trout, despite being a fussy eater she was very impressed.

It is that time of year when  international rugby becomes quite important to the planning of my days. The following day after returning from Bulgaria and went with Jim to watch the Maori All Blacks take on a Leicester Tigers side. We were treated to a thrilling game where the Maori’s lost there first game in 5 years. The rest of my viewing has been through the TV either at the Angels or the Rugby Club, but sadly not with the same success. England (though playing well) have not managed to beat any of the southern hemisphere sides they have played so far and they have the World Champions this weekend (could be painful).

Friday nights curry was changed recently to Bulgarian Night. I cooked a couple of Bulgarian dishes (Mish Mash and Gyuveche), that I had enjoyed over there. They didn’t taste quite the same, but I faithfully followed the recipes I found on the Net,  the family said they enjoyed them (not sure how true that was).  This week it is going to be Thai Night, Charlotte and I are cooking a dish each (she has been having lessons with a Thai friend).

On Monday the men in the family had a bonding session. Suraj and Jamie booked the day off work and despite the rain we drove to Daventry to have a go at off-road Segwaying. It was brilliant fun and a great laugh. I am afraid I was the first to fall off, gunning it across some rough ground, soon followed by Suraj who decided to fly over a little hillock without his machine  and then to finish it off Jamie got in a bit of a spin on his ,while desperately  trying to hang on. We must go again after Christmas.

Afterwards we had lunch at a new pub in Harborough before swinging our clubs at Corby driving range (the plan was to play golf but the course was shut due to being waterlogged). Unfortunately on Suraj’s first swing, he smashed his new carbon-fibre club. Though highly amusing Jamie and I didn’t laugh (much).

Afterwards we drove to Kettering and watched ‘At the end of duty’ at the cinema. It was documentary style film of two LA Cops, with a sad ending, but worth seeing.

Sarah has been to visit Lee a couple of times over the last two weeks and also managed to complete two essays (they don’t have to be in until February). She has been enjoying doing a spot of mentoring to some youthful criminals and she has joined a panel who monitor domestic disputes etc.  She is looking forward to going to Blackpool with friends from Uni (not sure when). Nan and I did go up to Thurcroft last week and stayed overnight. We went to check on the house and visit a few people. The house was as we left it around 2 months ago. We visited Nicky to see how her pregnancy was getting on (11 weeks to go) before driving over through the floods to Braithwell to pay Nan’s gardener (Harry) for mowing the lawn. From there we went to see Aunt Edna. Surprisingly, despite having a stroke the last time we saw her, she was much livelier and though her speech was a little slurred, her memory seemed much improved. We stayed about an hour and a half and left to see Sarah as Edna had her tea ready. We picked Sarah up and fed her at a very nice Pub that had very reasonable prices before student food shopping in Morrisons (£53!!!).

During the last few weeks Suraj an I have been to the cinema to see a couple of films. I enjoyed ‘Looper’ and despite having to listen to an annoying trailer of it each half hour on the Bulgarian radio station that I listened to while being in Bulgaria (and promising David never to watch it), I found that ‘Skyfall’ was excellent. Much better than any of the previous Bond movies and well worth a visit. 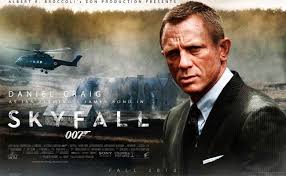 In a coincidence, last week I helped Jamie change a tyre on his car as he had picked up a puncture and later in the day I took my car to the garage to get a tyre repaired that had a slow puncture. Spooky!