Friday night was Quiet Night. Nan, Jamie and Sarah were all in their own flats/apartments. The Rothwells were celebrating Lucas’s birthday with a  tenpin bowling party in Kettering with school friends and the next door neighbours from back in Newark. That left Sue and I on our own. I made Thai fish cakes, scampi and chips for tea, opened a bottle of red wine, ignored the fact that it was late night shopping in Harborough (toooooooo cold outside), switched on the TV and watched a programme about a Russian landing strip built to last just a couple of months at the North Pole for tourists and explorers. Easy viewing.

On Saturday afternoon, Sue and I attended the Rugby Club Christmas Luncheon. It was a chance to meet with friends, have a chat and enjoy some good food. After the meal Harborough were playing Lutterworth in a league fixture. Most of the ladies left at this point so that the gentlemen could concentrate on rugby issues and jovially taunt the opposition supporters from past the M1. Harborough hadn’t won this fixture for the last 3 meetings, but on this occasion the home side were worthy winners. Instead of joining in with the  festivities I left to walk home as Sue and I were watching ‘Brave’  later that evening at the Cinema Club. It was a Pixar animated film that I think Sue enjoyed more than I.

Sunday saw the Rothwells travel to Wellingborough to see Father Christmas and his reindeer. Afterwards, Nan, Sue, Jamie and I paid them a visit to see the birthday boy Lucas. Sarah rang while we were there and told us that she had spent a chilly and windy afternoon at the Lady Bower Reservoir with Lee.

We have been having frosts each night this week, so the woodburner has been lit late in the afternoons and by evening time the lounge has been nice and toasty. During the mornings I have been spending an hour or so at the allotment turning the soil over in preparation for the spring. I find that my clay soil is easier to dig when the ground is frozen. It is now all dug and the only visits will be to pick the leeks, parsnips and beetroot that are left. During the afternoons I have been adding to my stockpile of wood (it gets quite addictive), though Tuesday my chopping was disturbed by an unexpected visit from Nicky and Dawn (from Thurcroft). They had come for a couple of hours to visit Nan and bring some presents. They popped around for 15 minutes on their way home. Afterwards I drove Nan to Farndon Fields school for their Infant Christmas Production. In the past,  the school PTA provided transport for the Senior Citizens to attend, but  they have to make their own way there now (how times change). When I picked her up afterwards, she was full of it and had clearly been entertained (and fed).

On Tuesday Charlotte and Ellis came for a morning visit. Charlotte was having her hair done in town and Sue took Ellis to the Library for ‘Wriggly Bums’ ( a story telling session). Unfortunately the library was closed for updating so they went shopping instead. It has been customary for Charlotte and Ellis to visit Nan on Tuesday afternoons and have lunch, when Charlotte returned, that’s where they went.

After a very frosty Wednesday night (-5) , the following morning I drove up to Braunston-in-Rutland and met John Lee for a quite chilly and invigorating walk. For the first hour we couldn’t see much of the scenery as the mist was quite thick, but later on, though the temperature never crept above freezing, it got quite sunny. Some of the hoar-frost was quite  spectacular, the photo of me next to the hedge was quite weird as when you looked at the hedge an optical illusion stopped your eyes from focusing (never seen that before, so early in the day!). We had Lunch in the Old Plough before we returned home. 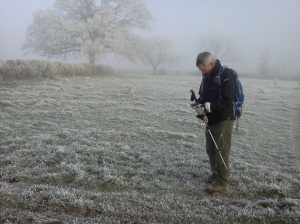 Friday was a horribly wet and miserable day but finished with a lovely surprise. Suraj was attending his work’s ‘Christmas Do’ at Wicksteed Park during the evening so wasn’t present for ‘Curry Night’ (chicken Korma & Dupiaza), after we had eaten and were sitting in the lounge entertaining the boys, in walked Sarah. She had braved the awful weather conditions and busy motorway traffic to journey home.

The following morning, as I now do not possess an estate car,  Sarah and I walked through the fields to the Farm Shop and chose our Christmas tree, then carried it on our shoulders back (with quite a few stops for rests). Nan had rung earlier and told me that she had run out of tablets, so I had rung the surgery and was passed onto the ‘out of hours’ service who had promised to ring back. On our return a Doctor did ring, but wouldn’t speak to me so was given Nan’s number. However, she had now gone shopping and wasn’t answering the phone. A rather disgruntled practitioner rang us again. Luckily, Sarah was now with Nan so we gave him her mobile number and the upshot was that tablets were picked up from the chemist by the both of them later. Usefully we found out that there was a service at Huntingdon Gardens where Nan can drop off her prescription and it will be processed and delivered each Friday, that should solve any future problems.

As I was erecting the tree in the lounge the Rothwells arrived. They were going to Foxton Locks as they were being drained for maintenance and wanted to see it. They waited for Sarah to came back from Nan’s then set off.  Just as they left Jamie arrived with a large amount of meat which filled up our freezer, he had been working that morning and unlike earlier in the week when he was stuck on the motorway in Birmingham for 7 hours due to a lorry fire, he was looking forward to a shower and going out. I put the lights on the tree then left to watch some rugby at the club, stopping on the way to put up Nan’s tree in her Flat. That afternoon Charlotte, Sarah and the boys dressed the tree in readiness for the coming festivities.