One of the Brits who owns a house in the village arrived on Saturday and as predicted by David the weather changed for the worse when they arrived. It appears that they come several times each year and when they do the weather responds appropriately. Prior to their arrival we were having hot sunny days and beautiful orange sunsets and mild starry nights. It rained on Saturday evening as they arrived, it rained in the morning on Sunday and today it has tipped it down in the afternoon with cloud down to ground level. The grind of concreting around the pool is nearly complete and we have at last started to re-tile the walk-way.

Re-Tiling: We started this on Friday morning. Like good workmen we discussed how we were going to do it during the morning and by 4pm we were still no further into solving how it was going to be done other than we had drawn a line where we would eventually start and we were nearly agreed on which direction we would go. As it was then likely to get dark before we got the tools etc. out we moved into the barn and completed digging a hole for one of the new pillars to strengthen the beams.

On Saturday we went to Vittoria Tarnovo to find some tiles that would match the ones we had broken. David spotted 8 similar tiles in a Builder’s Merchant’s Yard just outside VT, but they were shut. We visited quite a few DIY outlets, but only managed to buy 4 nuts to replace the 2 that had fallen off the Stihl chainsaw (when I was using it). David nearly bought a UPS for the central heating, but he did buy a jacket for Banjo in readiness for the cold weather. We returned empty tileless and in the dark. 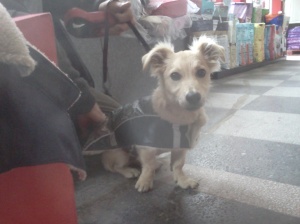 On the Sunday we started early, laid out the tiles, mixed the mortar, had a few more discussions and then attempted to lay the first six. We broke two. None would stay level or in line. By lunchtime and several liftings up and re-laying we were thoroughly despondent. After lunch we again tried a few more new ideas and got further depressed. Luckily, the British visitors arrived for a ‘Hello’ and a ‘What are you up to? Of course their arrival heralded the start of the rain which stopped any further tiling and a now probable suicide pact.We replaced the chains on the chainsaws instead, before calling it a day.

Today (Monday), we again started early (even before either of us had visited the loo, it was that worrying). A sloppy mix and a tile at a time, with a redefinition of the word ‘crap’ was the chosen way ahead.The sloppy mortar and single tile laying proved a partial success, but the re-definition of the concept of ‘crap’ to ‘acceptable’ was hugely successful. We discovered that life became infinitely easier without using a spirit level. Things which appeared misaligned, were now just a point of view,when standing further away or from the other side, armed with our new definition of ‘acceptable’, it all looked  pretty good. With further refinement of the placement of mortar from a central pyramid, to four corner blobs, and then eventually two parallel lines, we had a method that we could control the height of the tile in all directions. After a couple of rows ‘superbly laid’ (to our new definition structure) we broke for lunch (10 egg omelette ). Keen and eager to return to our work, a barrow load of ‘perfectly engineered’ mortar was mixed , and we both set about the task of ‘precisely laying’ a huge quantity of tiles. After just a couple of rows, the rain came and we retired to the barn and cleaned some of the old tiles. When the rain went we set about our task again. Not many more rows were in situ before Milen and a friend turned up to discuss Bulgarian matters. As they left the skies opened up and we stopped for the day. Who said tiling was difficult? The trick  is realising that it is just a state of mind, I think we might just apply that concept to some of our other jobs, the Bulgarians do!

Concreting around the pool has been quite a task and taken up most of our days, though we did go to the Market in Dryanovo to look for chainsaw nuts. David came away with 3 pairs of socks, a pair of second-hand work trousers, two bunches of leeks (one turned out to be spring onions) and a bag of onion sets. I bought a kilo of walnuts as my morning walk with banjo hunting for them off the local trees is getting evermore fruitless and the last couple of days have yielded just 2. The black Bulgarian squirrel is much better at finding them than my sandy Bulgarian walnut hound. The leeks were planted in the garden the following day, in readiness for the spring, the same will happen to the onions (sometime).

The other evening, whilst laying on the bed listening to Radio 4 on my Android phone, I was disturbed by David smashing a large hole in a wall outside my room. He had decided in some extra-curricular (and wisely chosen not to involve me). Any hope of a brief snooze was dashed! I await my revenge when he decides to have a quite moment or two to himself, and I think I may chainsaw the tree opposite his bedroom.

The last few evenings (after dinner)we have started to work our way through the ‘Lord of the Rings’ trilogy on TV, we have decided to follow it up by tackling the ‘Harry Potter’ series. Our evening meals have not always been a resounding success. Last week I made a curry from what I thought was a nice pack of frozen chicken pieces. When they were defrosted it contained regular lumps of what I assumed were of the finest cuts. They certainly fried well, but when the rice and curry was added it did seem to contain rather a lot of oil. Upon eating, the whole meal tasted of absolutely nothing (despite being heavily curried), and left a sickly greasy feeling inside the mouth. After very close inspection I recognised the chicken pieces as ‘parson’s noses’, or chicken ‘bums’ was my explanation to David. Two plates of chicken curry was scraped into Banjo’s dish. He descended on the feast with gusto and after one mouthful slunk away in disgust, it went in the bin. We had rice pudding.

During the week, the electricity went off for most of the day (it stopped us concreting). We had a visit from another resident in the village checking whether our power was on, he was from Doncaster and though he had owned one of the houses for the last 9 years, it was his first visit in 4 years. He was checking on how it was and was leaving on Saturday. We gathered that he ran a business of some sort in the UK and it wasn’t doing very well. He was contemplating moving to Bulgaria permanently. He seemed a rather embittered fellow and nether of us cared much for him, if he does move over here I don’t think David will be having much to do with him.

Charlotte: Lucas has informed her that she is now old and wrinkly.

Sarah: Is friends with ducks, and will be going home for Halloween.

Jamie: Has fallen out with Harley again.

Nan: Is enjoying life in Harborough, but annoyed that she was billed for the warden service at her place.

Sue: Is still busy picking vegetables and went out for lunch with Nan. Though it appears to be cold back in the UK, she has yet to make a fire or put the central heating on.