Visiting David means working on several projects that he has thought up over the summer. Sorting out the collapsed walk ways around the pool is priority, followed by finishing the barn roof that was erected by a couple of Bulgarians, then replacing the kitchen ceiling which part has fallen down. In the past it has been difficult to keep David focused on the more important tasks that need to be done, he is guilty of wandering off at a tangent and forgetting the purpose of me being here.  This year he has been much better and our discussions on planing what needs to be done next to achieve the goal of completing the task have been a much less frustrating affair. On the few occasions we have not been able to work on the pool, we have been able to make a start on the barn. In the past we would have jumped randomly between all the tasks and even attempt to start some others. The pool is taking some serious concreting as we are determined to ensure that it will not slip, slide or collapse again in our lifetime. On the few occasions we have moved on to work on the barn because of rain or more usually waiting for concrete to go off or materials to arrive from the builder’s merchant, we have discovered a lot of remedial work that needs to be done before the winter (more on that later).

The pool: Initially, I thought this would take about a week, but as we discover the shoddy workmanship as we peel back the layers a better estimate would be 3 weeks, but we shall see. Where we were expecting to see concrete, we found something called ‘sippet’, which is material not unlike crushed breeze blocks, that is used under the pool tiles. When you water it , it apparently goes hard (it obviously didn’t). The builders started to use concrete (as they should) but then changes to the much easier to lay ‘sippet’ for most of the tiled surface. The bits that were concreted (to depth of 2 inches) have slipped very little, but where there is ‘sippet’ the movement as been as much as 12 inches.  There is no way of knowing what is under the surface until you take the tiles off, except when it is concrete the tiles often break and on ‘sippet’ they do not.

We discovered that where the skimmer takes the overflow away from the pool and returns it to the pump it was not in its own housing, it had been covered in compacted soil and overlaid with concrete. How you were to fix it if it ever went wrong (and it does leak) is anybody’s guess. We had to dig it out and make a culvert for it (we have yet to work out what removable cover is going over it). The foundation for the pool walkway is only 2-3 inches at most, we have been putting in footings of 6 inches, battens of 8 inches and then a layer of metal reinforced concrete of 4 inches. We have yet to finish or relay the tiles. Whilst digging out one side of the pool walk way we broke through into a well. The builders had put several stones over it and left it. After a discussion, we decided to cap it in concrete as we couldn’t see the bottom and would take too much time and material to fill it first. Besides, David thought he might make it into a garden feature next to the pool at a later date (when I am not there). Other than finding gaping chasms between the various layer of material, which we fill with concrete, we are making many rodents, lizards and snakes homeless by taking there homes away from them. 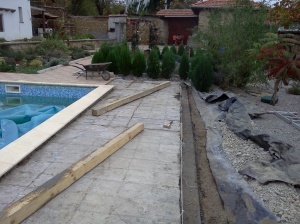 The barn: There is no doubt that Bulgarian workers are cheap, they earn around 25 Levs a day, which David pays 30 Levs (around 2 Levs to the £1).  I remember an old phrase, “If you pay peanuts, you get monkeys.” The main problem we have with the workers that David employs is that nothing is a problem, until they actually start something.The barn had been apparently finished, yet the roof tiles had not been cut in half on the alternate rows and hung over the edge (we cut them off). Two of the cross beams were not sufficiently supported and were bending alarmingly, we put supports under them. The base of the wooden pillars hadn’t been concreted in to prevent movement, we concreted them. The roof was supported on one side by short pillars on top of a stone and mud wall , we strengthened and concreted them. There are still a couple of roof supports that we intend to replace as instead of being one complete piece of wood there two separate pieces apparently balanced on top of each other. We have also to board the back of the barn and build up the supporting walls to the same height, put in some guttering and lay the down pipes into the drains, plus wire in some lighting and sockets. 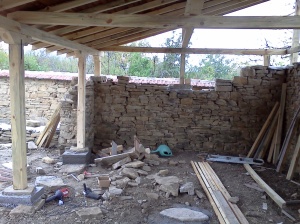 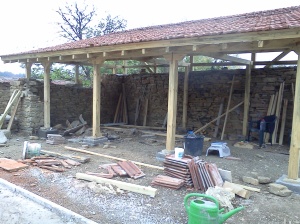 The kitchen ceiling: We have yet to do anything with this other than chat about what can be done. The present solution is to rip down all  the ceiling and because there is concrete behind, we intend to use expanding bolts to fix beams to it then fix insulation board between the beams (probably use raw plugs and screws to fix these, then plaster over the top of that. It should look quite rustic. We shall see what happens.

The days have been busy, up at 8am, working by 9am, finishing at 7pm for our evening meal. Lunch has usually been a salad (mainly from the garden) and the evening meal being a variety of things that I think I can make. Apart from visits to the Builder’s Merchant in Dryanovo for materials we have only been out a few times, and that is for a meal in the evening. The fair arrived in Dryanovo this week and on Thursday we ate at the Sporting Hotel next to the fair. David parked among the side stalls. The meal took a couple of hours and when we returned to the car all the stalls had closed except the one across the road for the car. As we started the car to move off, a Bulgarian tapped on the side window and told us we had a flat tyre (which we had) and gestured to the side of the pavement saying it was sharp. I thought that is odd, the flat tyre was on the road side. David had an electric pump, and in a couple of minutes (observed by the stall holders) the tyre was inflated. While I was watching I noticed that one of our tyres was over a cable the led to the open stall. I worked out that they couldn’t close for the night like the other stall holders as they couldn’t roll up their electricity supply until we had moved. Strangely our flat tyre wasn’t flat the following morning!

During the week David had a visit from a couple that he knew who were British. They told him they had come upon hard times and were going back to the UK and did he want to buy their car (on questioning it turned out to be on hire purchase), and could he lend them money for their flights home. They left empty hand but with a carrier bag full of ripe tomatoes out the garden. What a cheek.

The weather has been mostly kind to us, the evenings have been warm and because we are so far away from the electric lights of civilisation, the stars at night are superb  the Milky Way can clearly be seen. I love to lie in bed looking at the passing aircraft crossing the spangled darkness and listening to the jackals calling to each other in the distance. Banjo has been a delight. He is full of fun. Each morning I take him for a walk and we hunt for walnuts under the trees in the surrounding area. When both pockets are full we come back and a sit outside the kitchen, crack them open and I share them with him. I am not sure if they are good for him , but he like me loves them and can’t get enough. It has been getting progressively harder to find the walnuts, and we have to roam ever further, annoyingly when I find what should be a good tree there are little piles of opened shells underneath, I wonder what squirrel tastes like?

I keep in touch with the rest of the family and friends through email, Facebook and Skype. Here is their news:

Sue: She has been baby sitting for Charlotte while she and Suraj attended Lucas’s Parents Evening. Luckily he got a good report. She went to the Harborough cinema and enjoyed the film, though she forgot to say which it was. She has started to pick the white grapes and turn them into juice and also she has started to freeze the sweetcorn as they have started to turn yellow. She visited Bigette and Jim during the week as well as have lunch with Nan and call to see next door neighbour Doreen.

Sarah:  Sarah is going to Alton Towers with friends from Uni, and on Friday she went to Skegness with Lee. We have chatted a couple of times on Skype, and I think she is getting a little bored with her Uni work and is keen to get on with some research that she needs to do for her assignments. One of her flatmates has been ill and she has been a Florence Nightingale and been looking after them.

Jamie: Not heard anything from Jamie recently other than he brought round 32 chops for Sue( I know what she will be eating for a couple of weeks). Last week, he Charlotte and Sarah went collecting chestnuts near Foxton, though I believe they weren’t ready.,

Charlotte: Had a massage and facial. She helped sort out Nan’s  Care Warden costs with the Council and