It has been a couple of weeks since the last time I put finger to keyboard and reported on family goings on. Things have been happening at such a rate that I haven’t had a chance to spend time on the computer. Here is what I can remember:

On the health front I have managed to attend 2 hospital appointments for scans and general pokings about and still no answers. I have given blood samples twice but not yet had the results of those. I have been given another appointment for yet another scan in July (not much left to look at), though I have been prescribed some medication. The tablets (after looking them up on the internet) are for depression. Bit of a surprise there, I think they are running out of ideas.  I took one and it made me tired, but as you have to avoid alcohol and I have had to  be VERY on the ball,  I haven’t taken any more.

I drove back up to Thurcroft and brought Nan back to celebrate her birthday. She reads my blog so I won’t mention numbers. Jamie invited us over for a cup of tea one afternoon and when we arrived, Harley was busy doing her coursework and Jamie was cleaning his bathroom (very domesticated).

As  a birthday treat, Nan and I spent the day in Canterbury. We travelled down a special train that left Harborough at 7.15am and arrived back at 10.45pm (a long day). We travelled First Class and were treated to coffee, pastries and scones with fresh cream and strawberry jam. The scenery down was quite delightful though it was raining when we arrived. We decided to find a pub and have lunch (which Charlotte had paid for) and see the rain off. It had stopped by the time we ventured out, though rashly we decided to have a boat ride on the river and it hammered it down! 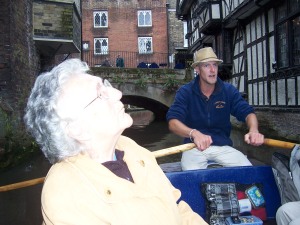 The trip was aborted as the rowing boat started to fill with water. Canterbury was heaving with French school children, who were loud and everywhere.

We visited the cathedral. Though I am not a fan of such buildings it was very impressive and I would have liked to have spent more time there.  It just shows you what British craftsmen can achieve when the local vicar wants a building job done.

As we had done quite a lot of walking and it was still raining, we decided to have hot chocolate in cafe in one of the rather quaint little streets that are all around the big church. It was needed and gave our feet a deserved rest.

We then had a little look around some of the many Charity shops to be found there. Yes, it was still raining. When we had exhausted those, we surrendered and popped into a pub until it was time to walk back to the train.

It left on time and though it rained most of the journey back the return route passed under the White Cliffs of Dover and through the Port of Dover.

We were sharing our seating with a couple from Husbands Bosworth. They appeared quite nice and engaged us in conversation when they weren’t eating (which was most of the time).

In between the gaps when the stewards weren’t providing us with food, packets of sandwiches and boxes of rolls and cakes appeared from under the table and from the locker overhead. They didn’t offer to share. They were quite large.

On Friday, Sue and I managed one of the Harborough council walks. The distance was only 6 miles, but it traced a route that Michael Woods had walked during his making of the BBC programme ‘The Story of England‘, which was based on Kibworth.

It was a lovely day, though we did have a very heavy shower half way through. We met one of our old neighbours when we lived in Little Bowden, he had serviced both our cars a month ago. He told us that they were the last cars he had done before he had retired (we have that effect on people).

I spent one splendid day being bussed around the Welland Valley. I and a couple of friends had been meaning to got to the annual Welland Valley Beer Festival for quite a few years, but things seemed to get in the way.

The weather was perfect, the participating pubs were numerous and the buses that transported you between them were vintage. Everything was organised like clockwork, and we managed to sample quite a lot of ales with ease. It was a perfect day (a good name for a song title).

One Sunday, Sue and I had lunch at Joules.

A band that I follow were playing: East West. The weather was awful, continuous rain and cold. However, we were indoors and the food and entertainment passed a very nice afternoon.

SARAH: Sarah has been studying for her exams. She has been revising every day, making notes, drawing diagrams and avoiding any distractions. You will note that she is not mentioned in any of the previous activities. She has been ensconced in her room or on the study computer revising! This last week both she and I have been putting in 15 hour days in going over her coursework. We have started around 6.30am and finish around 9.30pm, with short breaks for food. I am extremely proud of the effort and dedication she has shown to put herself through a process that appears  to me to be tortuous. I am in awe of the quantity of information she has taken in and can recite (I couldn’t do it). Facts and figures come rolling out at the mention of a topic. I am ashamed to say that when we reversed roles and she tested me on the curriculum we had learnt together, I was rubbish. Today she finished her last exam and we went with Nan for a Thai meal to celebrate. Fingers crossed now.

The pigeons who made their home in our apple tree last year and raised three young, stayed with us all through the harsh winter and again this year laid 2 eggs. The photo shows their 2 chicks (about 10 days old), they grow very quickly. Sarah has spotted another nest with chicks in the tree opposite her bedroom. We think they are last years chicks as they are very tame and don’t fly away.

Last Sunday was Father’s Day. As Sarah and I were right in the middle of revising I wasn’t expecting it to be a very memorable day. However, Charlotte invited us over for Sunday lunch. Jamie did the  starter (sardines from Sainsbury’s) and Charlotte cooked a lovely chicken dinner for 9 of us (no mean feat!). Sarah and I had to leave after we had eaten as revision of Sociology beckoned, the exam was in the morning. Sue and Nan had a lift home from Charlotte later in the afternoon as Sarah had driven us to Rothwell.