On Sunday night I took Nan back to Thurcroft. The weather during her stay had been rather chilly due to an incessant wind that started when she arrived and didn’t abate until I took her back. I am not sure if there was any link between the two, but it restricted the outings in her bat-mobile and I think she was getting a little bored with all the reading she was doing. I returned the following morning as I had a meeting with the Rugby Club’s website co-ordinator.

On the return journey I met Sue at Fosse Park in Leicester and we trudged (in the rain) from furniture store to furniture store to choose a new 3 piece suite. We didn’t agree on one that we both liked so we drove into Harborough and looked at some in a new store that had opened there. We left empty handed.

That evening I drove over to the other side of Harborough for my meeting. I needn’t have bothered, he has a reputation for being a bit slack and I guessed he would forget, and he did. We rescheduled for Wednesday and that meeting he remembered (must have been something I said).

On Tuesday I let the engineer into Jamie’s apartment to replace the Fire alarm. He tested it and everything worked, fingers crossed. As it was such a lovely day, Sue, Sarah, Charlotte and children went to Foxton Locks. They had a good wander around saw some cygnets and reported that it was quite busy.

Sarah spent the week revising and it was half-term.

On Wednesday Sue and Charlotte went shopping and looked at furniture.

On Thursday morning I planted my butter beans and in the afternoon I had a meeting with Greene King (Brewery) and discussed the contract and sponsorship deal they were offering for the Rugby Club. Sue ordered a 3 piece suite from the first store that we had been to on Monday. I am not saying anything.

On Friday Sue took Charlotte and the grandchildren to Hammerton Zoo, and by all accounts they had a lovely day. I stayed at home as the furniture was arriving and I also had a hospital appointment in the afternoon. The delivery happened on time and yet another scan on another bit of me failed to find the problem. I put the old suite on the patio and no doubt will have to pay the Council to take it away. Charlotte and the children stayed for Curry Night, but Suraj was working late putting in a new server at work. Sarah went to Lee’s on the train to attend a Hen Night. 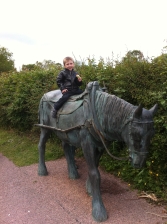 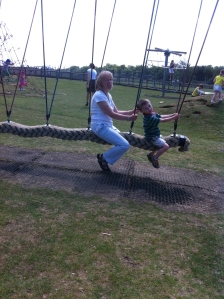 On Saturday I was watching the Saxons v USA when Sue sent me a text saying Jamie’s car was on fire and then immediately Jamie rang asking for a tow. I ascertained what had happened. He was parking his car in his own parking spot at the apartments and the post that flips up to prevent other people parking in it, flipped up. It took out the oil coolant radiator he had fitted. The smoke (fire) was the oil spraying onto the manifold. As I was drinking beer I pointed out that I couldn’t drive and give him a tow to our house. I told him to leave it there and we would sort it out on Sunday. When I got home later, it was on the driveway. One of his mates had given him a tow. As Sue was on a roll buying furniture, she had decided that her computer chair was too old and that afternoon she had been to the store in Harborough and purchased a new one. It was proudly sitting in the corner of the lounge.

Sunday saw me clear out all the oil in the inspection pit from the last time Jamie had serviced his car, so we would be ready to fix his problem. He arrived at 11am and by 12 o’clock we had fixed it. We drove over to Halfords to pick up some more oil and collected Harley on the way back. They had Sunday lunch with us and then left. Sarah arrived back from Nottingham and went straight to bed. Must have been a good Hen Night! I painted the fence during the afternoon.