26/04/21 UK Deaths: 6. Harborough Infected: 10. The European Commission is taking legal action against AstraZeneca, accusing the firm of failing to respect its Covid-19 vaccine contract. Criminally pointless, this action is about saving face and not saving lives, the only lesson learnt by pharmaceutical companies will be to not accept any future contracts with the EU promising anything more than the bare minimum.

After a 4.5 hour walk to Foxton and back with my two little chums, Rocky and Nala were picked up late in the afternoon by Jamie and returned home.

27/04/21 UK Deaths: 17. Harborough Infected: 11. Pentagon scientists claim to have invented a sensor that once inserted under the skin will detect if the patient develops Covid-19. And they have also developed a revolutionary filter that can remove the virus from the patient’s blood through a dialysis machine. Potentially a life-saving initiative that I hope becomes universally available.

On a much chillier day than of late Sue and I opted for a 6.7-mile walk, starting from Jamie’s house in Desborough and taking in Stoke Albany. Yesterday, Jamie had neglected to collect the dog’s blanket when he picked them up, so parking up in front of Jamie’s garage we let ourselves into the house and returned their comforter. 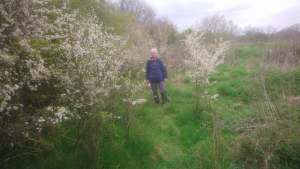 It took a while to find our way out of the large Grange Estate tacked on to the edge of Desborough, a rather cheeky homeowner who had blocked the OS pathway with a 6ft panelled fence. However, after a bit of head-scratching and checking of the GPS, the problem was eventually solved and we began our ramble in earnest. Our route took us north through the long decommissioned RAF Desborough Airfield, closed in 1946 and used during WW2 as a Royal Air Force Bomber Command base, then onto Stoke Albany House, built-in 1835 and now open under the Open Garden Scheme. Though there was plenty of evidence of its past, the scenery along the old pot-holed runway was decidedly uninteresting, even the warbling of a lofty skylark couldn’t improve the straight drag along the vast expanse of concrete. It was a relief to descend from its elevated runway through gently sloping grassy fields, yet even here, due to a prolonged dry spell, the surface was treacherously rutted with a variety of animal hoof depressions, making the going very wearing on the ankles.

Entering into the grounds around Stoke Albany House by way of a stile and large badger sett, gave some respite to sore feet and encouraged us to stand and ogle awhile at this fairly impressive country residence. As Sue remarked, “Look at all those windows, they must be a devil to keep clean.” I agreed and backed it up with, “And it must be a nightmare to dust, think of all those spider webs.” We agreed to take it off our list of aspire-to properties.

Leaving the tiny medieval hamlet of Stoke Albany, we joined the Jurassic Way (a national footpath). Our route now took us south through undulating farmland and bluebell woods, clearly influenced by and accommodating the local Hunt and pheasant shoots. We returned to Desborough by way of the large modern industrial estate located on its outskirts, before plunging into the maze of The Grange and a meandering passage back to the car.

Charlotte arrived in the late afternoon, accompanied by her friend Sarah. I gave them a hand to fill Sarah’s car with wood-chip from the Council heap. Later, I rotavated the raised vegetable beds in the garden and transplanted four rows of lettuce. They should be hardy enough to tolerate any late frosts.

28/04/21 UK Deaths: 29. Harborough Infected: 11. The UK has secured an extra 60 million Pfizer vaccine doses to roll them out as part of a booster campaign in the autumn.

While Sue embarked on one of her U3A rambles to Stonton Wyville I spent the day nurturing vegetables in the veggie plot.

Today is Joey’s birthday and luckily for him, his teacher has been tracked and traced and is isolating so Joey has the week off school! Must be the best birthday present ever.

Sue went with the U3A Nature group to Southwick Woods and Short Wood near Oundle. It was another chilly day, undaunted they came across carpets of bluebells,  some rare orchids and a parakeet too. Again, I spent the day in the vegetable patch sowing the first carrots and beetroot.

30/04/21 UK Deaths: 15. Harborough Infected: 14. On my return from town today I noticed a nurse kitting up in full PPE outside one of our neighbour’s houses. Their son Ben had returned after an operation in hospital. Aftercare has become so much more difficult under a pandemic, I used to work with his mother Terry at Farndon Fields school, I hope he recovers well.

This morning we had an early start to the day with a drive to Leicester General Hospital for an injection of Lucentis to treat my left eye. We arrived 15 minutes early for an 8.30 am appointment, as the first patient I was seen straight away and treated before half-past. Amazingly we were back home by 9.15 am! To rest my eye I went back to bed until midday. 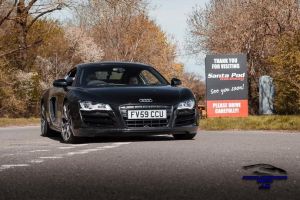 Our next-door neighbours Mike and Clair informed us during the week that they are replacing the fence between our properties and I promised to give him a hand. However, unfortunately, he decided to start work during the afternoon, I explained that I wouldn’t be able to do anything physical for the next 24 hrs, but I expertly supervised while he removed two of the fence panels.

During the evening we treated ourselves to an excellent Chinese takeaway and watched the film ‘The White Tiger‘, a fascinating story similar to ‘Slumdog Millionaire’.

Jamie had another attempt at beating his previous time in the R8 at Santa Pod Raceway. 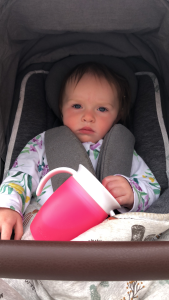 The day began with yet another chilly 5.30 am start for Sue to attend Saddington car-boot sale. I rose a couple of hours later to pot on some sweetcorn and sow a few more to compensate for a rather disappointing germination rate. Soon after returning from practising her bargaining skills, Sue took a call from Lee informing us that Alice had been taken into hospital by ambulance after a temperature of 39°C and a rash appearing on her legs and arms. Sarah had gone into hospital with her, but due to Covid restrictions Lee could not, he kept Sue and me up to date with news. Thankfully she was discharged during the afternoon after being diagnosed with a viral chest infection. What a relief!

Late in the afternoon, we had a visit from Jamie and Ruth to deliver several packs of pork steaks for the freezer, all we need now is some warm weather for a BBQ!