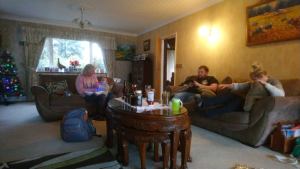 The temperature didn’t rise above 2 degrees today. Jamie decided to fix his broken central heating himself rather than wait for an engineer to call after the holidays. The fault was in the timer control, he sourced the failed part 160 miles away in Blackburn and drove through northern snow to collect it. On returning he successfully managed to install the new part and admirably restored heat to his home. Late in the evening, he and Ruth returned the heater they had borrowed,

Around lunch time, Sarah, Lee, Alice and Mia arrived on a short visit. They had also come to do some shopping in Harborough and call in to see her friend Chloe for coffee. While they went shopping, I took Mia for a short walk through the town and along the canal.

There was snow in Newbold Verdon today, yet just a few miles south in Harborough the few snow flurries we experienced came to nothing. Alice and the highland cattle seemed to enjoy the white stuff!

30/12/20 UK deaths: 981. Current Market Harborough infections: 487. UP from last week: 309. More than three quarters of England will be in Tier 4 from midnight tonight after a huge surge in deaths and infection rate. Bad news for the family as Harborough, Rothwell, Desborough and Newbold Verdon are among those affected. Today the Oxford and AstraZeneca corona-virus vaccine has been approved for use in the UK, roll-out of the jab will start in January 4. 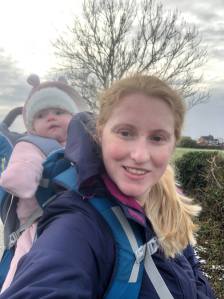 Sarah and Alice out walking 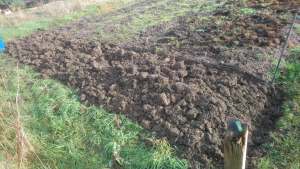 The start of winter digging

After a very hard overnight frost I chose to start digging the vegetable plot. Despite the bitter cold it wasn’t long before I shed several layers of clothing to cool down from the exertion. It seems that the new way of thinking among farmers and gardeners is not to turn-over (plough) the soil, it seems it is better to sow seeds and plants directly into the ground. They say it is better for the structure and condition of the soil. However, I enjoy digging and now with full lock-down what else am I going to do?

This afternoon Sue went on a walk with the Harborough Rambling Club,  it now looks as if it may be the last one for quite awhile. As a further disappointment, she had been encouraging Bridget to join the group and today was her first outing with them. Apparently it  was  a short but enjoyable, muddy walk around the nearby village of Foxton. 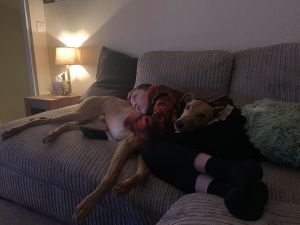 It is all too much for Lucas and Harry!

We are leaving 2020 with the pandemic numbers still going in the wrong direction, it doesn’t bode well for the coming year. I sincerely hope that our saviour in 2021 will be an effective implementation of a program of vaccination,  I have little faith in humankind having the resolve or sense in applying the necessary procedures to defeat this virus as individuals. I read the other day it is expected that 40% of the French population may refuse the vaccine. I do hope that was ‘fake’ news. The virus thrives on ignorance and crowds.

Another hard frost overnight and another couple of metres of vegetable plot dug. Talking to Viv (our neighbour) over the fence, today I learnt that Flossie, one of her three dogs had died horribly over Christmas and that Lulu the cat had also been very ill. She and Ian had not had a pleasant time of it and I sympathised greatly as Flossie was my favourite of the three dogs.

Closer to home, it seems that Sarah and Alice are both unwell with a sickness bug, fingers crossed that is all it turns out to be. What a ghastly year this has been! Midnight cane and went without much of a fuss. Unlike in previous years where Harborough became briefly the centre of a war zone, there was just a couple of detonations and that was it. Even Messenger and Facebook remained relatively reticent. You would never have guessed that a truly awful year had ended and the UK had parted from Europe (well, nearly).

A dull and frosty morning saw Sue and I pull on our wellies and head off to Great Glen for an invigorating 4.5 mile walk. We had been worried that the underfoot conditions may have been mud-suckingly  treacherous, but we needn’t have, the frost had made the once squelchy surface, rutted but solid. We parked in the centre of this expanding village and by way of a well used path following the course of the River Sence, we made our way towards the abandoned site of Stretton Magna village. The views were as interesting as the gloomy conditions, but the exercise and conversation were the main benefit and we reached the deserted medieval village in no time at all. We stopped briefly on the path to look across the hedge line at the extensive earthworks and moated site, the two fishponds and part of the associated field system, located around the  12th century medieval St Giles’s Church. After a brief discussion we decided to deviate from our route and visit the church. 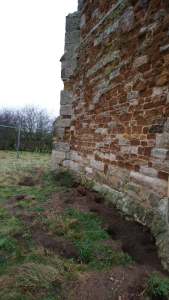 I have passed this ancient monument many times on my way to play rugby in Scraptoft, and often saw people making their way along the field path to its entrance, but today that is not so. The high thorny hedge that encircles the church and yard is now supplemented by a sturdy metal fence preventing entrance. There was a small sign stating the obvious; the building is derelict and unsafe. Tracing the barrier to the rear, we discovered a gap, where with a bit of effort we gained access to the churchyard and its small cemetery. The brick work was in very poor state, the interior of the building was robustly secured with boarding against entry. I spotted with some interest an extensive rabbit warren located underneath the tower. I wondered whether their digging had given them access inside, I mused on the thought of a choir of rabbits and a chief coney dressed in vestments conducting a sermon.  Sue pointed out that the majority of graves were from the 1700’s or earlier, but then discovered a couple of headstones  from much later date. The latest one being from 2004, it was a plot containing a Justice of the Peace and his wife. We assumed they must have lived close-by and requested that their bones be laid here. How lovely we thought.

The rest of our route took us through the Stackley House estate and by a couple of  its cottages towards Burton Overy, then on through a large housing estate on the edge of Great Glen. Again, the conversation and exercise took precedence over what views there was along route the route, as the drizzle arrived we were soon back at the car.

Late in the afternoon I drove to Jamie’s with a sump plug, he was changing the oil on his Citroen and he had somehow left it in my tool box. While he finished servicing his car (in the dark), I chatted to Ruth and she inadvertently solved a long-time family mystery:

In the garage I have a very deep inspection pit, its base is well below the water table and though supposedly tanked, it does readily fill up with water. One day when the children were young I pumped the water out in order to change the oil in one of the cars and to my surprise I found two catfish swimming in the mud at the bottom. The whole family had great fun guessing how they had managed to get into and survive in this small internal pond. I relocated  the fish in the river. Today, through an expose by Ruth, I discovered that Jamie had covertly caught the fish in the river and placed them in the pit, he fed them with fish-food we had for a goldfish by lifting up one of the planks. You have to smile at how long he kept this secret.

02/01/21  UK deaths: 445. Current Market Harborough infections: 435. UP from last week: 101. The British government has decided to close all primary schools in London for the next two weeks. Batches of the newly-approved  vaccine from Oxford University and AstraZeneca have started arriving at hospitals ahead of the jab’s roll out.

Sue reported after her morning shopping run that the town was very quiet and when I returned late morning from my cycle ride there were still very few people about. Maybe people are starting to take the virus seriously again? About time! 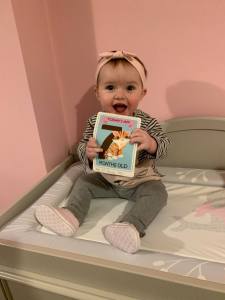 Someone is 7 months old!

03/01/21  UK deaths: 454. Current Market Harborough infections: 382. DOWN from last week: 85. The UK has seen another record daily rise in cases, with 57,725 cases reported. Britain has reactivated the Nightingale emergency hospitals and shut primary schools in London.

Today, Sue and I had arranged to meet Sarah and Alice for a walk around Fosse Meadows Country Park near the village of Sharnford, but she has developed a cough and this morning decided to cancel, wisely deciding to have a Covid test instead. Fingers crossed the result will be negative. With the change of plan; I did more digging and Sue some more shopping. Afterwards, we brought Christmas to an official end by taking all the decorations down, including the external snow projector and packed them away in the loft for hopefully a better celebration in 2021.  We later video called around the family on our Google Home Hubs, it’s a convenient and safe way to keep in touch, how wonderful technology can be.