21/12/20 UK deaths: 215. Current Market Harborough infections: 183. DOWN from last week: 111. France has banned lorries carrying freight from the UK and countries around the world have ended flights amid fears over the new mutant corona-virus strain. Eurotunnel has stopped Europe-bound services from its UK terminal and Dover’s ferry port has shut to traffic.

Charlotte and Harry getting muddy.

When we think things can’t get any worse, up pops Mr. Covid (Mk.2) again to prove us wrong! Christmas ruined for most, the UK made into a pariah among nations and tonight’s conjunction of Jupiter and Saturn (Christmas star?) is spoiled by thick cloud. Even the TV is full of ancient re-runs! I think it’s time to look at old holiday videos, smile and remember: Scotland 1988.

22/12/20 UK deaths: 689. Current Market Harborough infections: 189. DOWN from last week: 92. Today I received the result of my recent Covid test by text, email and NHS App, and as expected it was negative.

This morning I attended an appointment with the podiatrist at the Sports Injury Clinic at the General Hospital in Leicester. I had a fitting for some shoe inserts and they should be ready in about a month. The hospital was extremely busy administering the new vaccine and I passed a very long queue, all waiting patiently, observing the safe distance rule. It was noticeable that the nursing and administration staff were wearing much more PPE than on my previous visit a month or so ago.

Late afternoon, we had a brief visit by Charlotte and Harry. Always on the look-out for a bargain, she had bought half a dozen chickens for a £1 each and needed our freezer to store them.

Optimistically, Jamie and Ruth are planning to visit Scotland in February and have booked a cottage in Blairgowrie. As Sue and I are missing out on our South America trip they have thoughtfully invited us to join them. However, the news tonight that Scotland is going into full lock-down in the New Year probably means it won’t happen.

23/12/20 UK deaths: 744. Current Market Harborough infections: 178. DOWN from last week: 48. From Boxing Day, areas to enter Tier 4 include Sussex, Oxfordshire, Suffolk, Norfolk, Cambridgeshire, parts of Essex currently not covered, Waverley in Surrey and Hampshire, with the exception of the New Forest.  And, as if we haven’t had enough bad news, a “highly concerning” new variant  that is suspected of fueling a rise in cases in South Africa has been detected in the UK,  it is yet more transmissible and it appears to have mutated further than the new variant discovered in the UK. Despite our infection rates falling, here in Harborough we are to remain in Tier 3.

With fog lights attempting to peer through the dense early morning gloom, Sue and I drove to Newbold Verdon with a car full of Christmas presents. The rest of the family will be arriving at Sarah and Lee’s place during Christmas Eve to spend their one night sanctioned stay to celebrate Christmas together. Though we won’t be with them to enjoy the festivities, hopefully the gifts we left for them will to some extent normalise a situation that is far from our usual family tradition.

We spent an hour with Sarah and playing with Alice, before taking Mia for a short walk to a very wet and muddy Bagworth Heath Woods. We were fortunate that it didn’t rain while we walking, that came afterwards. However, we did deliver a very cold, drenched and mud splattered Mia back to Lee who promptly popped her into the bath. Sarah had taken Alice with her to the hairdressers, leaving poor Lee (who works from home) to take a break from office Zooming and clean up the family pet.

Our journey home was not without incident. Though most of the fog had cleared, as we neared Harborough we came

across groups of soggy but smartly attired Hunt members atop their powerful steeds making their way to the various assembly points in readiness for their (hopefully fruitless) pursuit of the fox.  Soon afterwards, with the rain lashing down, we cleaved our way through two sections of road which just a few hours previous had been foggy but dry. As we arrived home, the River Welland was just breaking over the lower bank  next to the house. Over the next hours, the rain was relentless and by dark the water level could be seen flowing quickly just below the upper bank by the drive. The forecast was for more heavy rain overnight. With the water level reaching the level of the driveway we decided to stay awake and monitor the river until it either subsided or spilled over to wards the house. So snug and dry, watching Netflix in the lounge, we checked the level each hour until 3am, when it became obvious that we weren’t going to be flooded, and sleep came readily. Several properties downstream (according to local Facebook) were not so fortunate. By breakfast time the water level was a full metre lower and dropping fast.

When Ellis and Lucas get excited about Xmas.

24/12/20 (Christmas Eve) UK deaths: 574 Current Market Harborough infections: 248. UP from last week: 36. Rather ironically, China is to suspend flights to and from the UK, joining a growing list of countries who have instituted travel bans in light of the new variant.

Daylight saw the Welland behaving itself within its usual watercourse. Early morning I made a last minute Christmas card run in the car around Harborough and Kibworth. I had a little bit of excitement on my return when I encountered another flood at a notorious section under the Langton railway bridge, I came across a forlorn looking motorist left stranded standing next to his car. He seemed very unimpressed as my bow wave slopped above his knees as I steamed by. I spent the rest of the morning replacing a fence panel that had blown out in the storm of two days ago. 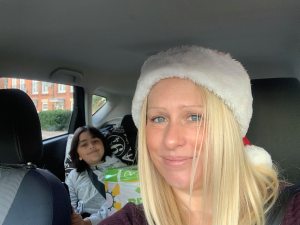 During the afternoon Sue spent some time mooching around the shops in town, looking for last minute bargains, sadly returning empty handed (I think).

Bridget and Jim arrived with a cover for their car parked on the driveway, as I gave them a hand, a few flakes of snow  fluttered down. Soon after afterwards, Jamie and Ruth arrived with Maddie, we are looking after the rabbit during the festivities. Amusingly he came with his own stocking full of presents.

We started the celebrations by opening a  bottle of this years wine during the evening, though biased, we both thought it a good one; refreshing, fruity and quite strong.

The rest of the family had successfully managed to meet up in Newbold Verdon and settled down to a night of silly games and quizzes, washed down with seasonal beverages, while Santa and Rudolf parceled their way towards the UK. 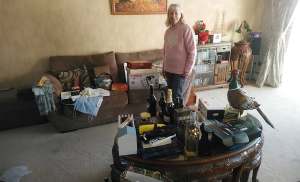 There was a hard frost overnight but no Disney thick carpet of snow with gently falling snowflakes and the sound of jingle bells hanging in the air. This is Covid Christmas and things are different. Overnight the country did get a surprise Christmas present with the welcome news that the UK and Europe have settled their differences and have come to a Brexit trade deal.

After a light breakfast Sue and I got down to the serious business of opening presents. This year we had no grandchildren dressed as elves to distribute the goodies, and though we tried, a rabbit proved to be a very poor substitute. We are fortunate in being gifted with children, relatives and friends that are generous in their giving and the pile of surprises under our rather small tree, though not as mountainous as when the whole family are present, still took a couple of hours of unwrapping, perusing and discussing. It isn’t a day to dwell on the misfortune of the many who have suffered terribly over the past 10 months, yet I think it fitting to acknowledge that the best gift of all, is that the Palmer family hasn’t been touched by this terrible virus.

As the youngsters of the family sat down to their festive meal in Newbold Verdon, we drove to The Swan in Braybooke in Sue’s shiny four wheeled Christmas gift for our socially distanced 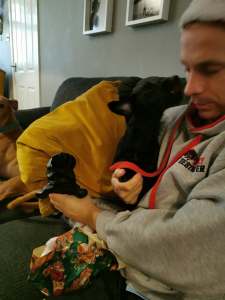 and Covid regulated festive meal. What a fine and substantial meal we had too, no washing up or clearing of crumbs afterwards! Sadly, we did miss the family banter and leg pulling around the dining table with the inevitable spilled glass of wine causing frantic but amusing reactions. This is Covid Christmas and things are different.

Arriving home we video called Newbold Verdon on their new Google Home  Display, it was lovely to see them all and chat, however Jamie, Ruth and Joey had already left to spend the rest of the festivities in Bottesford with Ruth’s brother. Lee’s parents had arrived to spend the night and accompany Sarah, Lee and Alice to Twycross Zoo the following morning. Late in the afternoon the Rothwells journeyed home, ensuring that Covid rules were kept! 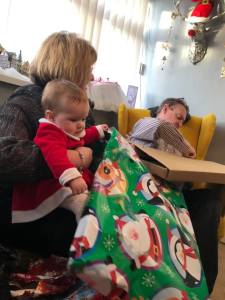 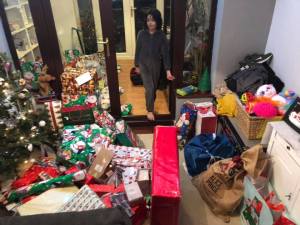 That evening, Sue and I amused ourselves with a lazy night watching a film with a few tipples and an unseasonable early bedtime.

It was Christmas Day and things  HAD been different.

26/12/20 (Boxing Day) UK deaths: 210. Current Market Harborough infections: 334. UP from last week: 149. A new antibody treatment with the potential to give people instant immunity after being exposed to Covid-19 and prevent illness is being trialed by scientists in the UK. 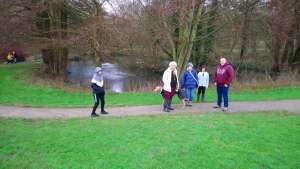 Today is Lee’s birthday. With storm Bella predicted to hit the UK, during the morning Sue and I drove to East Carlton Country Park and met up with the Rothwells for a Boxing Day walk. Last year, as a family we went Duck Racing and in previous years we have been Greyhound Racing, but with much of the country in Tiers 3& 4, there is little choice. Optimistically, we did have Harry the greyhound, but unsurprisingly none of the other dogs out for a walk in the park would give him a race!

Lee, Sarah, Alice and Lee’s parents visited Twycross zoo. Remarkably, despite being in Tier 3 the zoo was open. I guess they desperately need visitors in order to pay for the animal’s food.

27/12/20 UK deaths: 316. Current Market Harborough infections: 466. UP from last week: 302. Worryingly the numbers are  rising rapidly, it looks as if Harborough and the country are heading towards full lock-down again. Sadly, eighteen care home residents in Belgium have reportedly died after contracting corona-virus, following a visit from a man dressed as Santa Claus.

A sunny but desperately cold day.  Apart from a brief visit to Doreen’s to give her a jar of my excellent pickled onions by Sue, we both stayed snug and warm at home. Gwenda in Canada rang, she was well but it is very cold in Ontario too, unusually they haven’t had any snow, but lots of freezing rain.

Jamie and Ruth arrived late afternoon to collect Maddie and borrow an electric heater as their central heating controller has broken. Next week is forecast to be very cold with a strong possibility of snow, I hope their heating gets fixed soon! 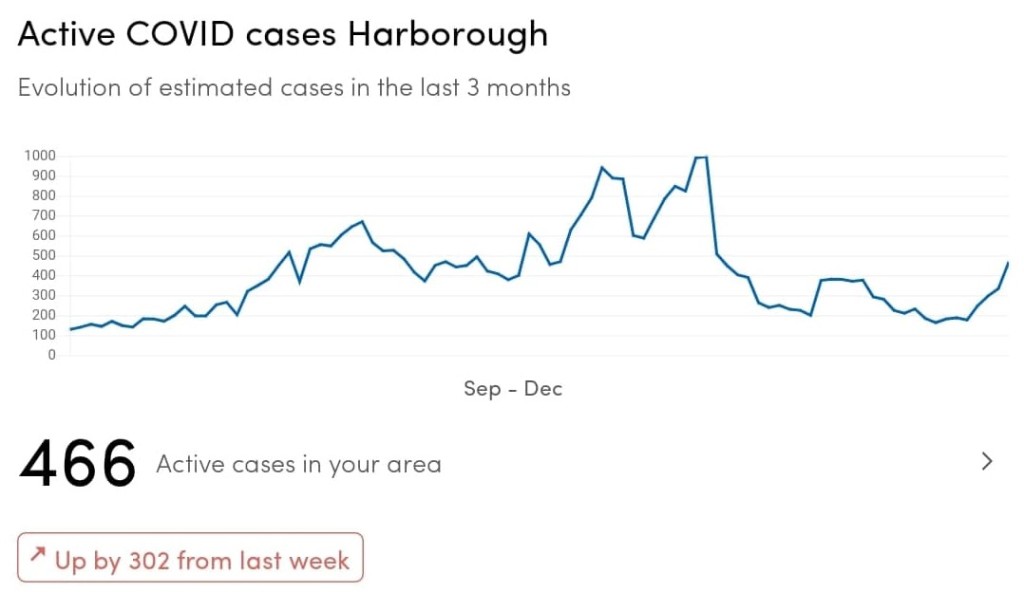