The one and only overnight stay is here in Manaus. It is the base from where most rain forest expeditions begin and in similar fashion it also offers the greatest number of tour opportunities for visiting cruise ships.

Last night we could have forgone our evening meal (god forbid!!!) and joined a caiman hunt in small boats with presumably torches, or an onboard search light to light up their eyes in the dark. These creatures and their kin the crocodile and alligator are the only animal that send shivers down my spine. These prehistoric carnivores have to my mind had their day and I see no use for such a calculatingly dangerous creature to exist any longer alongside the human race, unless stuffed and exhibited in a glass box and used as warning to naughty children that they will be eaten by one of these if they do not desist from their misbehaviour. It will be no surprise to you, that we stayed on board and enjoyed a ‘Burns Night’ of Scottish fayre instead.

Rather than speed off on another one of the river offerings or enjoy the comfort of an airconditioned coach and any number of rainforest discoveries, Sue and I planned to spend a day exploring the city that we had travelled so far to berth in.

After an early breakfast, we disembarked and caught the complimentary shuttle bus to the harbour terminal just a very short distance away. We had planned our route for today many weeks prior on Google Earth, I had dropped the necessary map into Google Maps on my mobile in preparation. As I have already discovered, using Google’s off-line maps is awkward and quite buggy, in future I will stick to the much better ‘Here Maps’ I have used in the past.

Mindful of the many warnings in literature and over the ship’s Tannoy to be wary of pick-pockets in the city I had opted to travel light. No rucksack or camera (I would use my mobile) and the small amount of cash I carried was, like my phone, securely kept in zipped pockets in my shorts, along with the boarding card necessary to gain entry onto the ship. 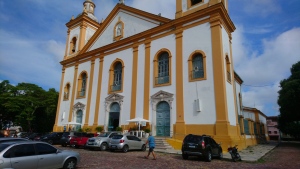 Rejecting the taxi drivers attentions in the terminal we set off to see the city’s Cathedral(Our Lady of the Conception), just a short five minute walk away. Though early, the sky was clear so the heat and humidity was building rapidly. We had worried that being a Sunday many of the things we were hoping to see might not be open, but as it turned out we needn’t have been concerned. The Cathedral sat on top of a small hill, ensuring safety from even the worst Amazonian floods, there was a small and pleasant tree filled park area in front, with winding cobbled paths leading up to a quite steep set of steps to the building’s entrance. Quite a punishment for those sinners with any physical impairment! In the centre of the main street running alongside the Cathedral was the ‘Little’ Big Ben of Manaus. Looks nothing like its London counterpart other than it is a clock on a tower.

Inside the Cathedral it was refreshingly cool and though not as elaborate as many we have seen it was much the better for it. In many of the pews were sat a variety of the city’s citizens, quietly staring at the modest cross on the altar, others with head bowed, possibly in prayer or maybe asleep. In a side chapel I held a conversation with one of the parishioners, me in English, he in Portuguese and somehow we managed to exchange names, where we were from and that I had three children and he had two. A considerate policeman intervened and also in Portuguese, insisted that we visit the adjacent museum to see the sacred icons and he thoughtfully guided us to its not particularly obvious entrance. We stayed here a while, enjoying its cool atmosphere, I guess you can’t have an icon publicly sweating.

We continuing following our predetermined route through the street market, busy with people engaged in a spot of holy day purchasing. There were many food stalls selling unknown delicacies with tantalising smells that whispered ‘try me’. We as a family have done this many times in the past in one dodgy country or another and have never suffered any ill effects, so why did I have the ship’s mantra running through my mind, ”Make sure that everything is cooked properly, glasses and cutlery are clean, avoid eating the skin of fruit and be mindful that refrigeration may be not up to the standard you are used to. Avoid ice cubes …..” etc. etc.

Guiltily, we weren’t tempted to try even the smallest of morsels. Well…………we have just had breakfast haven’t we? I bet they would have tasted gorgeous! Damn you Magellan!!!

At the top of the street was the next item on our list, the Manaus Opera House. Built entirely from European imported materials and inaugurated in 1896. The ‘Teatro Amazonas’ is a symbol of the regions past ‘golden era’ during the rubber boom and the literature says that it is ranked as one of the world’s most elegant theatres. I have to agree, it is most splendid and at least on a par as the ‘Royal Albert Hall’ in London, if not better. 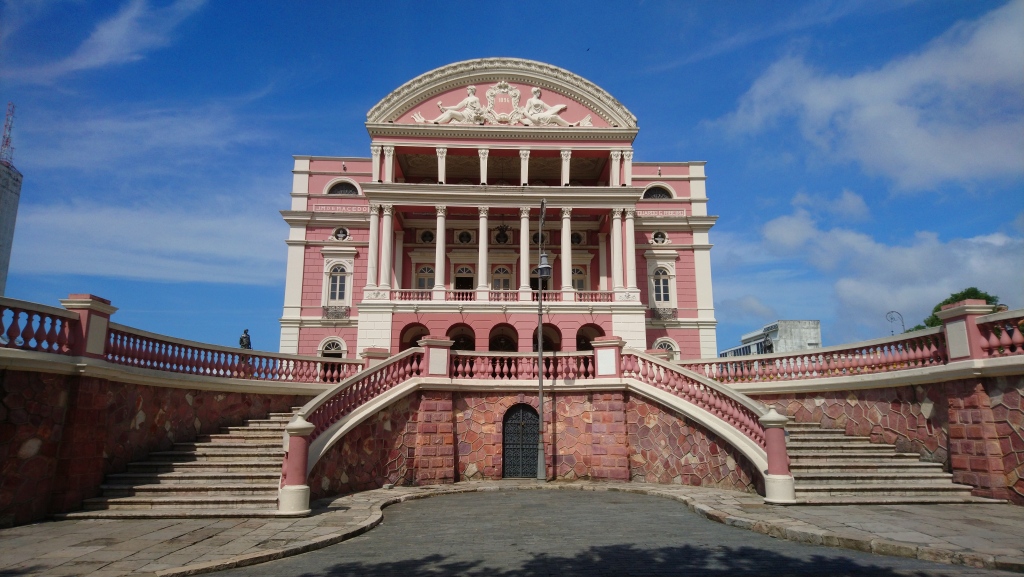 Pleasingly, the ticket office accepted our $10 entrance fee and we joined a small group of other nationalities under the guidance of one of the staff. As spoken English is acknowledged as being universal, we Brits are used to being abroad and the locals accommodating us by conducting tours in English, leaving other nationalities to struggle with interpretation and this was the case here. Our guide was young but as you would expect if employed in the state’s premier attraction, very knowledgeable. We heard about the building’s construction, the materials it was made from, the people responsible for its creation and some of the productions that have taken place in the past. It is still used for opera and plays, though luckily for us not today, otherwise it would have been closed to tourists. 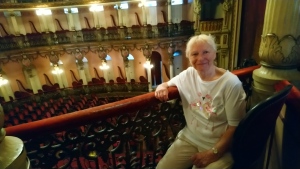 We sat in the private boxes, of which there are five levels, passed through the ridiculously elaborate ballroom (now not used) and saw the many busts of composers, Rubber Barons and Brazilian dignitaries. We marvelled at the many paintings on display and examples of  the original décor, now consigned to small sections protected by sheets of glass.

The opulence is as astounding as the examples of dress worn by the opera goers of the era, totally inappropriate for the Brazilian climate, shipped from Europe and only suitable for a much colder climate. The women must have suffered greatly for their fashion. 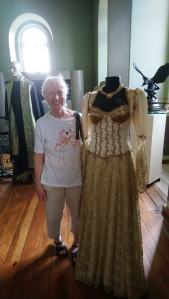 The ‘Teatro Amazonas’, a place well worth visiting and though not on my bucket list, it should have been.

Google next took us through the increasingly ‘oven’ city streets to the nineteenth century colonial style ‘Palacio Rio Negro’, built as the private home of a German rubber baron Waldemar Scholtz, later becoming the Governor’s residence. It is located at one end of a small elongated park that follows the course of a small stream which eventually spills out into the Rio Negro. The building is very well preserved and is in contrast to many of those that we passed in our route there. Now thoroughly roasted, it was with glee that we discovered that the building contained a ‘rest’ room with icy air con. Heaven! Sitting on top of an aircon unit with chilled air blowing between raised T-shirt and skin is the best!

We tarried here quite a while before exploring this free and fairly interesting example of another rubbery slice of extravagance. There were a few others who had taken some time out of their day to visit, they seemed mostly to be Brazilian and very interested in their own history. Most of the exhibits did have a brief description in English, most of the paintings were of European scenes and strangely one was of Bleriot’s first flight.

With the rooms thoroughly walked through, we ‘pigged’ out on some more blasts of freezing air before tackling the return journey to the ship. Google took us through the park then along the river frontage in a wide arc back to the terminal. After leaving the park it was not a pretty route, past lines of poorly maintained craft of all shapes and sizes moored against a crumbling concrete bank. Across the waterway could be seen the Favelas, small square homes stacked one up on top of the other, little or no space between them and  seemingly marching up the hillside. Not a place for a European to venture at any time of the day.

The sun was high and there was no shade to be had, the heat radiated off road and wall, there was no escape. Our walk quickly became a trek, then a slog. It wasn’t far, but we were exhausted when we reached the sanctuary of a cool shuttle bus. Five minutes later we climbed the ship’s gang plank, Sue to scuttle off to the room to take a cold shower and me to hit the ice dispenser in the buffet restaurant. Aaaarh, blisssss!

Many quaffs of freezing liquid heaven later, Sue joined me. Swapping rolls, I descended below to what I soon discovered, was a not so cold shower (damn that Brazilian sun) and Sue took over monopolising the ice dispenser button.

We had planned (weeks ago) to sortie out again in the afternoon and visit the Musa Amazonian Museum and Fish Market. Though both were very close to where the ship was berthed, the cool cocoon of the Magellan was too tempting,  they will have to to wait for another time, perhaps.

The ship drew anchor at 6pm, eased away from her berth and said goodbye to the principal city of the Amazonas. Yes Manaus, you did give us a hard time today, but your delights are considerable and we only  briefly touched what you had to offer. I would love to return and sample further.