Since the last blog, hardly a day went by without Sue either having a Christmas meal with one of her U3A groups or failing that, scoffing biscuits, mince pies and coffee with friends. I think she may be preparing herself for the cruise that we have booked in the New Year. I, on the other hand have taken a completely different and virtuous approach to the coming onslaught of enticing and delectable meals by attempting to reduce the consumption of calories. However, on the 19th I did meet up with a group of pool playing friends for a Mexican Christmas meal at a restaurant in the town. Sadly, the calorie count was as hot as the food, undoing all my previous parsimonious efforts!

Unfortunately, this was followed up the following day when the whole of the Palmer Clan descended on Willow Bank for Curry Night. The two curries I made were not as fierce as the chilli packed fayre of the previous evening but the intake of calories was. As expected there were further serious slippages to my regime over the coming days.

iThe weather on Christmas Eve was foul; dank and very unchristmassy! I can’t help thinking that there is a mail bag full of irony when each year we send cards to family and friends illustrating heart-warming yule-tide scenes of crisp and clear snow scenes with a jolly Santa and an entourage of reindeer, robins and mistletoe or conversely,  wise men, shepherds and the baby Jesus, under clear skies resplendent with star and a distinct impression that it is scorching hot. Where are the cards depicting global warming reality; drizzle, fog, muddy dogs and runny noses? Perhaps that is a niche in the market that is ripe for exploitation? Maybe not!

Never-the-less, on the  ‘eve’ the Palmer clan congregated not as usual at Willow Bank, but at the new venue of Gilberts Drive, Newbold Verdon. Sarah and Lee were this years hosts for the festivities, collectively supported by the females of the clan (mostly). There was to be no ten-pin bowling and no racing greyhounds (other than a lethargic Harry), there was to be a new format for Christmas. Crazy golf and a duck racing were to be the order of entertainment.

Lee had been working during the morning so the rest of the family met up with him at the Treetop Adventure Golf venue in Leicester city centre to begin the revelry. The venue proved to be very popular, with many Leicester families opting like-wise to kickstart their Christmas. There are two 18 hole courses, all housed in what I guess was once a huge underground carpark that has been imaginatively transformed into a tropical island jungle. We played both courses.  Nine balls in play made for some interesting shots, which coupled with the deliberately tricky holes, made the outcome a rather random affair, but certainly fun. Ellis’s strategy of ‘whack the ball’ as hard as you can clashed with my more professional approach of considered stroke play, frustratingly we both often ended up with the same score. Not an activity for the serious golfer lacking a sense of humour. 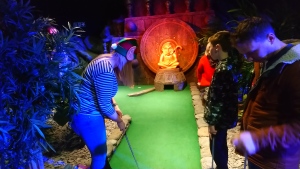 Despite Elis’s concern that Santa may leave presents at the usual Willow Bank drop-off, he needn’t have worried as through the magic of  ‘chimney post’ he got the change of address correct, and sometime during the night, he came!!!!

Christmas Day saw  no abatement to the murky conditions outside, so we satisfied ourselves with opening packages, consuming huge quantifies of food and drink, watching TV and occasionally dragging reluctant dogs (eager to stay in close proximity to party scraps) outside for necessary  poop breaks. Celebrating Christmas is exhausting, so it was no surprise that everyone was snug in bed, surrounded by their own little piles of squirreled away gifts by 10.15pm. Jamie left during the evening to travel back to Desborough to feed Maddie before heading north again to Bottesford to see Ruth.

Boxing Day began early for Lee (5am). He drove over to Cotgrave to pick up his parents Ian and Diane, bringing them back in time for breakfast. By the time I arose from my snug little duvet den it was 8am and he was back, a full English breakfast was beginning to smell ready. Perfect timing!

Twelve of us sat down to an excellent and substantial buffet breakfast, amazingly cooked by Lee, I wondered if he had cooked the bacon and sausage on the exhaust system of his car during the journey? Just how did he do it?

The rain arrived as we set off for Kenilworth Castle to take part in the annual Duck Race  organised by the local Lions. It was a most unpleasant soggy drive, but miraculously as we parked up, the rain stopped. We had all arrived at roughly the same time, with Jamie and Ruth being the last. Sara and Lee bought our racing ducks (£2 each) while the rest of us headed off to watch the entertainment taking place around the site. The castle, though mostly ruined, was and still is, a very impressive fortification, Sue and I thought it ripe for a future visit.

We stood a while watching some Morris Dancers , garbed in ludicrously bright clothing adorned with flapping hankies, weave their intricate dance steps as they 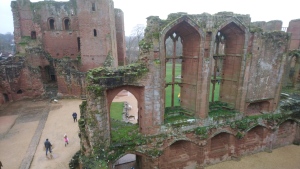 stepped to the rhythm of a fiercely beaten drum. It became obvious that Harry was becoming increasingly uncomfortable and agitated by the noise, so we moved away a little to calm his nerves. Leaving Lee and his parents to continue watching the dancers, the rest of us moved on to explore the ruins.

We met up again in time to walk to the  Duck Race which started from the ford at the foot of the castle, finishing a quarter of a mile or so down stream next to the town swimming pool. After a brief and humorous speech given by the local Mayoress, four bins containing 1500 numbered, yellow plastic ducks were tipped from the bridge into the water. Four men wearing waders cajoled those ducks caught in back eddies and tree roots into the main current with large plastic leaf sweepers. The substantial crowd then followed the swirling yellow flock along the riverside path. The racing current played games with the fake  quackers, spinning them into tight groups or driving them into still waters beneath the bank, while a few fortunate ones bobbed (most upside down) along in the main stream. By the time Suraj and I reached the finish line the winners had long since arrived, the winning numbers displayed prominently on a board. 1st place=£100, 2nd+£75, 3rd=£50 and 4th=£25. Disappointingly, no one in our group had a winning duck, but the profits went to good causes and after all, it was Christmas. 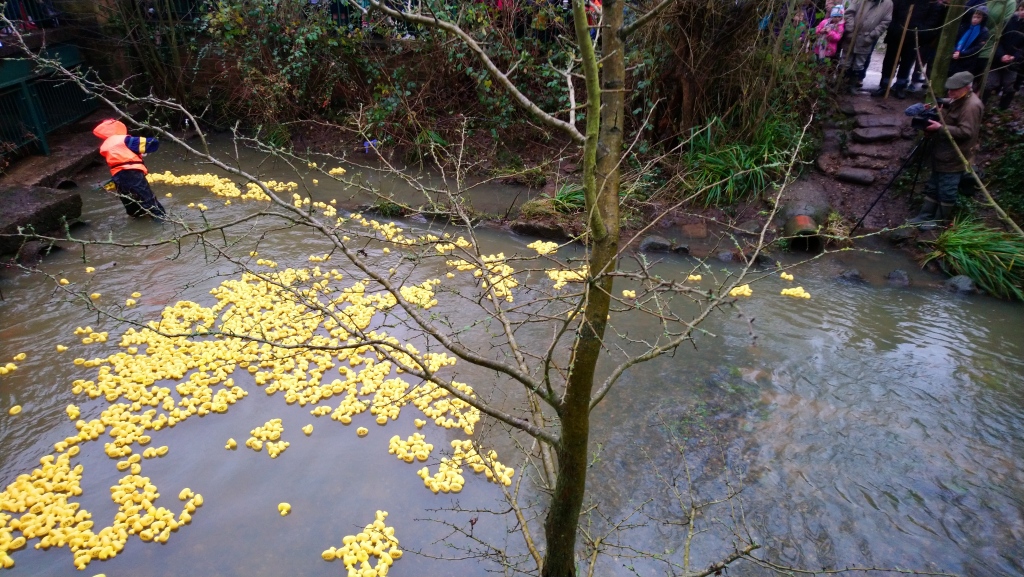 The rain had kept away for the race, but it now began to drizzle. I suppose it was to be expected when you release so many ducks!

We drove to a nearby pub for something to eat, but they were busy and couldn’t accommodate us all so we moved onto another just a little further down the road. Here they could fit us in, but frustratingly though they could accept the dogs, they couldn’t accept the two boys (under age, though the dogs were even younger). Charlotte and Suraj opted to travel back to Rothwell with the boys and Harry, rather than try and look for another venue. The rest of us stayed and had a drink and a light snack before heading back to Newbold Verdon.

We only stayed briefly with Sarah and Lee as (believe it or not) the day also happened to be Lee’s birthday, along with his parents they were having a celebratory meal at a restaurant in Nottingham later that evening. We packed the car before saying our goodbyes and headed south. We went  via Jamie’s place to feed Maddie as he was staying over at Ruth’s and then on to Charlotte’s to drop off some of the presents we had managed to pack into Sue’s Suzuki. We eventually got home, very tired.

The next time the family met was on the 28th, for the first time in many weeks it was dry and a relatively warm 10 degrees. Sue had prepared a buffet lunch prior to attending a family tradition, a Pantomime. This year there was to be a minor change in that it wasn’t a true panto’, but a performance of ‘Swiss Family Robinson’. Ruth was staying with Jamie so joined us in our ‘end of Christmas‘ activity. After congregating at Willow Bank (dogs included) and grazing through Sue’s culinary preparations, we made our way to The Cube in Corby (less dogs). Though the theatre was by no means full, there was still plenty of atmosphere, with many of the laughs coming equally from the audience as well as cast. Lots of fun and a welcome change from the usual format and a fitting finale to Yule Tide.

That concluded the family’s Christmas entertainment for 2019. With a New Year to look forward to, I wonder what it has in store for us all? Certainly a new family member on the way for the Palmers (boy or girl?) and I don’t suppose for one moment that Brexit is finished with. However, it all depends on your point of view:  ‘An optimist stays up until midnight to see the New Year in. A pessimist stays up to make sure the old year leaves.’
– Bill Vaughan

News Flash: Today (30th), Sarah had a scan and discovered that she is having a baby girl! The news was revealed by group video chat on Messenger. The date of birth is now the 27th May, but I am still sticking to my prediction of 2nd June. 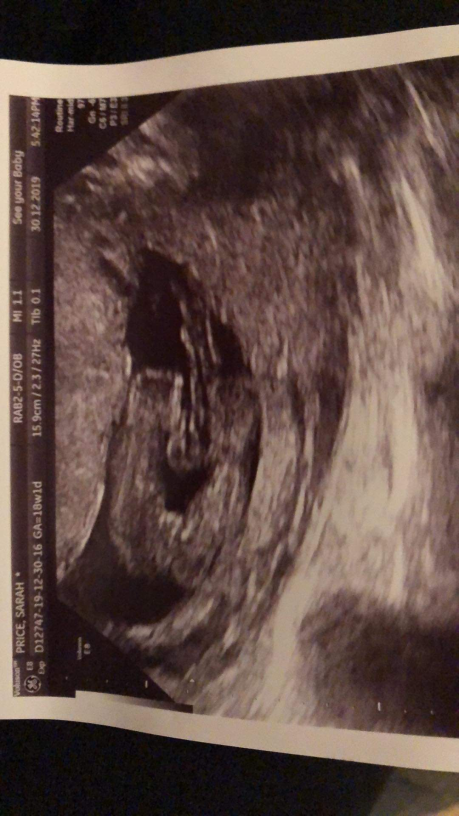