In the garden its’s that time of year when nature slips into full gear; plant life erupts from its winter dormancy in anticipation of summer warmth and most visiting creatures are involved in quite entertaining reproductive pursuits. It’s a fascinating time, the Scots Pine growing just a few metres from the lounge window has many patrons to its seed and fat ball hanging containers festooned on its lower branches and the seed scattered daily at its base receives a miscellany of visitors of the non-feathered variety. Sue is quite an expert in the many bird species seen hopping from branch to branch in the queue for breakfast lunch and dinner. The spotted woodpecker seems to be her present favourite, Mr and Mrs Pheasant are mine, and our resident boisterous Robin is welcomed by both of us. A pair of rooks, a gaggle of blackbirds and gang of strutting wood pigeons are less welcome as they bully and consume large quantities of seed, while the smaller varieties of avian look on in envy. Of the four legged creatures, a pair of Muntjac deer have taken to visiting the base of the pine at various times of the day, naturally very skittish, this couple seem uncaring of the passing pedestrians and vehicles just 50m away on Welland Park Road. Going about our internal house duties, we often stop to gaze at the activity on and around our banquet tree, often calling each other to observe some fresh sight and then standing and chatting, I do believe we spend more time discussing the garden wildlife than watching TV!

The nest building/improving urge seems to have spread to the Palmer family. I (after putting off for quite a few years) have painted our bedroom, thinking that the £10 tin of Whispering Sage was a good economical investment in ‘modernising’ our sleeping quarters turned to dismay when ‘to match’ Sue felt the need to change the curtains and the bedside lights and no doubt a new duvet is on its way. Apparently the main light switch is now the wrong colour too!

Staying with the sap rising theme, on the last day of the month (May) Peter and I drove over to Newbold Verdon to take down a very large holly tree that was shading Sarah and Lee’s wildlife pond. The previous day I had used my chain saw in Desborough, cutting up some railway sleepers in the back garden of Sean’s daughter in readiness for her dad to create some steps. Surprisingly the chain was still good enough (without being sharpened) to fell the holly. However, things were going far too well so it was appropriate when the main trunk fell across the pond and punctured the liner causing it to slowly empty. Lee noticed the drop in level as we were disposing of the wood, so before leaving for Harborough we moved the over-large liner slightly so that the hole was above the water line and then refilled it. The frogs can now sunbathe to their hearts content.

Charlotte wanted me to take out a buddleia that was more like a tree than a bush, it was growing in the corner of her back garden and she wanted to put her compost bin in the spot where it grew. The chainsaw had another outing and I benefitted by yet more firewood for next winter.

Jamie caught the bug too. He asked me if I could help him move his shed, but 35 minutes later when I got there, he had already done it! Some how he had managed to lift it from one side of the garden to the other and set it by the new wall of his garage that he had built the previous week, when I arrived he was busy painting it. I set about helping him by cutting up all the wood that was surplus to his garage and then after packing it all into my Fiesta I cleared out the rubbish in his garage and took that down to the dump on my way back home. His next project is to put a low fence along the front of his property. On the 9th, Suraj and I had a meal at the Nepalese restaurant in Desborough, we were keen to see if the standard had dropped since we had been there ( a couple of years ago), the meal was good and we should go again.

Jamie was involved in a charity event to raise money to support the son a school friend of his. Michael Hobbs’s son has a rare genetical condition that is quite life limiting. The Mudder Challenge looked the sort of thing that I would love to have done, Bl****y Knee! Sue has continues to be heavily involved in many U3A activities. She has recently discovered that her archery skills would have guaranteed her a place among Robin Hood’s band of merry men and her bowling prowess wouldn’t have been out of place on Plymouth Ho alongside Sir Walter Raleigh and Sir Francis Drake. Along with walking, weekly cinema visits and car booting on a Sunday she still finds time to terrorise the spiders in the garden and hoover up fallen leaves within an hour of them leaving the tree!

During the middle of the month Sarah came over and I helped her erect a huge Marquee and a large 6 man tent that the previous owner of her house had left. It needed to be done on our lawn as the marquee was seriously big, it had been used to house children’s birthday parties. It took a quite a time to work out how to put them up, but all the bits were there and in excellent condition. There wasn’t time to take them down before she and Lee had to leave to visit some friends that evening. The following day it rained, Sarah and Lee drove down to Oxford for the day so the tents couldn’t be packed away until they dried out. Two days later Peter and I did the job, however, both of them had been sold by then on Facebook, so Lee picked them up later that week.

Sarah came out of her leg support a few days before she and Lee flew off to Iceland on the 22nd May. They stayed the night prior to flying with us and we had the pleasure of looking after Mia for the week. They stayed in an Air B&B in Reykjavik and hired a car to get around. They had a wonderful time, were lucky with the weather and visited most of the well known tourist spots as well as some they discovered themselves. Sarah returned to work the day after they returned, she found it quite tiring after nearly two months off. On the 4th of June Sarah again jetted off, this time with four other friends to Cyprus. She is there at present, though today she contacted us to say that the villa that they are staying was burgled while they out last night and £1500 in cash was take. Luckily, Sarah only lost £30 and the robbers weren’t interested in the passports or tablet/laptops and left them. The Cypriot police told them that there are several gangs working the tourist spots and that they had been probably watched over several days. More on this in the next blog. 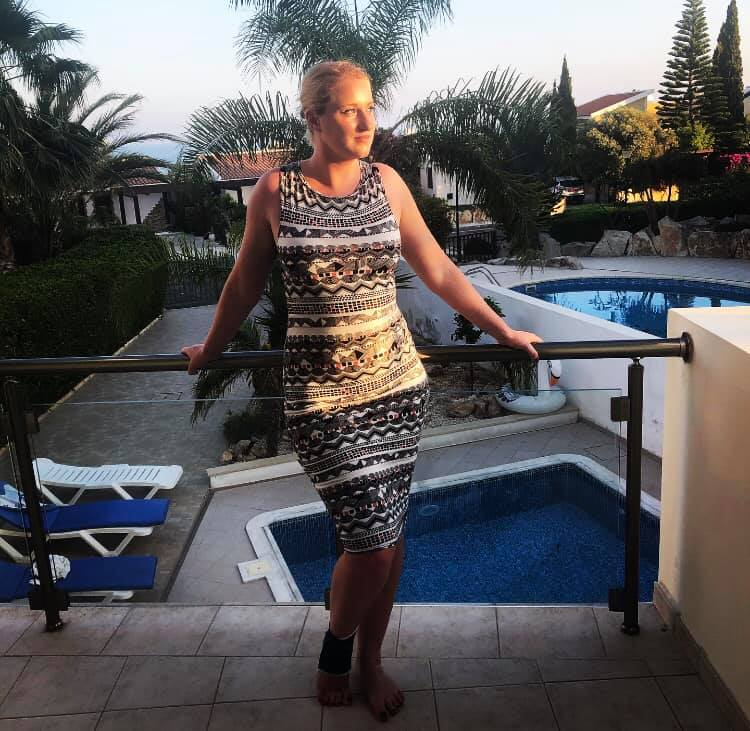 Depressingly my foot, knee and now right hip are still giving me problems. As yet I still can’t walk very far and have had to put off long rambles with John or take Harry and Mia out for the day, they are limited to short walks during the day on the occasions when we are looking after them. Frustratingly, going away walking for a few days is out of the question. Doreen continues to give me regular reflexology sessions and I have recently purchased a specialised knee support that seems to be helping. Improvement is slow, but it is getting better, sloooooowly!!!