On the 16th April, while Sue took Ellis to see the film ‘Dumbo’, Peter and I visited Sarah in Newbold Verdon. We ripped up the decking surrounding their summer house that the previous owner had failed to maintain and was now in a sorry state. It took us most of the day, only stopping briefly for a fish and chip lunch.

On the 20th Sue and I went to see a Queen tribute band called ‘Mercury’. They gave a decent performance at the lighthouse theatre in Kettering, having never seen Queen perform ’in the flesh’ I can only judge by what I have seen on the TV and from the 1918 film ‘Bohemian Rhapsody’ but the audience around us certainly were enthusiastic in their singing and clapping to each song. The band have been going for twenty years and were authentic in their reproduction of the music, but somehow I felt a little disappointed and I don’t know why.

Easter Sunday saw the family meet up in Rothwell to have lunch prepared by Charlotte. Sarah and Lee brought dessert (too much) and we supplied some of the drink. Jamie had flown out to Corfu earlier that morning with a couple of his friends. After what was a splendid meal it was decided to take the dogs and the boys for a walk. The knee and foot that had been causing me such problems over the last few months had started to feel ok, soooooo why did I think it a good thing to chase after Lucas when it was running that caused my knee ligament to tear? As I set off on the chase it passed through my mind that I shouldn’t be doing this, then the inevitable happened, something exploded in my foot.

I am now back in pain with my right anterior talofibular ligament torn. How stupid can you get? The number of times I have insisted on children and fellow rugby players on ‘warming up’ before any explosive activity are legion throughout a lengthy teaching and coaching career. Why didn’t I take my own advice? Obviously, with age you get stupid!!!!

However, life goes on, so the following morning I drove up to Newbold Verdon with Peter to laydown the new decking for the summer house. My foot was sore, but I took it carefully and let Peter do a lot of the carrying. Lee Joined us on the second day and we managed to complete the job by 6pm. Just enough time for Lee to paint the new decking as we drove back to Harborough and before it got too dark to see.

With the arrival of much needed rain I managed to sow three rows each of carrots and beetroot in my top allotment. I was lucky that the couple of hours it took to finish the task, the inclement weather decided to take a break, being distrustful of weather forecasts I also filled up my four water butts. It began to rain as I finished! Pleasingly, the potatoes had started to pop up and the onion sets were growing strongly, even some of the asparagus were making an appearance. Returning home through a short shower I was keen to keep the ball rolling and set about transplanting lettuce from the greenhouse into one of my raised vegetable beds in the garden. Again as I finished along came another brief shower. Shall I buy a lottery ticket I thought? I didn’t, so will never know whether I would have been the next UK millionaire, at the time Charlotte was on a run of four consecutive wins of a free lucky dip, how lucky (or unfortunate) is that?

The Friday night family gathering (26th April) for curry didn’t take place; Jamie was still in Corfu, Sarah and Lee were recuperating in Newbold Verdon and Charlotte and family were house bound with Ellis ill, suffering from a sickness bug. Sue decided to exploit the unexpected break in routine and booked a ticket to see a Bob Dylan tribute band in Kettering. For once I didn’t accompany her, Mr. Dylan’s music has never appealed to me and his failure to turn up at his own Nobel Prize Award ceremony hasn’t ingratiated himself to me, or I expect to many of his fans. There were many unsold seats on this tribute performance. I stayed at home with my poorly feet up and watched a film on Netflix on the cinema system with a bottle of ‘Chateau Vin-allo’ as company.

On the 27th I had a dilemma, should I go and watch Leicester Tigers take on Bristol Bears at Welford Road or should I watch the Harborough 1st team take on Dronefield from Derbyshire in an end of season promotional match? I made the right choice! I chose Harborough. The weather was horrible, cold and windy with a few spots of rain in the air but the rugby was first class, better than any I have witnessed at Welford Road for quite a number of seasons. The skill, commitment and drama was worthy of any Premiership match. Opting to play into a fierce wind, after 10 minutes Harborough were soon behind by two penalties (0:6) and when one of the home forwards (George Lee) was shown a red card for foul play (after a lengthy discussion between referee and intervening female linesman), the prospects of a Harborough win diminished greatly. Dronefield are a good side and with the wind at their backs,attacked relentlessly, but the 14 men of Harborough stood firm and tackled like demons. When Harborough did get their hands on the ball they showed that they were lethal in attack with one move resulting in a try to edge them into the lead (7:6). Disappointingly, after a succession of penalties the Harborough defence was breached on the stroke of half time and went behind (7:13). With the wind now in their favour, soon after half time the home side crossed the white line but failed to convert (12:13). Now on the the attack a penalty soon edged them into the lead (15:13), but Dronefield were as good in their defence as Harborough had shown in the first half and broke away to score an unconverted try (15:18). Soon after Harborough replied with a penalty (18:18). As the game was coming to a close Harborough forced themselves over the line only to drop the ball on the grounding. Frustratingly it was the last action of the half and the whistle blew, with another two ten minute halves now having to be played. Was it not going to be Harborough’s day? They had played with 14 men for most of the match and now they had another twenty minutes, had they the energy left? Again, playing against the wind they went down a penalty (18:21), but resolute defending saw the half out. Now with the wind in their favour Harborough swept downfield in a gorgeously flowing move to score out wide and a superb touchline kick edged them back in front (25:21). With the game fast running out, Dronefield built up a series of attacks that resulted in a yellow card for one of the Harborough players. Now with only 13 men, the defending was desperate, with just a few seconds remaining it looked likely that Dronefield were going to score, but as often happens, the last pass that would have resulted in a certain try was fumbled a metre short of the line and to the relief of the partisan crowd, the final whistle blew. What drama, what a game!

Oh yes, the Tigers lost at home to Bristol Bears after leading, in the dying moments of the game to a try scored by ex-Tigers player Thacker. There is still a chance they may be relegated and they have never in their history lost back to back games to Bristol! Oh yes, I made the right choice. 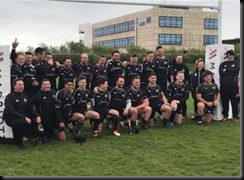 It turned out to be quite a successful end to the season for the club as a whole. The Under 13’s, 14’s, 16’s and 17’s all became County Champions, the under 15’s narrowly losing in the final as did the Colts. I went to see the under 16’s final in Market Bosworth after a day of working on Sarah’s summer house in nearby Newbold Verdon and the Colts were unlucky not to have won their final at Welford Road. One try they scored deserved a better ending to the game than runners-up.

Away from the end of season rugby, I have been keeping myself busy in one garden or other: Sarah’s summer house renovations were completed, Charlotte’s path in the chicken run was finally finished (after a winter’s delay) and I installed an alarm system in Jamie’s new house while he and a friend erected a fence to enclose their waste bins. The greenhouse is now fully planted up with tomatoes and cucumbers, this year I opted not to use ‘grow-bags’ but made a growing medium from grass turf, leaf compost and soil from two large tubs I had planted up last year. It is a bit of an experiment but I have saved £24 and it should work, time will tell.

Since the last post there has been an election of our local councillors. Sue is so disgusted at the conduct of our Parliamentary representatives that I couldn’t persuade her (for the first time ever) to vote. I did take myself along to the polling station and opted for a new and Green solution, though I do not agree with their policy on Brexit, I along with what appears to be the majority of the voting public have had enough of con-tricks from the traditional political parties. It is a great pity that many hardworking, conscientious and democratic local councillors have been ousted because of our toadying, self interested and supposedly national representatives. And it now seems certain that we are going to subjected to the nonsense (at great expense) of taking part in European elections for no purpose what so ever as we shall now be leaving Europe in October (or are we being conned again?) And would a majority (no matter how slender) still guarantee that you win? It appears that premise no longer applies. Remind me again, what is the title of this post?

Rant temporarily over, or at least until the next blog.

Just as I was about to close this post, look what has hit the headlines (I am sure many will not be surprised).

Hundreds of MPs including Jeremy Corbyn, Boris Johnson and nine Cabinet ministers have had official credit cards suspended by the expenses watchdog. 377 MPs to be penalised since 2015 for breaking the rules by not providing receipts or failing to pay back ineligible expenses.
The Independent Parliamentary Standards Authority tried to prevent the disclosure, saying it would have a ‘chilling effect’ on its relations with MPs. But a former High Court judge reversed the decision, saying that the risk of embarrassing MPs was no reason to keep the information secret.

In a previous post I mentioned a past pupil who had been arrested for the suspicious deaths of two people he had lived with. The case has now come to trial and it appears that the quiet, and very clever little boy at the age of 8yrs had the potential to be really quite evil. Ben Field.