We had an abortive start. We left the motel at 9am eager to get on the road as it was a gorgeous day promising to be good for sightseeing. However, with our destination inputted into the Satnav, the screen suddenly went into night mode just a few hundred metres down the road and I couldn’t see anything on the screen in such bright sunlight. I pulled into a side road and attempted to reset it, but for some reason it wanted a Wi-Fi connection to find our destination. We returned to the Motel and parked outside the office and picked up the signal. It was then that we realised that we had forgotten to fill up with fuel, the gas station being 5 minutes down the road in the opposite direction. It is not wise to start a journey in Canada of several hundred km without a full tank as the distance between opportunities to do so are quite large. Thank you Satnav, we love you too. After filling up with petrol our conscientious little bit of technology behaved impeccably.

First stop today was an impromptu pull in to the French River Information Centre. We were the first visitors of the day and on entering the centre to check out what the place could offer two inquisitive Brits, the receptionist suggested that we first do the trail to the rapids which the fur trappers (Hudson Bay Company) had to negotiate. It wasn’t too challenging she said and would take an hour or so.

The trail began with a poster warning us to be careful of the rattlesnakes. Plunging into the forest it became apparent that we had to follow the blue circles, thoughtfully pinned onto trees at regular intervals. It was decided that Sue looked out for blue circles and I looked out for snakes. We soon found out that the local mosquitoes were looking out for us! We both soon made switches from tree branches to discourage the little darlings. The path at times was over a mass of tangled tree roots and at others over and between boulders, but all the time it was through thick undergrowth. It was hot, sweaty going and with attacks of swarms of bugs to distract, there was always the danger of slipping and turning an ankle. Eventually we heard the thunder of the fabled rapids and after another hundred metres or so we broke through the trees to find ourselves on a rocky promontory above them. It was difficult to gauge which was the better, the view before us or the lack of bugs whirling around.

We descended to an information board situated on the rocks next to the rushing wall of water. I couldn’t help but smile when I read that the rapids were originally controlled by the French until a couple of brothers turned up called Kirke and took possession of them. However, it is still called the French River. We stayed quite a while discussing how you could possibly canoe over such a turbulent torrent , we found several very old metal pegs drilled into the rocks that would have helped in some way, but quite a lot of lives must have been lost on this section of river. 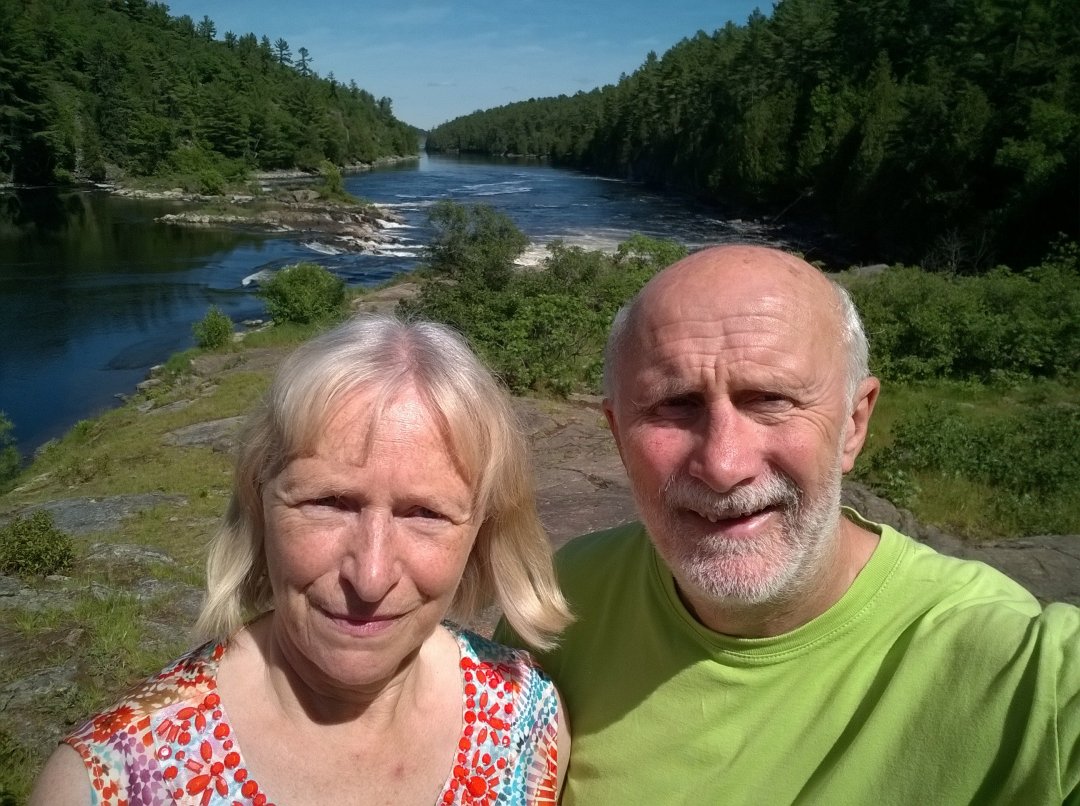 For some reason, the bugs didn’t attack so much on the way back. Perhaps the switches had taught them a lesson they didn’t want to repeat? On seeing the receptionist again I inquired as to whether sending tourists down the trail to see the rapids was their way of ensuring that the mosquitoes got fed. She smiled.

We spent a little time looking at the exhibits on fur trapping inside the centre, but though well displayed there was little substance, so we moved on towards Midland.

Our only other stop was for a pleasant fish and chip lunch at a roadside restaurant. We spent some time talking to the owners, who were very interested in the Royal Wedding and were in despair of Donald Trump. For once, they didn’t appear to have any relatives in Britain or indeed had even been out of the country. They seemed very happy doing what they did, and they served up the best fish and chips I have had in a long, long time.

They next section was a bit of a drag. A gorgeously sunny day, beautiful scenery passing by, little traffic and I was feeling tired and had enough of driving. I was glad when we arrived at our accommodation for the night; The Knights Inn (good name eh?)

After a bit of a rest we took a walk to nearby Little Lake. A lovely amenity for the town. Shallow beaches, warm water, lots of squirrels and trees, plenty of benches to rest weary legs and a vender who sells the largest ice-creams ever! We discovered a new sport and it is brilliant! They call it Disc Golf. Around the lake and through the park we kept seeing strange posts with chains dangling down into circular tub like structures, what were they for? Then we came across five guys practising for a big competition there tomorrow. They explained what they were doing. They had to throw a disc into the tub, from a concrete slab which was 100 m or more away, through trees etc. The disc is really a heavy flattish Frisbee. They use a driver disc (the heaviest) to start with, then they switch to a putter disc (lighter). There is a white circle around the tubs which if the driver lands inside, they can then use the putter from the edge of the line to spin it into the tub. It looked very popular, there were quite a few groups practising. I would have loved to have a go. 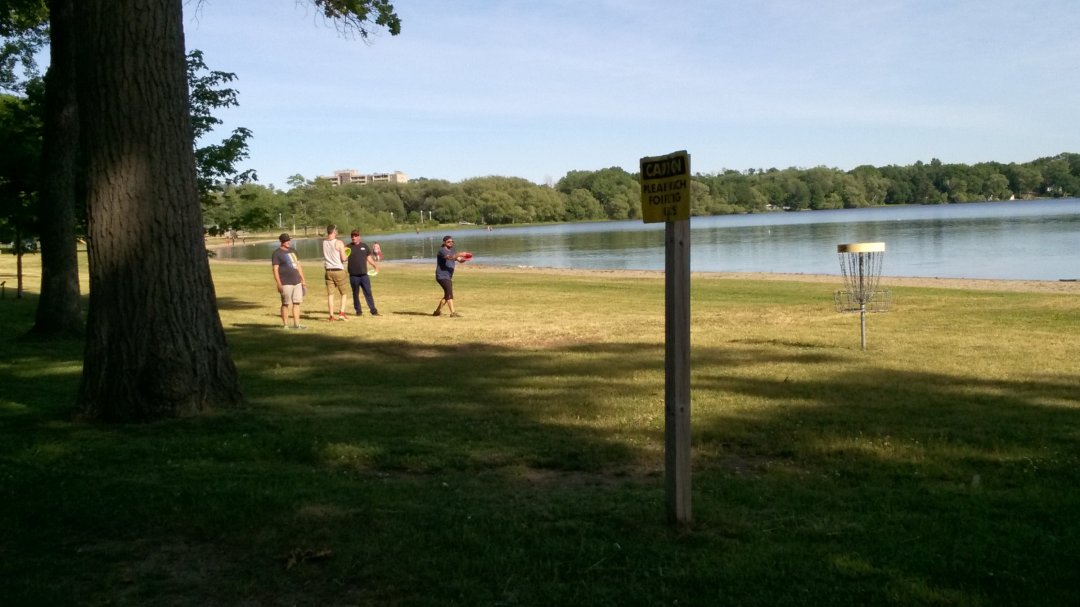 We wandered back to the hotel, then drove down to the harbour area to see the locals promenading and the boat owners firing up there BBQ’s for the evening meal (very civilised).

We went for our own evening meal at probably Midland’s smartest restaurant. I was still wearing shorts as it was such a hot evening so the management placed us at a table away from the other guests and nearest to the toilets. I took their point and was on my best behaviour. The food was really good and when they realised that we were not riff-raff, they treated us well.

Later in the evening, we packed and made our plans for returning home, realising that we are due to attend a family BBQ on Sunday, unfortunately we discovered that we don’t land back in Stansted until 11.15 am and with a 2 hour drive afterwards, it may mean that we may not make it. We shall see.