Our destination today was Sudbury, the Satnav indicating a journey time of around three and a half hours and the sky promised good clear day. We left the motel just after 9.30am after any rush hour traffic had gone.

We hadn’t gone far when we made our first stop in Bruce Mines, we passed a small museum and after a quick turn-a-bout we found it was open. It was a small local museum housing artefacts from the areas’ main industry, copper mining (hence the towns’ name), it also contained lots of eclectic items from local residents. We donated $7 and were given a personal tour by a well-meaning lady who she said was standing in for the usual guide. We were kind and ignored her lack of knowledge or presentation skills and chatted and smiled appropriately. We were thankful that we have at last found a museum open, before July 1st! We spent around 3/4 of an hour browsing the exhibits, but probably the most interesting aspect of the visit was taking place outside where the local Mennonites were passing driving in their carriages and dressed in traditional garb. They were going to the large superstore across the road. Our guide wistfully informed us that they owned many of the farms around and much of the land; I suspect there may be issues there.

Moving on we put quite a few miles under the wheels before stopping for lunch at a Chinese/Canadian restaurant.

The traffic was light all the way to Sudbury and good driving apart from a couple of roadworks where the workers were beavering away replacing the road surface. Unlike the UK where roadworks are controlled by a traffic light system, here they prefer to have people waving flags and holding Stop/Go lollipops. The seemingly odd thing is that these controllers are usually women or indigenous, but mostly both. I wonder if there is a bit of ‘ism’ going on here.

We found our accommodation ‘The Richard Lake Motel’ without any problem, checked in, unpacked the car then set off to find Sudbury’s ‘Big Nickel’. It is the world’s largest nickel and is located outside the Dynamic Earth Centre which is a technology museum with a tour of a nickel mine thrown in. Unfortunately, we were severely delayed by city traffic and arrived at 4 pm to find the museum was closing; the last group of visiting school children were exiting as we approached the entrance. We photographed the ‘Big Nickel’, read all the information boards around the site and then joined the heavy traffic to make our way to plan B, Moonlight Beach.

The beach is situated on Moonlight Road within Moonlight Park and I guess is at its best under moonlight, but under sunlight it is pretty good too. The lake is flanked by very impressive and expensive properties, probably making it THE place to live in Sudbury. The beach itself is golden sand and contains lots of play equipment to amuse small children. We bought a couple of huge ice creams in a small cafe above the beach and sat licking away at a picnic bench watching a growing number of people enjoying the facilities. Cones demolished we took a walk to the other side of the bay, climbed a rocky outcrop following a small path to another small bay. We were fascinated by the many large hairy caterpillars apparently basking in the sun along the route. We eventually worked it out that they had emerged from the weird cobwebby nests clinging to the junctions of branches in the bushes all around us. On our return to the car, the beach had considerably filled up with families bringing their small children to be tired out before bedtime.

Returning to the motel I discovered that somewhere on our travels I had lost the room key, reception provided a new one without having to pay for it, phew. We enquired as to the location of a decent restaurant and then found it, just 5 minutes away by car. The meal was excellent but more notable for an item of food that we didn’t choose. I named it ‘Death on a plate’; it was potato chips covered in cinnamon sugar and fried, two large scoops of ice cream placed on top and the whole lot covered in chocolate sauce. In discussion with the waiter we learned that the concoction contained 1450 calories!!! He seemed amused that the UK now has a sugar tax on such things. 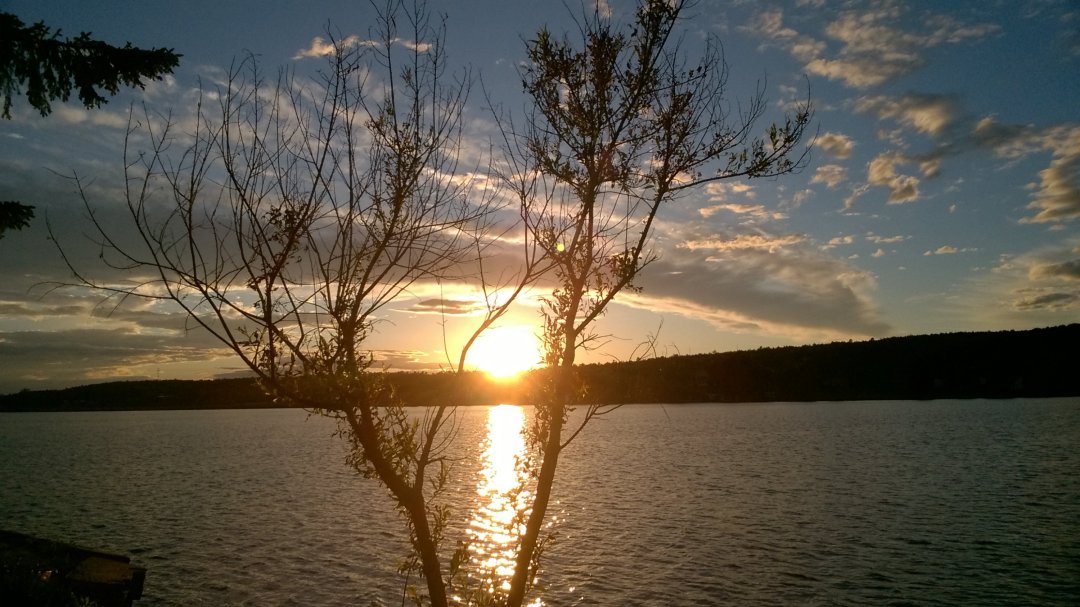 On the way back to our accommodation we stopped to admire the sunset at Richards Lake, before watching TV until zzzz’s.