The Incas haven’t disappeared, they are still living as in Peru’s Sacred Valley, principally in the town of Ollantaytambo and that was to be the focus of today’s tour.

After breakfast our party gathered together in the foyer and left for the start of today’s adventure at 8.00am.

First port of call was difficult one. Chinchero is a small picturesque village containing significant Inca ruins dating from the 15th century as well as an unchanged Catholic church. The problem was that it was at an elevation of 3800m and the lack of oxygen again kicked in making moving around the village a rather breathless affair for all but the locals. However, it was worth it. Great views of the snow topped Andes as a back drop to some superbly preserved Inca terracing. The church was interesting, specifically as it was in the same condition as first built, all the tapestries, paintings and icons were untouched originals. There aren’t any photos as it was not allowed. It was a very dark church, which has contributed to its preservation, but it does have to my mind, a very dark past. It was built on the site of an Inca religious temple, all being destroyed except one small section of wall which can be seen in a side chapel.

After running the gauntlet of eager local retailers through the village, we returned fatigued to the coach. Sue and I sampled along with some others of our party, a very tasty village cheese with sauce on a maize leaf, for the paltry sum of 1 sol. 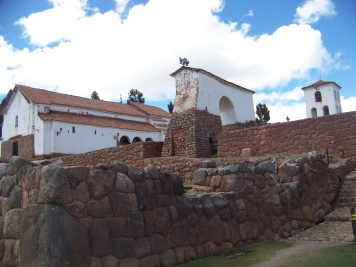 Next stop was still at height to the tiny village of Urpi. Here we watched some traditional Andean spinning and weaving techniques. Of course we were given the opportunity to purchase some of the wares.

Carrying on, we stopped briefly at Racchi Point on the mountain pass above the Sacred Valley to take photos and admire the views, before descending into the valley down a twisting road passing numerous shelters and buildings clinging to the mountainside. One could imagine that  one good storm, or even a minor shake would send these pathetically constructed little hovels sliding down to the valley floor.

We arrived at Ollantaytambo via a short detour due to a local ceremony taking place. The site is one of the most representative building complexes of the Inca Empire. It is where the Spanish Conquistadors suffered one of their rare defeats.  It is noted for its terraced fields, unfinished religious buildings and as an effective fortress. It is a marvelous place, not as large as Machu Picchu but none the less spectacular. Superb examples of the Inca ingenuity in building can be clearly seen in the unfinished temple complex.  Many of the stones had been quarried on a mountain across the valley. You could see from the complex itself, the route the stones had taken down the mountain, where they had crossed the river, the road constructed across the valley and the ramp up to the complex. Amazing. 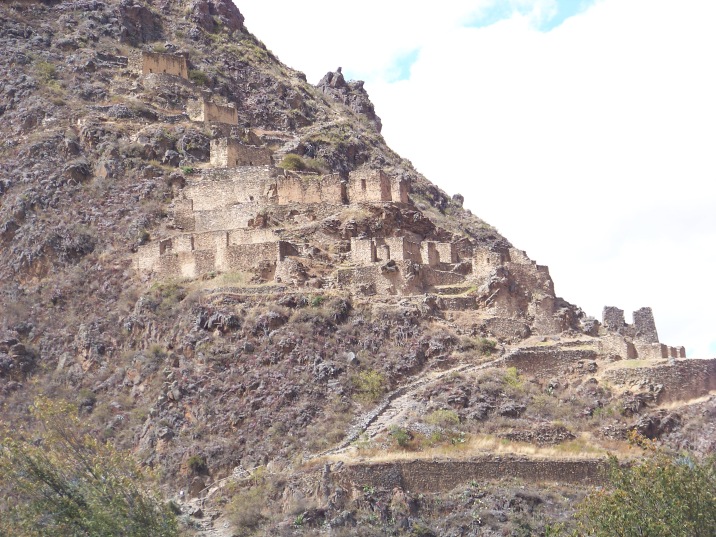 We wandered around the site, before dropping down into the ‘only living Inca town’; it is the best surviving example of Inca urban planning.  We were fortunate that the local celebration entered the square as we were there. Very colourful, masked dancers cavorted among us. They were all men or male children. We saw the women, also dressed in ceremonial dress, at another location as we drove out of the town. We would have loved to stay awhile and watch, but the timetable ruled.

Driving through the valley we stopped at a restaurant for an excellent Peruvian buffet meal. Afterwards, I found two tethered llama and fed them what seemed a meadow full of grass. Llamas do have a huge appetite for the stuff. One of them had large bulging eyes similar to that of Arsenal’s  Mesut Ozil, I couldn’t help but think it may have been him on holiday. Soccer players are known for their love of grass.

We  returned to Cusco just before the sun dipped below the surrounding mountains. It was a very tiring day.