We were up and about for 7am and so were the local rabbits. I wondered if they had been munching grass all night?  As I had a shower Jamie managed to hand feed one of them with our (his) breakfast cereal. 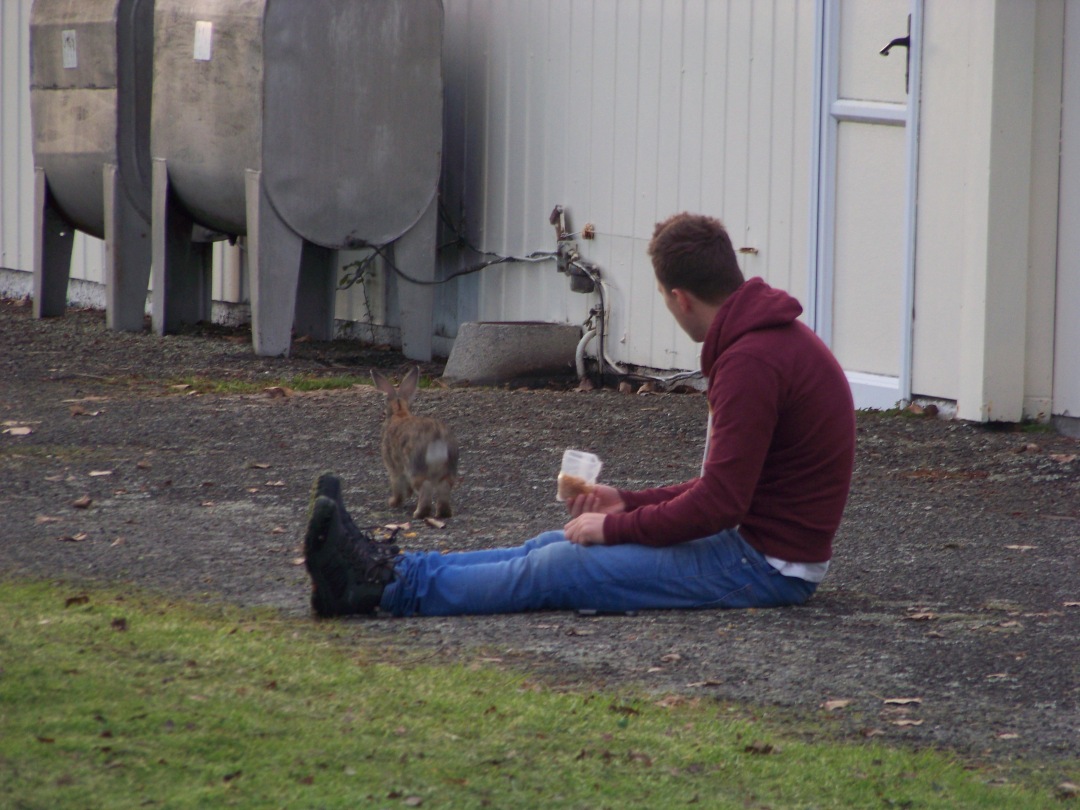 Returning to the White Island Excursion office we got our boarding cards, strange metal cones that we found out later had been used in the dairy business. Quite random!

We boarded our boat along with around 30 other volcanologists. It was another lovely day with a few clouds clinging to the surrounding hills, out to sea the sky was clear and we were warned to cover up to prevent burning. It was flat calm with only a gentle swell which had little effect on our craft as we sped at 19 knots to cover the 50km journey in one hour twenty minutes. 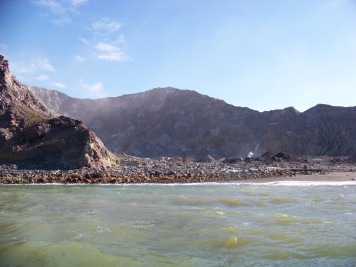 As we closed in on our steaming destination we were issued with safety helmets and gas masks.

There is no safe way to land on this volcanic island. Disembarking meant precariously stepping onto an inflatable and speeding the short distance to a short concrete pier and climbing a rusty ladder while our little craft kicked and bucked in the swell. I would hate to think how it could be managed on a less calm day.

After being shown how to use the masks we set off in two groups to explore the caldera.

The island had once been a hive of industry as miners dug for the sulphur that seems still to be plentiful. Many of the miners succumbed to one disaster or another, until eventually all work stopped in the 1930’s.

This is still a very active volcano and we were warned to walk in single file and follow the guide. The lava chamber was only 50 feet below our feet and a lot less in other parts. Bulges are an indication that the crust is thinner and these do pop from time to time. We were told what to do if one did. There were many bulges some only a metre high, others up to 30 metres and larger.

The hissing of the steam vents and the billowing clouds of choking sulphurous fumes was as a scene from Dante’s inferno. However, I did find the yellow sulphur crystals formed like necklaces around some of the vents, very pretty. Though I wasn’t tempted to touch. The gas masks were necessary. We had been given a pocket full of sweets to suck to dissipate the effects of the acid that instantly forms in the mouth and throat. Even with the masks you choke when you unavoidably become enveloped in the swirling mists.  I see why the disclaimer we signed earlier was so long. Wish I had read it! 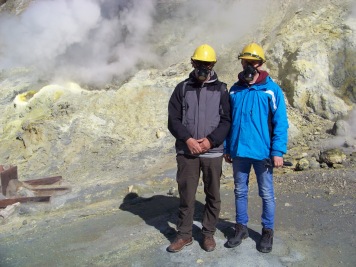 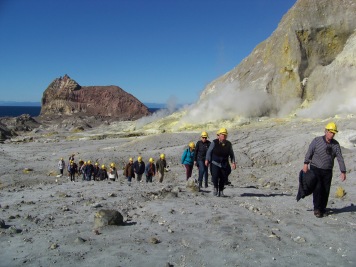 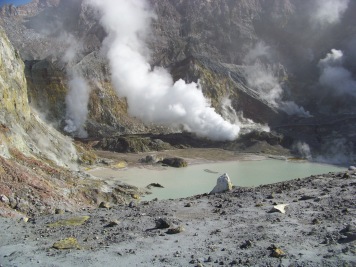 There is a small lake in the deepest section of the caldera, but it doesn’t look inviting. At an acid level measured as below 0, it wouldn’t take you long to dissolve if you fell in. We all kept away from the edge. 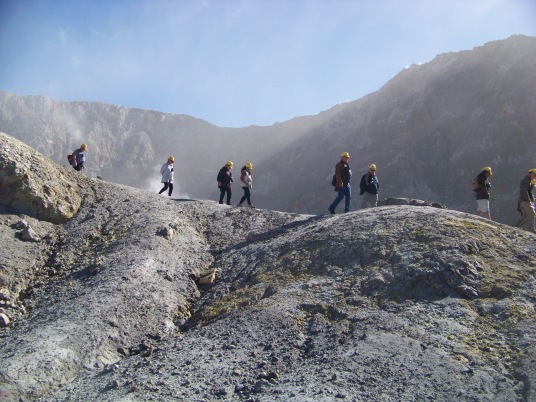 We meandered here and there stopping occasionally to listening to facts or tales of the miners that eked out a precarious living on this most dangerous of islands. Last port of call was the remains of the factory that crushed the rock and extracted the sulphur through heating in large ovens. Most of it is gone now and what remains won’t be here in too many more years. 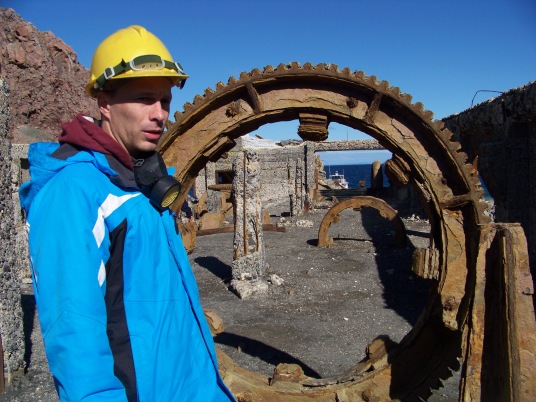 Geologists and seismologists have their measuring equipment all over this island and we often came across their equipment. Most are high up on the precipitous walls and are no doubt read remotely, as are several cameras which can be accessed on the internet. I shall do so when I return home and watch little groups of intrepid tourists tramp in our footsteps.

Returning to our boat was a reverse of the procedure on landing. Safely on board we were given drinks and a very pleasant packed lunch, which we ate just off the island affording a spectacular view into the caldera via a collapsed crater wall.

On the return journey we came across a pod of around 50 common dolphins. It was fascinating watching them swim just under the bow of the boat, obviously enjoying the fun. I managed to get some great photos and video of them.

Back in harbour we set the Satnav for our next destination; Waiotopa Thermal Springs. After navigating through forests that seemed to be undergoing major logging and then passed lakes and dams nestled in wooded valleys we arrived just after 5pm. We checked our van into a campsite at the back of what appeared to be the only bar/restaurant/hotel. All around, steam seemed to be spurting randomly in to the air. Weird.

We ate, played pool in the bar and then returned to the van to play cards and listen to the radio.