Another warm sunny day. After showering we set off early, heading south towards Whakatane. The scenery slowly resolved itself from pleasant Shire-like undulating hills to flatter,  kiwi orchards with a hint of volcanic protuberances always away in the distance on our right-hand side.

We have both been surprised at the tidiness of the Kiwis. Their bungalow type houses are always well presented with cut lawns and hedges. Even the pavements where the grass meets the concrete are perfectly edged. I can’t see the councils in the UK going to such detail.

We arrived at our destination before 10am and soon found the White Island Tour offices that we were seeking. We got our names on the list for the following mornings trip (assuming it goes ahead, numbers and weather permitting). The White Island is NZ’s only active marine volcano and there is a 50 minute boat ride to get to it, complete with gas-masks to limit the number of fatalities from noxious fumes.

On the way back to the van we came across a Maori Meeting House. We let ourselves in and were greeted by a heavily tattooed Maori who kindly explained the traditions and history pertinent to the building. It had been built in 1875 to  bring the tribes of the region to gether in order to demonstrate strength to the invading white man. The house had since travelled to Auckland, then Australia and London before eventually returning to Whakatane in the 1990’s where it was renovated and rebuilt.

We next visited the waterfall which according to Maori tradition was one of the features that the early Polynesian settlers were looking for in a traditional hunt for a settlement, the others being a rock within a river and a cave. The rock was our next visit and then the cave.

Lunch called, so we walked into town and ate at a Turkish establishment. 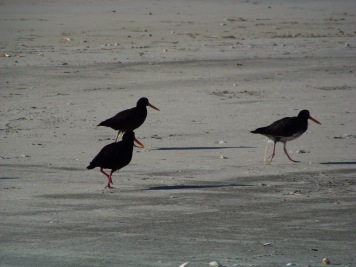 Returning to the van we found a campsite within the town boundary and checked in. The place is undergoing a change in management and the process took quite some time . Afterwards we headed a few more kilometres south to a beach called Ohope, famous for being NZ’s favourite beach.. Yes, it was long and silver sanded, and there were great facilities for children but it held little interest for Jamie and I, so after a brief wonder we proceeded further south to a Nature reserve dedicated to the Dotterel. It is a narrow long spit of sandy dunes that is home to a golf course as well as the birds. We circumnavigated the spit, returning by way of crossing the golf course. We found the Dotterels plentiful and quite skittish.

We  returned to the campsite and spent some time sitting outside listening to the radio and enjoying the late evening sun and refreshments. As the sun slowly dipped below the horizon, watching the local rabbits hop about between the various vehicles proved to be quite entertaining, they would come quite close.

That evening we drove the short distance into the town and had a bite to eat and played pool. Afterwards we caught a movie at the local cinema; Get Out. An interesting psychological thriller that gave you spooks when we left the  cinema and walked down the deserted street back to the van. It is very quiet at 11.30pm on a Sunday night in Whakatane!