Dosed up with tablets I rattled down to an early breakfast. Feeling ok, I managed cereal and two slices of toast, washed down with a small glass of mango juice. I crossed my fingers that I wouldn’t be seeing them again, but thanks to the powers of modern chemistry I needn’t have worried, the valve was well and truly closed.

We came together as a group to walk down to the river, passing a large enclosure with a great many elephants and their mahouts astride, patiently waiting for customers. At the river bank was around a half-dozen  dug-out canoes each one made from the trunk of a large tree. Several of which were loading up with chinese tourists. We fitted 14 into ours, plus a guide and steerer, all sat in a line on low wooden seats resting on the bottom of the craft. Fully loaded the water level was just a hand span away from flowing over the side. 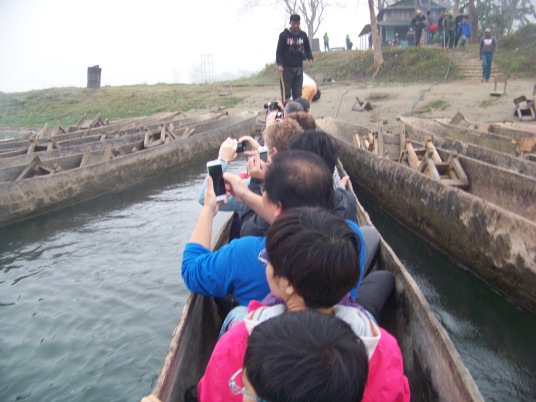 I had the benefit of the guide sitting behind me, giving a running commentary on the passing flora and fauna as we gently eased down the course of the river. There were a few crocs lying dormant on the river bank, but most were in the water with just their eyes peeping out in hope.’The water is too cold at this time in the morning for the crocodiles to feed’, the guide reassuringly told us. When I put my hand in the water it felt as warm as bath water. I hoped he was right and that crocs don’t get frisky until nearly boiling point!

We passed water buffalo taking a morning dip and also spied tourist laden elephants meandering along on the bank in and out of the trees that appeared laden with all sorts of birds with exotic names. I am afraid I only remember hornbills, mostly because they look so funny in flight. The rest either moved so fast, or didn’t at all that they weren’t committed to memory other than they were all sorts of bright colours. Sue has much more interest in such things and I leave that side of the marriage to her. All to soon we had to disembark our stable little craft and venture out onto the crocodile infested shore. 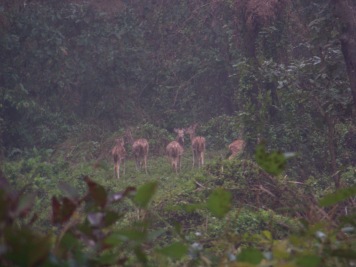 After a short walk we found our way to the Elephant breeding station. It is part of a government scheme to keep the population of tourist elephants going without having to take them from the wild. Sensible solution I guess, but I have mixed feelings. The breeding elephants were chained by the foot to a stake, with the very young ones allowed to roam freely and play, which they did as all youngsters do. It did seem so hard on the mothers. At 11am each day they are taken out for three hours by the three mahouts per elephant, to the jungle to feed and exercise. Sounds like a prison sentence, but who am I to judge? 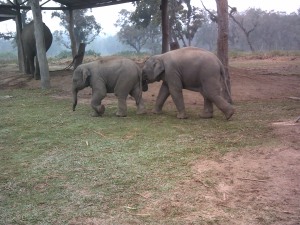 We returned to the hotel via a rickety wooden and sandbag bridge over the river and a short Land-rover drive. There we had lunch and afterwards Sue took a short nap while I caught up with yesterday’s blog.

At 3pm some of the group had arranged to go elephant riding, I had negotiated with the rangers to take me on a walking safari after the riders had left on their steeds. After watching them nervously mount their elephants I and two rangers set off across the river in one of the canoes. My  guides were very knowledgeable on all things Nepalese, but more so on the subject of birds. I learnt a few more names; bobo, fish eagle etc. I had intended to give quite a long list of names that I had made a concerted effort to remember, but I have forgotten them. Sue was back at the hotel reading her book by the pool, so I can’t use her to reference. We carefully came across several beached crocs, so that I could photograph them, but noticing my guide’s edginess, I opted not to get too close on each occasion. I guess the paperwork would have been horrendous for them if I had been eaten. Then I remembered that Sue and I had read in the Kathmandu Times earlier this week that 6 people had been killed by animals in this park in the last 6 months! Mostly by rhino with young! Phew! 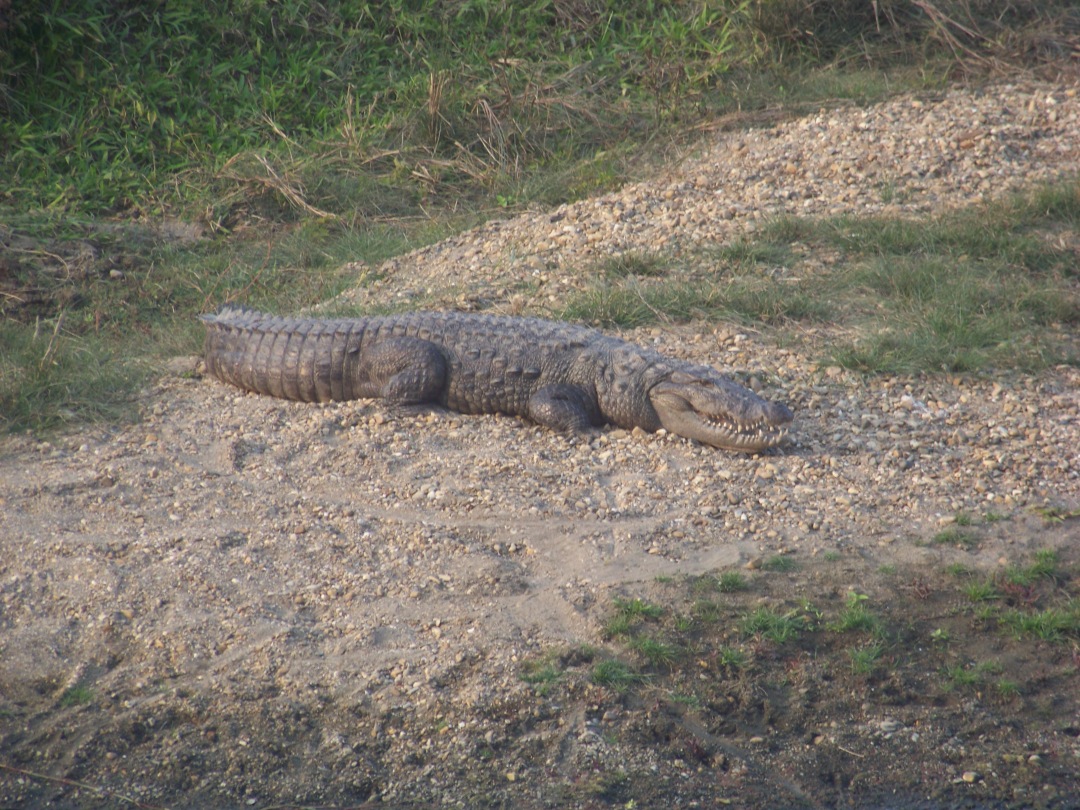 Then of course we came across a rhino, with its calf. Luckily, they were feeding in the river with their backs to us, we retired gracefully into the jungle and this tourist did not insist on getting closer for a better photo. You don’t get such useful news items in the British press.

We saw many monkeys, water buffalo, more birds, some tiger scratching on tree trunks, more birds and a couple of cranes, which are birds I have just remembered.

We returned to our start point by the elephant ‘lift-off’ station via another canoe ride hitched by my guides on a passing canoe returning home. I had a little time to waste before my elephant riding friends lolloped back and I used it to watch a troupe of Rhesus monkeys feeding around a pile of freshly laid elephant dung. I hope they were careful and washed their hands afterwards because you can pick up some nasty bugs in this country!

Early in the evening our group boarded a couple of Landrovers and drove into town to watch some authentic Nepalese dancing, their speciality we were told was the Peacock Dance. Our group was first to arrive and secured front row seats, the chinese came next and swarmed everywhere, taking selfies at every opportunity.The theatre filled up and the show began. It wasn’t particularly colourful, nor was it brilliantly choreographed and it would have helped if all of the dancers had the proper equipment and didn’t have to pretend they were holding it. But, this is a third world country that was nearly knocked back into the stone-age just 2 years ago, so I can forgive them if they cobble together some routines and have the courage to demonstrate it to foreigners. Of course the repetitive power failures we have experienced is an ever-present reminder on how fragile their recovery is. And the Peacock Dance? Yes, it was enjoyable and funny.

On returning to the hotel we had our evening meal and retired to our rooms for yet another early start in the morning….. Down that same damn road!