Though we had a calm night Sue woke with a migraine and wasn’t feeling great. She managed to make breakfast, but sought the dark of the cabin and comfort of the bed soon afterwards. While she slept I first had a wander along the upper deck, looked in vain for any sea-life, checked for approaching pirates, then watched the various shapes of passengers attempting to follow the rather ‘fit’ young instructor conducting an exercise class by the pool. 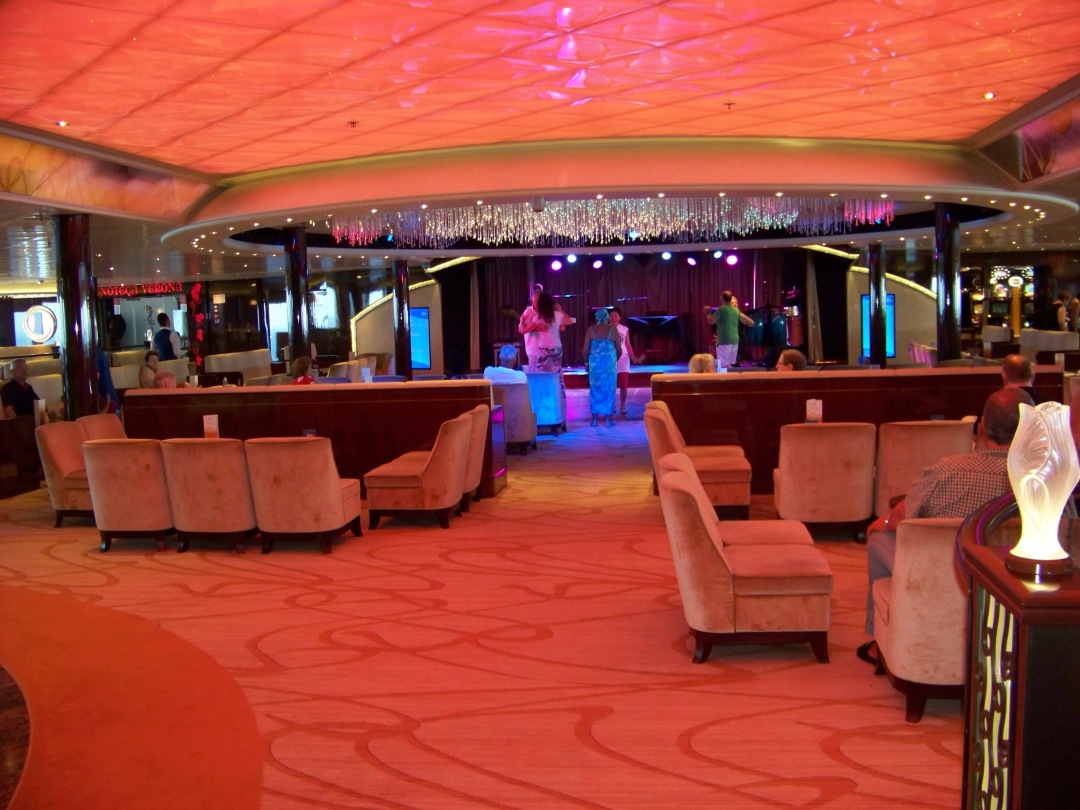 I attended an Italian class for beginners in the ‘Infoteca’. Thinking that the class would be for English speakers and possibly a good opportunity to meet some other Brits aboard, however the class was a mixture of mostly French, German, Austrian and three other Brits. Though our teacher was fluent in each of these languages she was very young and no teacher. Following a sheet of phrases, she spent most time speaking French in response to mistakes by the French participants. It was difficult to stay tuned waiting for the Italian to be spoken. Annoyingly, I could read the Italian phrases and wanted to practise saying them in response to her questions, but she never chose me or indeed any of the other Brits. Disappointing.

After checking on Sue I attended one of the quizzes on Deck 8 on astronomy. I was disappointed with 7 out of 10, but surprisingly it was the top score. I really should have known the other 3.

I took lunch on my own as Sue wasn’t up to eating. I for once managed to keep the portions down to a sensible size, though I am proud not not single chip, burger or hotdog has passed my lips. Everything I have consumed on the ship so far has been healthy or unpronounceable (foreign).

Sue felt a little better for the 3pm, ‘Crossing the Equator’ ceremony. We joined most of the other passengers on the top deck to welcome Neptune, king of the sea and his courtiers. We asked permission to cross and of course he granted our wish, this was immediately followed by a long deafening blast on the ships horn, an eruption of paper streamers which floated away in the breeze and would no doubt eventually sink and pollute Neptune’s home. Bad call there fishy! Of course lots of dancing broke out, which Sue watched and I took the opportunity to hit the gym thinking it would be empty. 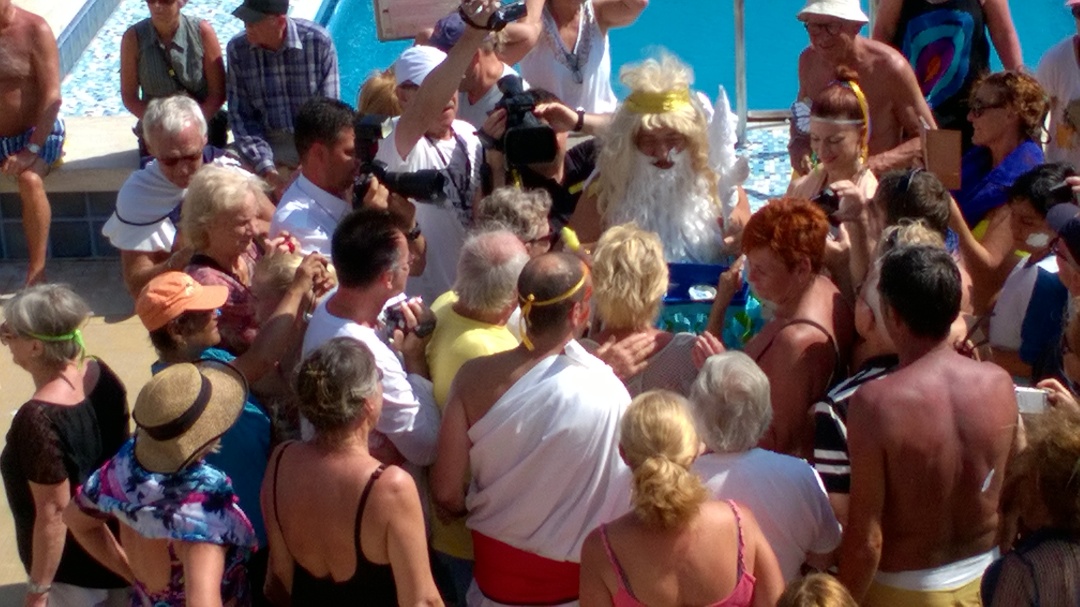 I was wrong, it was packed. Obviously not all passengers are admirers of fishy ceremonial antics. I managed to complete my routine, despite having to wait on occasion for the machines to become vacant.

Returning to the cabin I found Sue had been for an afternoon snack and though not 100%, felt better, so we finished off the afternoon back on the top deck playing scrabble (2:0).

We took dinner early as there were three shows. We caught the 7pm performance of ‘Dance and Songs from a Around the World’ and managed to grab front row seats. We were so close to the dancers, Sue commented on one of the girls having a ladder in her stocking. I confess I was looking at other things! A very energetic show, goodness knows how they were going to do another two performances.

Sue has a fetish for bread sticks. This, I never knew. On the present cruise she even has bread sticks with her ice cream! Tonight I spotted several disappearing into her handbag and now I know what she is up to when she wakes in the middle of the night. It’s not a loo visit it’s a midnight feast!

After a late night amble around the deck helping out with the pirate watch we watched some TV in the cabin.