We had two thunderstorms last night. Neither woke Sue up and I was too comfy to get out of bed and watch the fireworks. The alarm went off at 8am and sleepily we showered and made our way to breakfast. After bulking up on fruit, cheese, ham and bread I discovered to my dismay four hot trays with, sausage, baked beans, bacon and fried potato! Too late , no room left! Never mind. I do feel better for being on a froggy diet, but tomorrow my tummy deserves a treat.

We couldn’t make our mind up where to go today so we turned left outside the gate as a compromise and headed south along the coast.

We hadn’t gone far when we came across a promising looking beach, accessed through some cooling pine trees. A few other cars were dotted about, two of which were the Coastguard, otherwise the place was deserted. I set off to explore a small group of rocks on the headland but on achieving my goal found that I was alone. Sue had stopped on the shore adjacent to the car and was in her element. Foraging along the shoreline is her forte and this place was a bonanza of  coral, shells and dead sea-life. After I had finished my clambering about I joined her and perused the booty. Yep, Lucas has quite a few additions to add to his sea-side collection. 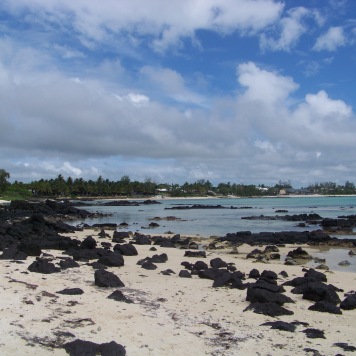 Moving on we stopped and wandered along yet more beaches. The binoculars were in use again, as the coast is fringed by a coral reef around a mile off-shore you can clearly see the breaking waves, the little boats carrying divers, snorkellers, glass bottomed boats and probably a few fishing smacks, though through the glasses you can see line after line of of fish farms.

Wherever we go, the locals of all ages and sexes enjoy fishing. You will see them on all the beaches, usually quite close to rocks up to their waists (and often deeper) flicking out a long, thin, bent bamboo cane with a short length of line and hook. The fish are abundant and though not large, none are thrown back and the strike rate seems to be every 2nd cast.

Our route took us very close to the mountains, and as they are volcanic (extinct) they form quite  exotic  pillars reaching upwards, covered in lush green foliage. I guess some of the photos we took today with the mountains in the background will be worth saving.

We came across a museum dedicated to the first settlers on the island. We were surprised to learn that it was the Dutch who first settled in 1598 though it is understood that the Arabs were aware of its location a long time before that. The Dutch left it to the French after twice trying to make a go of the place, but gave up after disease, rats, pirates and crop failures persuaded them that life was easier back in Holland. We came along late in the islands’ history and it seems that the French lost their influence because they were rubbish at fighting us, no change there then. 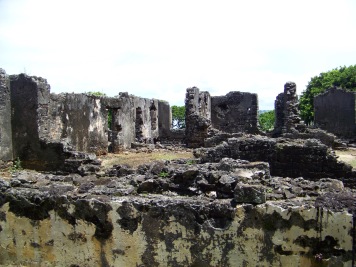 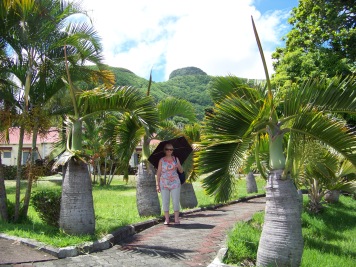 We had lunch today in somewhere quite special. We had spotted a sign for the restaurant a little way down the road stating fresh food and sea views. Turning off the road and driving down through sugar-cane fields on a track fringed with such picturesque palms that they would grace any travel magazine I guessed the sea-view would be good. We were not disappointed. Parking the car under the shade of some convenient fir trees we walked in the heat to the verandahed restaurant perched on top of a high cliff overlooking the prettiest of bays. As if it was necessary, across the bay was a perfect view of Lion Mountain. There were three other couples enjoying the scenery and food and we were shown to a table that must have had the best position for any photographer, right next to a cannon pointing out towards a small island. I took a photo that I think I may enter in some future competition, possibly to win a holiday?

Carrying on with  our meandering we hit a few more beaches and eventually got as far as Mahebourg. Quite a large town and seemingly devoid of tourists. We have wondered why we have seen so few fellow tourists and we guess that it is because the hotels mostly seem to be all-inclusive (including ours). This obviously prevents the majority of foreigners from venturing beyond the boundaries of their chosen accommodation. The Scandinavians appear to be the ones that make the effort to get out and about and today we did come across our first English couple at the restaurant, though we didn’t speak. 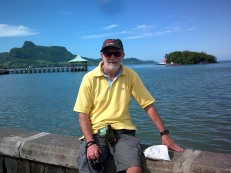 We did a bit of shopping in the town. Sue bagged herself a Dodo and I a T-shirt, then she popped a couple of presents for the family into the boot of the car. We had parked the car down by the harbour and on return we ambled along the promenade and out onto a jetty to admire the views. The schools had finished for the day and it was interesting seeing the boy meets girl situation happening all along the shore. What a beautiful place to remember meeting your first love. I am getting old I think.

We set off back to the hotel using the GPS. It took us into the mountains and initiated a a couple of stops that because of the time of  day proved a little fruitless. The first was through an old sugar plantation and refinery that promised adventurous treks, on arriving we met some guys on bicycles and they told us, come tomorrow at 10am. Later on, I drove up Kestrel Valley hoping to see kestrels, but after bouncing our little Suzuki along several miles of sugar-cane field road and through a ford we reached a shut gate indicating that they were shut. Most things stop here after 4pm and this was after 5pm.

On the way back we witnessed one of the kindest acts we have ever seen. And….. it wasn’t by a human. Racing along the windy switch-back roads you get used to the many dogs long the side of the road, and you always have to keep any eye out for these random creatures. On one particular stretch as I was driving through a small village I could see two dogs walking along the side of the road. Nearly at the point of no return, the smaller one turned to cross in front of me. At moments like these, the world seems to slow down and your focus becomes quite intense as to what is going on around you. I could see that the dog had no eyes. Immediately as he turned, his friend leapt to his side and put his paws across his back to stop him going any further and he steered him back to safety. I had veered across to the other side of the road, but that wouldn’t have been sufficient if the little dog had carried on. What a friend that little dog has. Amazing and humbling.

While I am talking of near misses, yesterday as we were driving over the plateau from the other side of the island on a particular twisty part of the road passing through vast cane fields, on a sharp bend I came across another hire car, on its side in the field and two distraught people standing at the side of it. Stopping, I got out and offered to help, but though distressed they refused help saying that assistance was coming in one hour and they had to wait with the car. They were Scandinavian but as usual spoke perfect English. We left them to their wait in what was pretty hot and humid conditions. I treated the rest of the journey with a lot more care.

We got back after our meanderings just after 6pm and after a little rest, we changed and qate at a different restaurant a little way down the coast. We opted to eat Mauritian cuisine, Sue selecting the chicken stew (curry) and I the fish stew (curry/vindaloo). To be honest we found the starter much hotter than the main course, but enjoyable never-the-less.

It seems we are now in the habit of returning to the hotel at night, sitting by the pool listening to the music or acts on the stage across the water, drinking from our bottle of beer and conversing with the family on messenger. Tonight was no exception before pressing the pillow.