As this was the day we had to catch the ship which was to be our home for the next 10 days, we rose at 8am and began our packing. With that accomplished, two coffees and a chat with Charlotte on messenger, we left to do a spot of shopping.

The hotel was situated just a few streets away from Sydney’s largest indoor market and that is where we headed. On the way Sue managed to buy herself a new dress and a pair of trousers in a boutique and I an 8GB SD card in a 7/11. In the market itself we came across a Community Stall that was selling aborigine art and we bought a large painting of a symbolic lizard that represented  protection from hazards (best way I can put it). Everything in the painting is symbolic and has meaning. The painting is of such complexity that any 5 year old that Sue taught, could NOT have painted it. She returned to the stall later and bought a wooden kangaroo, because as she said, “I couldn’t resist it.” 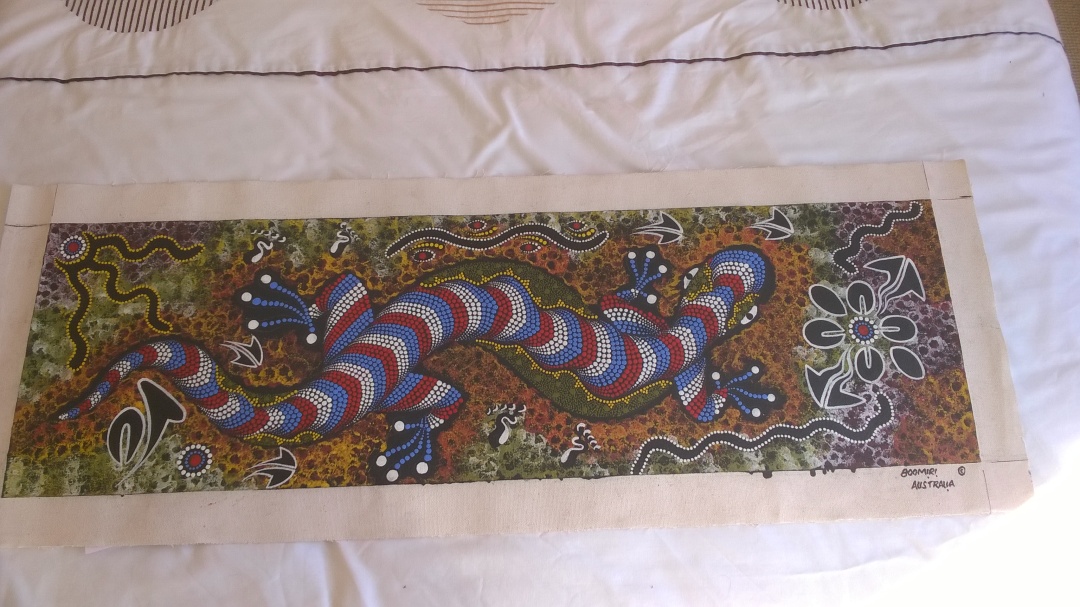 Returning to the hotel we collected our suitcases, checked out (the computer system was still down) and made our way to the station. We waited ages for the train (11 minutes) to Circular Quay and then joined a gaggle of other cruisers’ lugging cases towards the Overseas Passenger Terminal around 400m away. The ‘Voyager of the Seas’ was docked. 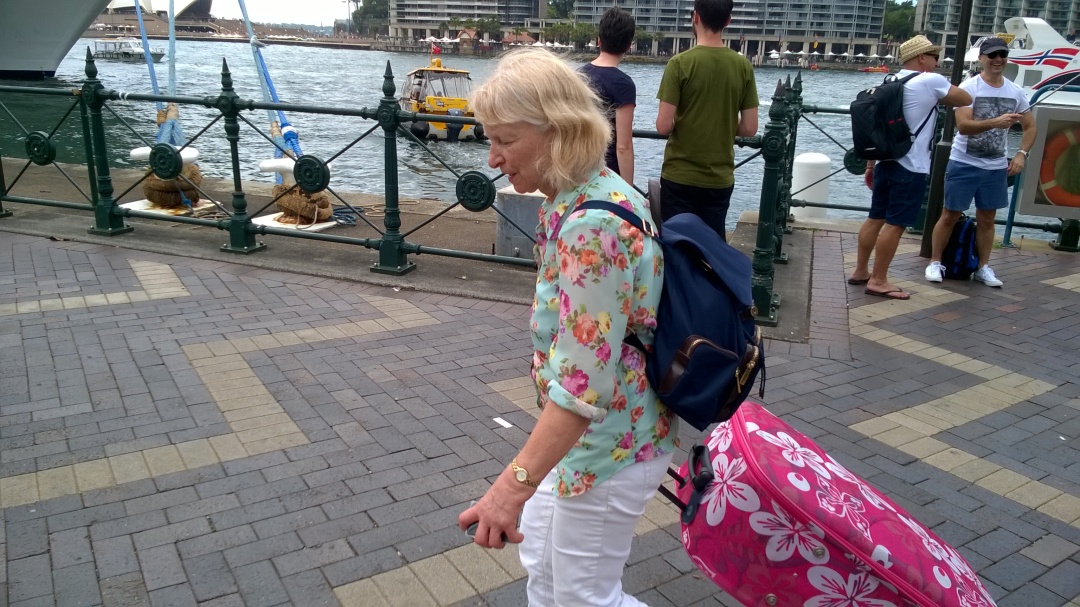 Checking in involved joining one queue after another with all the right paperwork in hand until you reached the gang plank. We had no hiccups and transited the process smoothly. We were soon in one of the restaurants having lunch waiting for the staterooms to be opened, which they did at 1pm.

After a quick turn around the outside decks we found our cabin and met our Asian room maid Alloeta. Our cases hadn’t arrived yet, so we visited one of the cafes for coffee and chatted to a friendly Aussie family (all Aussies appear verbose).

Returning to the cabin, Sue’s case had arrived, so she spent some time unpacking. She claimed to my disbelief that while she did so I had fallen asleep, even though no one else in the room corroborated her story. 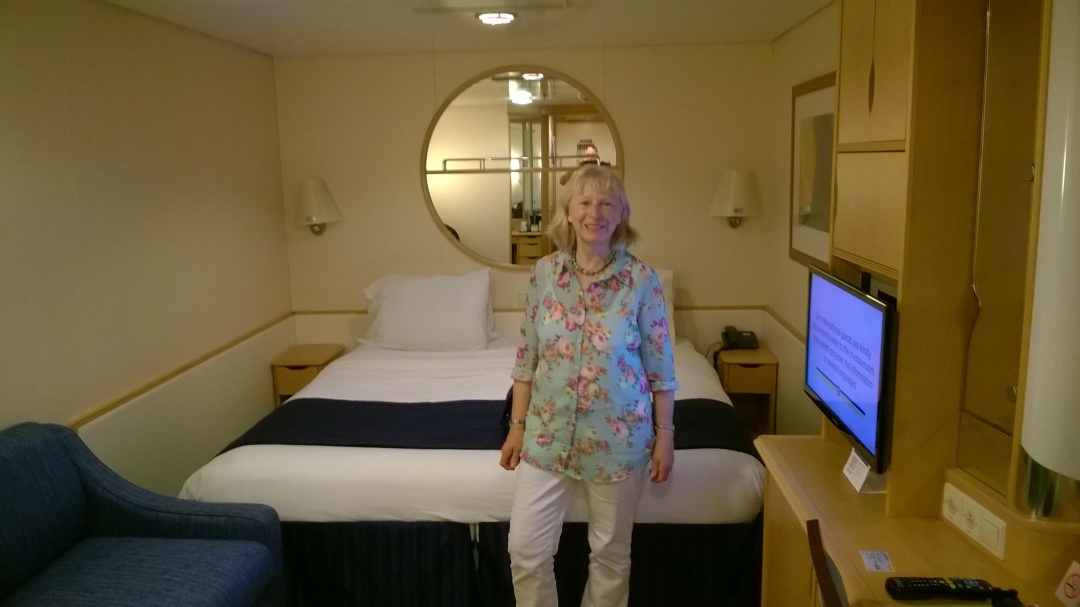 At 4.45pm we made our way to our muster point in the theatre for the obligatory life-boat drill. However, we never actually left the theatre or had to take our life-jackets with us. I guess they have had to make cutbacks and probably privatised the life-boats.

Eventually we were released and on return to the cabin found that my suitcase had arrived. With clothes all stored away we returned to the deck to watch the ship leave port. It was a shame that at that moment a storm swept across the harbour to spoil everybody’s photos of the Opera House and Harbour Bridge, though I bet quite a few caught great shots of the lightning flashes  over the Sydney skyline. I wasn’t one of them. 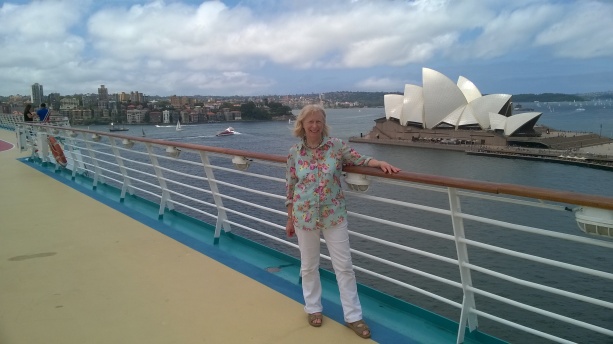 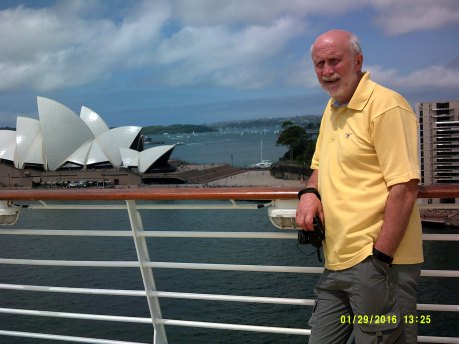 The evening meal dress code was smart casual and properly attired we queued at the Sapphire Restaurant for 8pm. We had been allocated a table and were looking forward to meeting our fellow diners. We were placed on a table of 8. However, no-one else turned up. We suspect that the mainly Aussie passenger list prefer informal dining, such as barbies.  As very few tables had a full compliment, we presume it wasn’t a statement by the Republican movement and that people couldn’t be bothered on the first night. Tomorrow will tell.

After our spot of fine-dining we made our way the full length of the ship for the nights entertainment. First the ships resident band played a few numbers and then a Turkish comedian took the stage. He was obviously well known by the audience from his TV shows on ABC and many of his jokes went over our heads but much appreciated by those around us. None the less, his ad-libs were funny (those we understood) and he was entertaining. 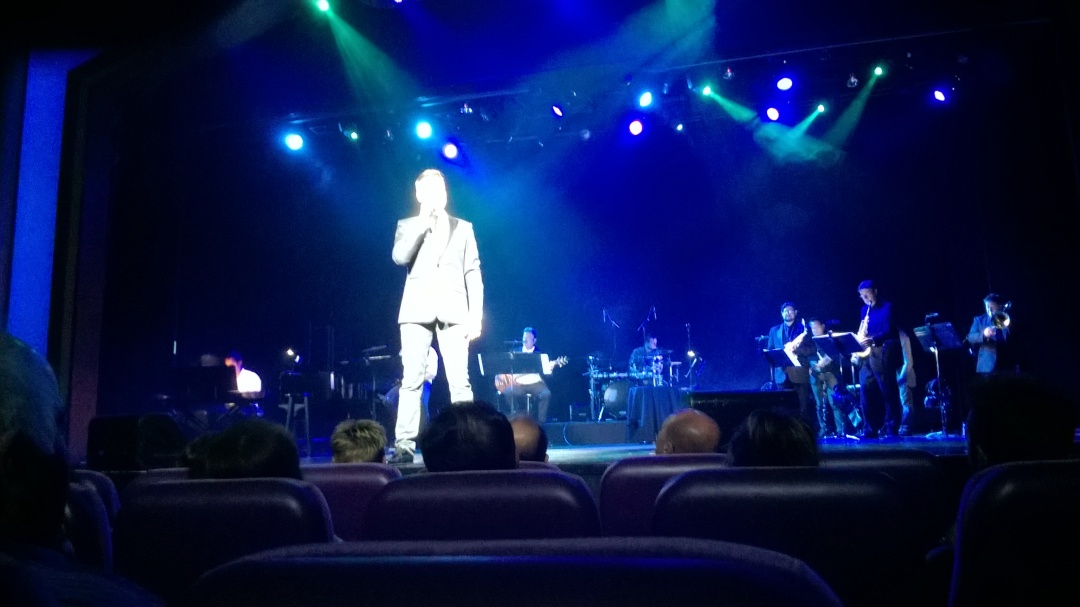 Afterwards we retired to our cabin and lights out.